‘This Hateful Movie Is Not Worth A Drop of Blood’

And so the violence associated with a vile, hate filled movie escalates. Why can we not fight hate with wisdom and rationality? 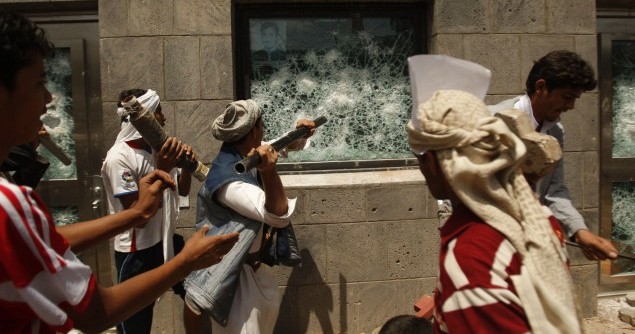 The appearance on YouTube trailer for the film “The Innocence of Muslims” was directed and (maybe produced) by a Los Angeles man convicted in 2009 of bank fraud. Sam Bassil who intentionally and maliciously mislead people to believe he is an Israeli American assumes many nationalities and several pseudo names among them Sam Bacile, Nakoula Basseley Nakoula, Mark Basseley Youssef, Yousseff M. Basseley, Nicola Bacily and Malid Ahlawi. While Bassil publicly admitted he is the director/manager of the heinous YouTube clip- but does his video clip merit the innocent blood of Americans, Libyans, Egyptians, Yemenis and the countless others who have been maimed or injured since?

The man of many names and his unstable self described Christian neocon friend Maurice Sadek are associated with the National American Coptic Assembly, a small fringe group of highly unusual and bizarre political affiliations that accounts for 24 members- most of whom are American Evangelists.

Bassil and Sadek promoted their film directly to Egyptians through facebook, email postings, and several blogs maintained by Sadek. In Arabic they posted on their facebook pages grossly misleading and false announcements and an open admission. They claimed on Tuesday September 11th, 2012 a major Hollywood production company and a famous producer are releasing “The Innocence of Muslims” featuring many critically acclaimed Hollywood actors to commemorate 9/11. In Bassil’s words the film is “mouseei” (disparaging) of prophet Muhammad and Muslims – as of Thursday both Bassil and Sadek erased their trail of vile postings on facebook.

On September 5th Sadek began a targeted hyper campaign to promote the video clippings to Egyptians whom he seems most interested in offending. He posted pictures of the infamous Muslim hater and Christian fundamentalist extremist Terry Jones whom he claimed is serving as the judge of an international court hearing that will proclaim Islam is a false contrived religion.

With foul Arabic pornographic commentaries he described the content of the film that explores the life of Prophet Muhammad.  Sadek announced Tuesday the 11th will mark a worldwide release of a film that has yet to be featured and a sentence to be rendered by a militant hateful preacher in a fictitious US courthouse that has yet to commence.

Protesters argue that hate speech in the US against Muslims is veiled as free speech- and while many would agree, especially Muslim Americans who have suffered the wrath of unspeakable derogatory and inciting commentaries since 9/11- but none would approve of this weeks’ angry and sometimes deadly protests. Only peaceful protests and constructive exchanges can improve the current discourse- informed rationality is the most productive manner to address justifiable concerns.

While the YouTube video clip is despicable and absurd it has already cost too many innocent lives and left in its wake many grieving mothers, fathers, brothers, wives, and children. No sane Muslim can accept the murder of anyone – the moral cost we all carry for rash acts of violence are too heavy to bear – it is morally and ethically wrong and most critically these violent actions contradict the tenants of the Muslim faith.

How can anyone justify violence against innocent Christians, Muslims, Jews or any one else – Enough that Libya’s Ambassador Chris Stevens, three of his collogues and more than ten Libyans, Egyptians and Yemenis lost their lives to a YouTube clip they had no part in, knew nothing about and we know would have never condoned.  How can we bear knowing the senseless infliction of pain and suffering unleashed for many years to come on countless of people who lost their fathers, husbands, brothers, uncles, sons, and nephews senselessly? It is time for Muslims to take the words and deeds of their messenger to heart and rise and speak against this emotional rampage. Yes, the video is upsetting; disrespectful of every faithful; and merits indignation and large peaceful protests demanding an apology- but never does it justify this kind of violent destructive reaction.

Secretary of State Hillary Clinton articulated the best response “To us, to me personally, this video is disgusting and reprehensible. It appears to have a deeply cynical purpose, to denigrate a great religion and to provoke rage. But as I said yesterday, there is no justification, none at all, to responding to this video with violence. We condemn the violence that has resulted in the strongest terms. And we greatly appreciate that many Muslims in the United States and around the world have spoken out on this issue.”

These recent tragic events should be analyzed and weighed carefully by both Americans and Muslims. And Yes be prepared many Muslim haters will follow Sadek and Bassil’s script to ferment anger and misunderstanding especially among Arab Spring nations still struggling to establish their fledgling democracies. Where both citizens and government are still wrestling with how to balance and cope with their newly gained rights of self-expression; freedom of assembly; while still learning how to manage and maintain the rule of law. But before jumping to action measure and weigh the relevancy, authenticity, and character of these instigators…

What we need now is wise reflective leadership both here in the US and the Muslim World. No need to incite the shedding of more blood to avenge those innocently killed or use violence to object to a repulsive video clip purposely produced to elicit the angry reaction that has consumed many in its path – wisdom, rationality and sound judgment are the only effective anecdote to combat hate.