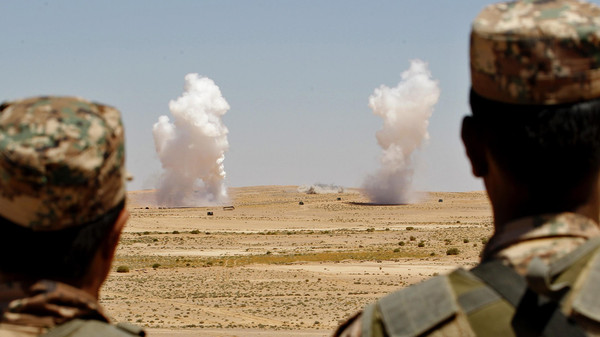 Between our collective fish-memory and the tendency to leap-frog steadily from one issue to another, it can be fairly confusing to keep track of things. Especially when it comes to the external threats that come with Jordan’s geographic fate of sitting ‘between Iraq and a hard place’.

Rewind to last year, when our eyes looked north to Syria. The waves of refugees and the economic impact concerns aside, promises of retaliation and Asad’s menacing cache of chemical weapons seemed to be on everyone’s mind. Obama’s mid-year posturing and the public contemplation of a strike helped turn the national rumor mill, which continues to spin, and our anxiety is fed infrequently with peppered headlines of Jordanian security forces defending the border from approaching danger, to say nothing of the more recent ensuing drama that came with expelling the Syrian ambassador for ‘insulting Jordan’.

The new year saw the ‘Syrian fear’ replaced largely with a reliable old classic: Israel. Suddenly, everything was about the conspiracy-laden peace plan that would surely see the demise of Jordan and the establishment of a Palestinian state on its soil (see: Who’s Afraid of an Alternative Homeland?). These fears quickly turned to anger with the rather cold-blooded killing of a Jordanian judge by Israeli forces. Protests in the street; Israeli flag burnings. Aside from demonstrating parliament’s impotence, demands for the expulsion of the Israeli ambassador by Jordanian parliament was – much ado about nothing.

Fast forward to June, and the eyes of the nation turn to the eastern border, where ISIS in Iraq has taken the place of Israel and Syria, declaring their intentions to bring their Islamized mess to Jordan. A glance at all the headlines and the impression you get is one of Jihadi fighters marching towards Amman.

The truth is, it feels like most of us simply do not know what exactly is going on, and the confusing scene just adds to the fear. Between the persistent flaring up of events in the southern governorate of Maan in recent months, where Islamists there declared it the “Fallujah of Jordan”, and potential blowbacks from the US training of ISIS members, to apparent infighting between extremist groups in Jordan  – the foreign threat of ISIS is perceived to be closer to home than ever before. And while security forces and people trade tear gas and bullets on the streets of Ma’an throughout this ongoing clampdown, the Border Guards gave a media tour to emphasize that all is calm on the eastern front (and that media is prone to exaggerations).

Look north. Look west. Look east. Fear Syria. Fear Israel. Fear ISIS. Fear chemical weapons. Fear terrorism. Fear having your country rebranded overnight. It’s enough to convince you that the infamous frown we Jordanians wear on our faces is really just a result of being in a constant state of apprehension.

There will always be plenty to be scared about. There will always be new foreign threats – this region offers few surprises in that regard. But these external threats also seem to come and go. They shift in importance, in size, in urgency, and in relevancy. Their actual impact is limited by the extent of our domestic threats, and those ones always outnumber and outweigh anything the region seems to throw at Jordan. Poverty, unemployment, education, public transportation, domestic violence, crime, etc – these are just some of the major domestic threats that seem constant, or at least have been for the longest time. Connecting these foreign-and-domestic threats together has centered on the conventional wisdom that tells us high levels of poverty and unemployment coupled with a conservative environment is (arguably) ripe for Jihadist recruitment.

Connecting these threats is something the state does all the time. In the past few months alone – perhaps with so much fear on our plates – terrorism has resonated throughout the political arena. We have seen controversial amendments introduced to the anti-terrorism law, with, in typical fashion, vague definitions.

We’ve seen organizations like Reporters Without Borders saying: “There is a danger that the Jordanian authorities will use the fight against terrorism to gag civil society organisations and news media…” and that “the amendments… constitute a disturbing reinforcement of the already repressive legislative arsenal.”

We’ve seen Human Rights Watch say that “Jordan’s legitimate security concerns don’t give the government a green light to punish peaceful criticism of foreign rulers as terrorism,” and that Jordan “ought to be increasing the space for public criticism and debate rather than limiting it.”

We’ve seen a new telecom law that infringes on personal privacy rights, in the name of public safety; in the name of foreign threats. To say nothing of last year’s amendments to the Press and Publications law that co-opted online news media.

There will always be plenty to be scared about. But while I accept the existence of foreign threats as just another reality of living in a bad neighborhood, I can’t help but be more concerned with the manner in which the state leverages those threats on the domestic front. Raising prices in such an apprehensive atmosphere is a debatable move, but I can’t help but wonder, after everything Jordanians have to deal with, what happens when you further tighten the reigns on speech and expression; what does that do to all those foreign threats? Does it quell or compound them?