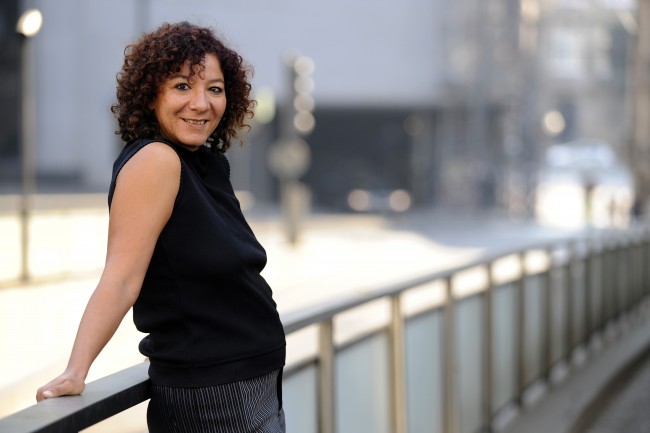 Cairo-based journalist and researcher Alexia Underwood sat down with controversial Egyptian author Mona Prince to discuss her writing, her activism, and the future:
By Alexia Underwood

On a hot day in May, Mona Prince sips a gin and tonic by the Red Sea and regales a small group with her tale of getting kicked out of the University of Iowa’sInternational Writer’s Residency program. During her visit to the US, Prince was intent upon visiting a Native American reservation. This was not, it turns out, on the official roster of approved events. After a heated email exchange and some appeals to the US embassy in Cairo, Prince was asked to leave; but her only contact in the area lived an entire state away. “And that, you see, is I how I ended up getting to see Nebraska,” she concludes, laughing.

Prince is many things – writer, academic, activist, former presidential candidate, some might say contrarian – but first and foremost she is herself. And it is this presence of self, accompanied by a blunt, slightly mischievous sense of humor that comes through in her narrative account of the 18 days of the 2011 Egyptian revolution, which is due to be released in the fall in English translation by the American University in Cairo Press. (Translator: Samia Mehrez, founder of AUC’s Center for Translation Studies.)

Prince’s writing trajectory began after she graduated from Ain Shams University with a degree in English literature in the early 90s. She was first influenced by leftist writer Radwa Ashour, who was one of her professors; later, Ibrahim Aslan helped her publish several short stories in Al Hayat newspaper.

She continued to rise, publishing work in most of the established literary journals at that time. She published her novella Three Suitcases for Departure in 1998, for which she received a state literary award. Her novel So You May See appeared in Arabic in 2008 and was later translated into English by Raphael Cohen. The book details a psychologically complex love affair, which, according to reviewers, employs humor and eroticism and attempts to upend traditional notions about women.

“I stopped working on the short stories because the last one in that volume was entitled “Deviance is the Solution” – it has to do with corruption and bribery. When the revolution happened, I thought, ok, I can’t publish this now,” she says. Prince sensed that a sea change was on the way.

In 2011, Prince was composing stories based on her experiences taking public transportation throughout Egypt and dealing with various social, economic, and educational issues when the revolution broke out.  “I stopped working on the short stories because the last one in that volume was entitled “Deviance is the Solution” – it has to do with corruption and bribery. When the revolution happened, I thought, ok, I can’t publish this now,” she says. Prince sensed that a sea change was on the way.

The 18-day period before Mubarak’s fall was life-changing for the writer, in more ways than one. Prince’s experience in the squares protesting alongside men and women from all different walks of life effectively transformed her from a politically disengaged writer and academic into an activist, and the book she produced – Ismi Thawra (Revolution is my Name) – bears witness to this. It’s a narrated account of the 18 days which includes bits of poetry, newspaper headlines, songs, Facebook posts, and snippets of dialogue between the protagonist, the police and fellow protesters. Prince felt that she had to write the book as quickly as possible. ”This is history,” she says. “When I started writing, I had two things in my mind. I wanted to write this story because it was related to me, my experience, and also becauseI knew that it was going to be falsified, that history was going to be changed.”

But Revolution is My Name doesn’t seek to place the revolutionary moment in its historical context or predict the future. Instead, it expresses the lived day-to-day experience of protesting (sleeping at Merit Publishing House, running into family members in the squares) and illuminates class divides in Cairene society by way of humorous, pitch-perfect dialogue and vivid scenes. Prince ends the book on a high note: her protagonist, giddy with joy, sings along to a classic Suad Hosni song, improvising new lyrics. “Pink, pink, my life is pink without you, Hosni,” she sings. “Without you, Hosni, life is now pink.”

In his review of the book for Jadaliyya, Elliott Colla explores the creation of collective memory in Prince’s work and praises her ability to draw out a particular type of “pragmatic humanism” from the chaotic political events swirling around her. Prince effectively depicts the feeling of camaraderie and solidarity that marked these 18 days, and left her with renewed hope in the Egyptian people.

Once she completed the book, Prince decided to look beyond the established publishing houses in Cairo and take the self-publishing route.

Once she completed the book, Prince decided to look beyond the established publishing houses in Cairo and take the self-publishing route. She printed close to 1,000 copies and hand delivered the book to bookstores around Cairo – Diwan, Madbouly among others. She still keeps several copies with her at all times.

Some writers would be content with producing work that reflected on such a significant political and historical shift, but Prince was inspired to do more. She decided to run for president. “I thought, now is the time to do something,” she says. “I wanted to break taboos, break stereotypes, get involved. We weren’t sure if the elections were going to happen or not [under SCAF] but the idea was to let the people know that there were different possibilities.” Prince failed to garner enough signatures to make it on the ballot, but said that the conversations she had about the country and ways to move forward were achievement enough. She’s currently finishing a short story about the experience.
Prince has remained engaged with politics since the presidential run to varying degrees. After the Egyptian armed forces removed former President Mohamed Morsi from power in July of 2013, Prince expressed views on Facebook lauding the army and generally supporting their actions. Of her current political stance, she says that its “complicated” but emphasizes that she rejects Islamist rule in any country and doesn’t want to see Egypt become “another Syria, Iraq, Libya, Palestine.”

While critics may question why another book on the Egyptian revolution is needed at this point in time, the fact remains that there is a dearth of literary accounts of the Egyptian revolution in English, and of these, very few are written by women. Ahdaf Soueif’s My City, Our Revolution and Nariman Youssef’s Summer of Unrest: Tahrir – 18 Days of Grace constitute some of the sole examples.

In the coming months, Prince will be traveling once more to the U.S. to be a visiting professor at Claremont College in California, and she’s hoping the experience will provide her with fodder for future writing projects. The 2011 revolution not only left a lasting impact on her character, but her writing as well. “These 18 days are iconic and if this happened once, it can happen again,” she says. “People were united despite their differences, their different religious, cultural backgrounds, education.  We were together. For me this was the most important period, on which everything else stands.”

Alexia Underwood (@Underwood_AD) is a Cairo-based journalist and researcher who was a CASA fellow (2013-2014). More of her writing can be found at http://alexiadanielleunderwood.com/.