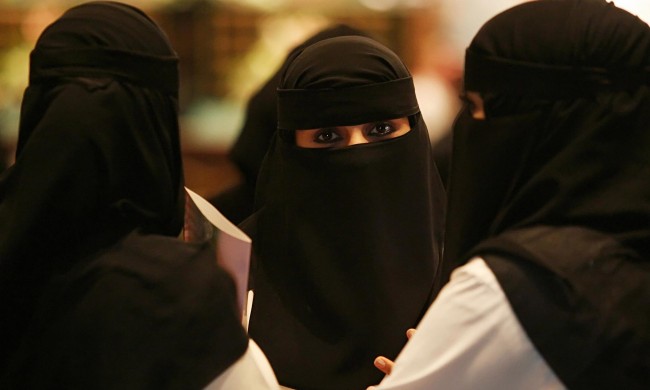 Women’s passion for soccer is not simply love of the beautiful game. It fulfils a need to release pent-up energy and imitate others and endangers their role in a conservative Muslim society that severely restricts women’s freedom, including the right to play football.

That is Saudi psychiatrist Imad al-Dowsari’s analysis of heightened soccer passions among Saudi women during the 2014 World Cup in Brazil. Saudis, including many women, avidly discuss matches, teams’ strategies and referees’ decisions on social media even though their national team didn’t make it to the Brazil finals.

The fact that Saudi Arabia is not represented is however less of a problem for Saudi women, Dr. Al-Dowsari suggests. He estimates that 60 percent of Saudi women support a team because of its elegance and good-looking players rather than what it stands for or how it performs.

Dr. Al-Dowsari noted that large numbers of predominantly young Saudi women, decked out in abayas, the all-covering cloak they are obliged to wear, designed in the colours and logo of their preferred team, under which they sport T-shirts with the same colours and matching nail polish, congregate in coffee shops to watch World Cup.

“It is not a psychological condition, but kind of imitating people around them in highly emotional situations. It is also an outlet for women to release their pent-up energy,” Dr. Al-Dowsari told the Saudi-owned, pan-Arab Al Hayat newspaper, noting that women had fewer opportunities to release energy in the kingdom.

Dr. Al-Dowsari warned that female passion could lead to women sporting accessories with pictures of their favourite player. He said women’s enthusiasm threatened to affect their social role in a country where women are banned from driving or attending sporting events, largely dependent on a male relative, and in which women’s soccer exists at best in a legal and social nether land.

Dr. Al-Dowsari’s comments, seemingly in support of conservative ambiguity towards women’s sports, appear to be at odds with a significant segment of Saudi public opinion. A Saudi sociologist concluded on the basis of a survey that the vast majority of Saudis favour granting women the right to engage in sports. The survey conducted by Mariam Dujain Al-Kaabi as part of her master thesis showed that 73.5 percent of the respondents unambiguously endorsed a woman’s right to engage in sports while 21.6 percent felt that it should be conditional.

Saudi Arabia has no official facilities for female athletes or physical education programs for girls in public schools. Spanish consultants hired to draft Saudi Arabia’s first ever national sports plan were instructed by the government to do so for men only.

Saudi Arabia alongside Yemen was moreover the only Middle Eastern nation that refused to sign on to a campaign by the region’s soccer associations grouped in the West Asian Football Federation (WAFF) to put women’s soccer on par with men’s football.

Human Rights Watch last year accused Saudi Arabia of kowtowing to assertions by the country’s powerful conservative Muslim clerics that female sports constitute “steps of the devil” as well as a corrupting and satanic influence that  would spread decadence. The clerics warned that running and jumping could damage a woman’s hymen and ruin her chances of getting married.

Concern that the World Cup could lead to violations of Saudi Arabia’s strict gender rules prompted authorities in the province of Mecca, home to Islam’s holiest city, to remove public television screens to prevent men and women from mixing.

The move sparked protests on social media. “Those who removed the screens showing the World Cup in the gardens didn’t do it because of mixing but because they love to kill peoples’ pleasure,” thundered an angry soccer fan on Twitter. “If a person is sitting with his family, and he is in charge, what kind of mixing are they talking about?” asked another.

In neighbouring Qatar, the only other state that adheres to Wahhabism, the puritan Islamic interpretation of Islam that predominates in Saudi Arabia, and that has made sports in general and soccer in particular a cornerstone of its policy, clerics warned that the broadcasting of World Cup matches during the night because of time differences meant that youth might skimp on their religious obligations during the holy month of Ramadan which started this week. Observance of Ramadan is one of the five pillars of Islam.

Sheikh Mohamed Al Mahmoud said the faithful should be worshipping and studying the Koran during Ramadan rather than watching football, TV serials and other entertainment programmes. He said there was no excuse for skipping obligatory visits to the mosque in order to be able to watch a World Cup match.

His words were echoed by Sheikh Ahmed Al Buainain who said that the matches conflict with times of the Isha and Tharaweeh prayers. Sheikh Al Buainain suggested that believers tune into television stations that record matches to broadcast them later so that they could be in mosques when prayer times and live World Cup broadcasts coincide.

“When it is time for late evening and Ramadan-specific nightly prayers, people must go to the mosque for prayers. There is absolutely no excuse for a Muslim to skip these prayers,” Sheikh Al Mahmoud said.

The tug of war between soccer and Islam at a time that both institutions are experiencing a key moment in their calendars – soccer with the World Cup and Islam with Ramadan – is part of a larger debate among the faithful that ranges from whether World Cup participants should fast during Ramadan to some jihadist factions targeting fans in Iraq, Nigeria and Kenya because they see the game as an infidel, Zionist conspiracy aimed at distracting believers.

For Ali Hussein El Zoghbi, vice president of the Federation of Muslim Associations in Brazil (FAMBRAS) that has published a guide and an app for Muslims visiting Brazil for the World Cup the resolution of the debate is simple. “The federation has been working consistently for people to find out more about Islam through the correct angle, that of peace and its participation in Brazilian society. And this event provides great visibility and will play host to delegations from countries where the majority of the population is Muslim. We’re making the most to publicise Islam through this project,” Mr El Zoghbi said.