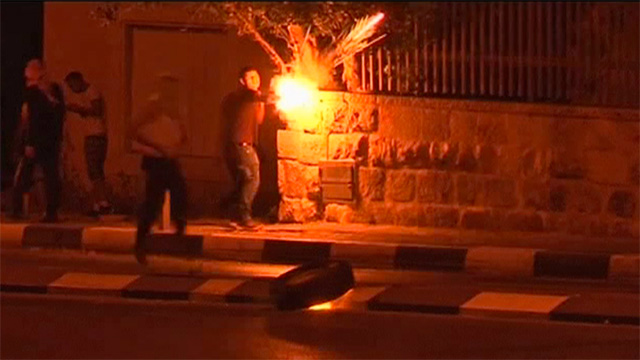 The New York Times story on the arrest of six Israeli Jews for the murder of Mohammed Abu Khdeir, 16, was slightly squeamish about the fact that they are Jewish. It did not identify them as Jews in the first paragraph: “the Israeli authorities arrested six Israelis on Sunday in the killing of a Palestinian teenager, found beaten and burned in a Jerusalem forest last week.”

That information was withheld till late in the second paragraph: “Moshe Yaalon, the Israeli defense minister, said in a statement that he was “ashamed and shocked by the cruel murder,” describing those behind it as “Jewish terrorists.”

An Israeli police spokesman, Micky Rosenfeld, said there was a “strong possibility” that the motive for the killing of Muhammad Abu Khdeir, 16, was “nationalistic,” indicating that it was a revenge attack by right-wing Jewish extremists
BBC was more frank about the Jewishness of the suspects: “A number of Jewish suspects have been arrested over the murder of Palestinian 16-year-old Mohammad Abu Khdair, whose death sparked days of violent protests.”

Israeli police told the BBC that the teenager, abducted on Wednesday morning and found dead hours later, was killed “because of his nationality”.

Haaretz is also blunt about the terrorists’ Jewishness. In fact, it thinks that fact is important. It published a searing editorial expressing horror at the murder of Abu Khdeir and the vicious beating of his cousin, Tarek Abu Khdeir, an American.  In a wake-up call to all Zionists and to the Jewish establishment in the U.S., it summoned readers to regard these crimes as flowing from the definition of the “Jewish state:

“Abu Khdeir’s murderers are not “Jewish extremists.” They are the descendants and builders of a culture of hate and vengeance that is nurtured and fertilized by the guides of “the Jewish state”: Those for whom every Arab is a bitter enemy, simply because they are Arab; those who were silent at the Beitar Jerusalem games when the team’s fans shouted “death to Arabs” at Arab players; those who call for cleansing the state of its Arab minority, or at least to drive them out of the homes and cities of the Jews…

Prosecuting the murderers is no longer sufficient. There must be a cultural revolution in Israel. Its political leaders and military officers must recognize this injustice and right it. They must begin raising the next generation, at least, on humanist values, and foster a tolerant public discourse. Without these, the Jewish tribe will not be worthy of its own state.”

CNN’s Jake Tapper quoted the Haaretz editorial yesterday when he grilled Israeli spokesman Mark Regev about what caused the murders. He pointed out that few attacks by “Jewish settlers” are ever prosecuted and quoted Haaretz saying that many Israelis are part of a “vengeful, vindictive Jewish tribe whose license to perpetrate horrors is based on the horrors that were done to it.” And Tapper is Jewish.

So again, why the squeamishness? One of Netanyahu’s demands of the Palestinians was that they must recognize Israel as the Jewish state, and he always speaks of himself as the leader of the Jewish people.

Today, supporting Israel has been ingrained in Jewish life in the United States.
Here’s a bizarre statement in the Tampa Bay Times, from a fellow Floridian on the beating of Tampa resident Tarek Abu Khdeir: “They’re giving this kid more publicity than he deserves,” said Bob Kunst, a longtime pro-Israel activist in South Florida who plans a protest in Broward County today demanding that the Israeli military strike Hamas. “That whole thing has turned into a major propaganda victory for Abbas and the Arabs.”

Kunst is president of an organization called Shalom International. This is how they begin their “About Us” page:
“Yes, we are Jewish. Big Time!”

Some folks aren’t squeamish at all.