People of the Book: Damning the Exodus of Christians 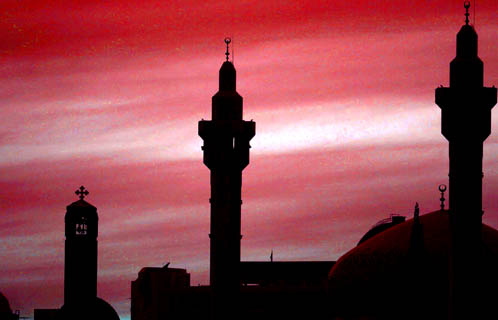 The latest round of sectarian strife in Egypt has brought the issue of Christians in the predominantly Muslim Middle East back to the fore.   I do not believe that what we have witnessed in Egypt is a sectarian confrontation.   It is ignorance.

If one is interested in a game of one-upmanship then there are many resources available for proving or disproving why one religion is superior to the other, more righteous, correct, genuine, true etc.  If comparing and contrasting one might as well extend the argument to the differences and subsequent advantages/disadvantages, between social classes, races, gender, sexual orientation, etc.

None of that interests me.  I, for one, am grateful for the blessing of having Christians in the Middle East.   It makes for a more diverse, culturally rich existence that, in my view, promotes understanding.  There will always be an undercurrent of rivalry and, sadly, flashes of violent confrontation as witnessed in Egypt over the past decades.

It is important to note that Christians in the Arab world have not, in general, spent the better part of the past 14-plus centuries getting slaughtered by Muslims.  I strongly recommend Zachary Karabell’s People of the Book: The Forgotten History of Islam and the West for an in-depth study of the subject.

When states across the centuries have been prosperous, successful and secure minorities have not had major problems.  And the reverse is true.  Think of the global financial crisis of the past few years and the accompanying rise of the anti-immigrant politics, sentiment, and attacks in Europe and the United States.

Thus the Armenians, for example, lived their lives for several hundred years under the Ottomans as other religious minorities did; not in line with 21st Century standards but in generally quite acceptable conditions for that time and age.  It was the decay and eventual collapse of the Ottoman Empire and rise of Turkish nationalism (Young Turks) that led to the terrible genocide perpetrated against the Armenians between 1915 and 1917.

It is worth recalling here the words of French philosopher Jean Bodin describing the Ottoman Sultan Suleiman in the Six Books of the Republic (1576): “The great emperor of the Turks doth with as great devotion as any prince in the world honor and observe the religion by him received from his ancestors; and yet detests he not the strange religions of others; but to the contrary permits every man to live according to his conscience… and suffers four diverse religions: that of the Jews, that of the Christians, that of the Grecians, and that of the Mahometans.”

Incidentally, while the West has almost always described Suleiman as the Magnificent, in Turkish he was kanuni Sultan Sulayman, ie Suleiman the Lawgiver.   He is one of only 23 famous lawmakers whose likenesses adorn the walls of the US House of Representatives.

With the Spanish reconquest of Iberia the Jews of Spain sought and were given shelter by the Ottomans.  And it was in Muslim Spain that the world witnessed the grandeur of a society that brought together Jew, Christian and Muslim.

Today the Christians in the Arab world face a stark reality.  The Arabs have lived under occupation, colonization, mandate or in defeat for the better part of the past few centuries.  That the Ottomans, fellow Muslims, ruled for a few hundred years large tracts of Arab lands and peoples tempers the fact but does not entirely remove the sting for they are guilty of their own transgressions.  A nascent Arab nationalist movement (end of 19th-early 20th Centuries) strongly influenced by Arab Christians came to naught.  At the end of World War I and with the collapse of the Ottoman Empire Western powers carved the region with scant regard for its native inhabitants.   With a newly born Israel in the background, the advent of Gamal Abdul Nasser and his Free Officers movement in 1952 prompted the Arab masses to believe that salvation was at hand.   Instead Nasser eventually oversaw the loss of what remained of Palestine and set the stage for copycat coups branded as “revolutions” in Syria, Iraq, Sudan and Libya.

Still Arab Christians remained influential.  Michel Aflaq established, with Salah al-Bitar, the Arab Baath (Renaissance) Party.  The Arab defeat in the 1967 war dealt a severe blow to Nasser but empowered the Palestinian guerrilla movement.   Among its most influential characters was George Habash, a Christian.   A secular current still permeated the Arab world.   It all came to an end in the mid-to-late 1970s with the gradual disengagement of Egypt from the Arab world and the outbreak of the Lebanese civil war in 1975.

While the right-wing Lebanese Christians sought, and received, Israeli and then Syrian assistance, left-wing Christians fought on the other side of the conflict alongside their Muslim brethren and the PLO.  And while Christian east Beirut was essentially cleansed of its Muslims inhabitants, thousands of Christians, Lebanese and Palestinian (including George Habash), continued to live and thrive in Muslim west Beirut.  At the beginning of the conflict innocent civilians were murdered because of the sect indicated on their ID cards-hence “ID killings”.  A couple of decades later while researching my War of Lebanon documentary I was told a joke which was presented as a true story: a fighter incensed at the slaughter of Muslims declared, “I want to slaughter a Christian,” to which his companion replied, “I have an excellent Christian for you to murder.”  “Really, who?”  “George Habash.” Silence…

Today, resistance in the 1980s to Israel’s occupation of Lebanon is wrongly attributed to Hezbollah.   In fact it was the secular parties that established the Lebanese National Resistance Front in 1982 and these parties were either led by or included Christians in their ranks.   One of underground resistance commanders was Elias Atallah, a Maronite Christian.

I point this out because today Christians in the Arab world are described by either errant, extremist or fundamentalist Muslims as outsiders or even kuffar, non-believers.  However, the Quran clearly establishes that Christians and Jews are people of the book with whom Muslims can freely interact and even marry.

The bankruptcy of the Arab nationalist movement gave rise in the 1970s to Islamism.  The momentous assassination of Egyptian President Anwar Sadat in 1981 heralded the birth of the reputation of modern-era Muslim militants as fearless and fearsome.  The stage had already been set by battle for the representation of Islam.   It pitted on one side a still-shaken puritanical Wahabi Saudi Arabia, fresh out of the earth-shattering occupation of the Grand Mosque in Mecca in 1979 by Juhayman al-Otaibi and his band of followers, and on the other by Ayatollah Khomeini’s Shiite Iran, flush with the success of a popular revolution which the mullahs claimed as their own and set about trying to “export the revolution”.

In the face of Tehran’s zeal the world (ie the West) chose the Saudis who expanded their operations, philanthropic, educational, charitable, etc throughout the world, unhindered.  Nay, they were encouraged.
That influence became evident in the Afghan war (1979-1989) when thousands upon thousands of young Arabs poured into Afghanistan to join the jihad against the “Godless” Soviets.   Enter Usama bin Laden.

To defeat its archrival the USSR, the United States had created the foe with which it would do battle into the 21st Century!

The rise of political Islam meant, by necessity, the eclipse of secular currents in Arab societies.  While the late (and devout) Yasser Arafat surrounded himself with Palestinian Christians and never tired of repeating “our Christian and Islamic holy sites [in Palestine]” his words were lost amid the din created by Islamist Hamas which viewed things through a singularly Muslim kaleidoscope.  To be labeled secular was equal to an accusation of heresy.

Inevitably that meant the Christians also suffered.   Grasping at straws, Islamists saw in “resistance” the only path to victory.   In Hamas-ruled Gaza Christians became a target, Hosni Mubarak’s age of mediocrity in Egypt witnessed further sectarian strife, Iraqi Christians suffered terrible attacks in the post-Saddam era and French monks were gruesomely murdered in Algeria.  At the same time the Muslim populations were languishing under the some of the most brutal regimes in the world.

It is hardly surprising that the end product was increasingly insular, almost xenophobic societies that clung and cling to what they perceive as their only salvation: religion.

The suffering of minorities is not restricted to Christians.  The Kurds have endured great injustices and violations in Iran, Iraq, Syria and Turkey.   Unfortunately the current turmoil in the Arab world as a new chapter of history is being written means little time is given to address the issue of religious and ethnic minorities in the Arab world.

But it will be a shame if the exodus of Christians from the Arab world continues.   We will all be the poorer for it.  They are an intrinsic part of the fabric of our societies in the orient and have made great contributions.   Where would we be today without the Taklas who established the Egyptian daily al-Ahram?  And Gibran Khalil Gibran’s sublime literature?  Or the wondrous voice of Fairuz, the Lebanese diva?

What kind of an Arab world would it be without Christians to visit and celebrate with on Christmas and Easter, and to receive in Muslim homes during Eid?

For me it means emptiness and a profound sense of sorrow.

It is not Islam that should be blamed for what we are witnessing.  Nor Christianity.  It is ignorance, nurtured and preserved by decadent and bankrupt regimes and movements and overseen by a world more interested in a constant supply of oil and the mirage of regional stability in an area that has witnessed since 1948, on average, a war every 8 years.

This is a crucial period in the history of the Middle East.  It is either a new era or a false dawn.  The desire for liberty is genuine, the hope for a bright future real.  Somewhere in the plans being initiated for reformed systems of government must be a place, a cornerstone, for tolerance and understanding.  Religion is faith, it is belief, not a sword brandished nor a diktat imposed.  The religious and the men of religion, of which I’m not, need to speak to their followers, to preach the message of peace, because that’s what religion is all about. Or so I believe.

One Response to People of the Book: Damning the Exodus of Christians