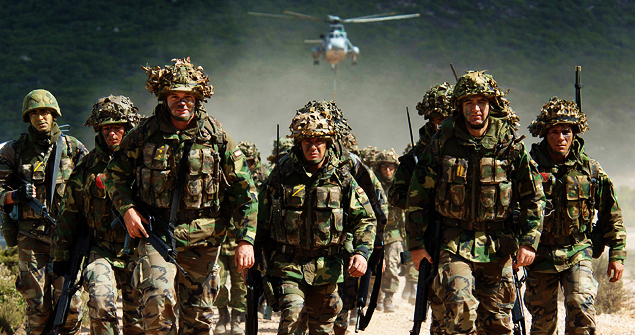 Nato made a tragic mistake when it gave itself the authority to get involved outside its core territory of Europe and North America. Set up in the aftermath of the Second World War, it was brilliantly successful for many decades as an alliance which had the sole purpose of mutual defence. Nato was not designed to attack anyone, and for decades it was a bulwark against Soviet and Communist aggression.

It is sad that millions of young Arabs and Muslims will no longer see Nato as the heroic defender of democracy, but merely as an American-led expeditionary force which strikes at the convenience of the White House, conquering Afghanistan and destablising Libya, but refusing to get involved in Syria. The obvious lack of consistency and failure of principle has trapped Nato in a moral morass of its own making

There is no reason for Nato to be involved in Afghanistan, other than the military convenience of the United States. When it was assaulted by Al Qaida terrorists in 2001, George W Bush’s administration invoked Article 5 of the Nato Charter and for the first time ever the entire alliance found itself at war.

But Nato was set up for conventional war, and the founders of the Treaty did not envisage the alliance being use to track down terrorists all over the world. Intense global sympathy for the United States in its hour of need caused these doubts to be ignored when American forces led the invasion of Afghanistan to topple the Taliban government which sympathsed with Al Qaida.

Bush’s administration found it much too hard to muster international support for its actions in the United Nations, which is the natural place for the world community to come together and communally approve military action. Instead, it used Nato, which also had the huge practical benefit that the troops had trained together for years, shared common understanding of commands and manouevring, and were ready to act together.

But the later invasion of Iraq destroyed any lingering global consensus of support for the United States, so that action remained outside Nato, and famously did not even get a clear mandate from the United Nations despite the unfortunate Colin Powell being sent out as Secretary to State to seek support using ‘evidence’ of weapons of mass destruction from the famous Dodgy Dossier.

These two actions in Afghanistan and Iraq followed Nato first offensive action which was to fight the Bosnian Serbs in the 1990s in the middle of the collapse of Yugoslavia. Politically this action was much less controversial since it was seen as a natural extension of Nato’s basic role of supporting democracy in Europe.

As the defender of the democracies of western Europe, Nato had engendered international trust and won a high degree of support from all sectors of its member states’ populations. But after Communism collapsed in central and eastern Europe, Nato found itself without an obvious role, and under the disastrous leadership of George W. Bush it voted to give itself permission to act out of theatre at the 1999 50th anniversary Washington Summit.

In 1955 the original Nato was expanded to include the newly independent West Germany, and this so alarmed the USSR that it rushed to form its own military bloc and the Warsaw Past was born in 1956.

The balance of fear standoff between East and West continued for decades, but the implosion of Communism handed victory to the democracies of Nato. Nato and the European Union prepared to help the emerging new nations of central Europe as the Warsaw Pact failed.

Sadly, similar thinking dominated after the collapse of the USSR, when the new Russia was made to feel very unwelcome by the Cold Warriors of Nato, who rushed to sign up all the USSR’s former vassal states but deliberately left Russia out in the cold.

It would have been hard to incorporate Russia into the alliance, but Europe and the United States should have provided more willing help and support to the newly emerging Russia, and so encouraged a more open politics. Instead, the paranoia engendered by Nato’s acts has helped build Putin and Medvedev’s charade as the former KGB officer maintains his iron grip on power.

Nato’s most recent military expedition was to support the rebels in Libyan and to help topple Muammar Gaddafi. Again, this was done for military convenience and allowed the participating air forces to operate out of Nato air bases in Italy.

But the underlying problem in Afghanistan and Libya is the same: Nato is a military alliance and cannot offer a political solutions. They have to be left to the Afghans and Libyans who have to find their own balance of social and political forces to build a lasting consensus of how they will run their own countries.

Nato should recover its soul and return to defending the democracies of the North Atlantic. International expeditions should be sanctioned by the United Nations, where rigorous political action must be combined with the military excitement. This may be harder to achieve, but it will certainly do more lasting good than Nato’s current roaming the world looking for its next war.