Malala: A Heroine Who Represents the Majority 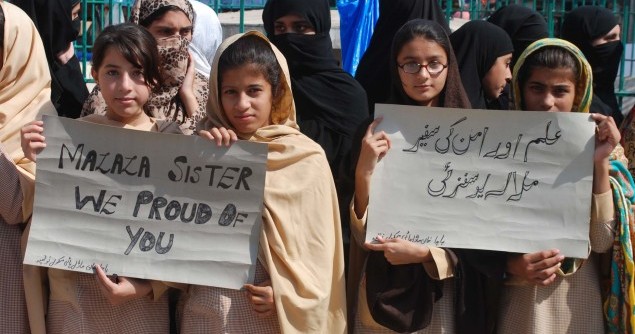 Fourteen-year-old Malala Yousufzai, shot in the head by the Taliban in the Swat Valley of Pakistan for demanding the right to an education, is being moved for further treatment to Britain. She breathed without a respirator briefly on Sunday. The United Arab Emirates sent an air ambulance for her.

Since her shooting, there have been a spate of articles about the demonstrations that have been held in Pakistan (tens of thousands came out in Islamabad) protesting her shooting and condemning the Taliban, with headlines suggesting that Pakistanis are turning against the Taliban because of the incident.

But most Pakistanis have all along been against the Pakistani Taliban and what they stand for. Many blamed them for assassinating former prime minister Benazir Bhutto. When the Pakistani Taliban came down from the tribal belt to the Swat Valley in the Khyber-Pukhtunkhwa Province, the Pakistani military in 2009 went in and cleared them out, and despite temporary massive displacements and sometimes heavy fighting, the operation was popular with Pakistanis and especially the people of Swat. The Pakistani Taliban are a rural, frontier phenomenon in Pakistan, disliked by the Punjabis of the fertile east of the country, despised by the Sindhi peasants of the south, hated by the urbane Urdu-speakers of Karachi. Most of the few thousand Pakistani Taliban are from the Pashtun ethnic group, but the vast majority of Pashtuns reject them. In the last provincial elections in the Pashtun-majority Khyber-Pukhtunkhwa province in the north of the country, voters put in secular Pashtun nationalists, not religious parties.

The Taliban draw for their weird and fringe ideas on a peculiar interpretation of a nineteenth-century Indian Muslim revival movement that concentrated on emulating the sayings and doings of the Prophet Muhammad, called Deobandis. They were reacting against Hindu and British influence on South Asian Islam. But most Deobandis are sort of Sunni Muslim Protestants and not radicals. In the maelstrom of the 1980s, the Soviet Union occupied Afghanistan and the Reagan administration responded with a covert war, funding Muslim fundamentalist guerrillas; the conflict caused a war in which a million Afghans died (out of a then 16 million population), 3 million were wounded, 2 million were internally displaced, 2 million were displaced to Iran, and 3 million were displaced to northern Pakistan.

It was this massive human tragedy, probably worse even than what happened in Cambodia, that produced the hothouse atmosphere in which young Afghan refugee men in Pakistan, often made orphans and having lost everything to foreign Communist occupiers, turned to feverish extreme fundamentalist visions, mixing Deobandi ideas with a radical form of Wahhabism from Saudi Arabia. After the Soviet withdrawal and the faction fighting of the US-backed warlords that was destroying Afghanistan all over again in the 1990s, the Taliban, backed by the Pakistani military, went back into the country and took it over, ruling it in accordance with almost apocalyptic fervor and instituting strange and unheard-of laws that they said were “Islamic.” Because they had all-male schooling and so many were oprhans, they did not necessarily know any women, and appear to have been afraid of them, practicing an extreme misogyny that included a commitment to keeping women illiterate and preventing their public circulation. None of this had anything to do with normative Islam over the vast Afro-Asian expanse where the 1.5 billion Muslims mostly live. It was to Islam what the Khmer Rouge were to socialism.

Only about 12 years ago did some tribesmen of the northern, Federally Administered Tribal Areas of Pakistan (loosely analogous to the Indian reservations of the US) start calling themselves ‘Taliban’– until then it had been a solely Afghan phenomenon. They had become caught up in the US war in AFghanistan, raiding to support their cousins among the Afghan Taliban, and were radicalized. Some were criminal gangs, others were engaged in a kind of class protest against the big landlordism of Pakistan and the high-handed decisions made in Islamabad about their tribal regions. They were especially drawn from the Mahsoud tribe of South Waziristan, though not all Mahsoud were Taliban and some other tribes also produced members of the Tehrik-i Taliban Pakistan.

Many Muslim states promote female literacy. Kuwait, Bahrain, Jordan and many other countries have high rates of it, and the rates are mostly fairly high throughout the Middle East for younger women 18-30, since primary and secondary educational institutions have been increased after the end of European colonialism (which often did not bother to educate locals). The poorest countries, such as Morocco and Egypt, have the worst statistics on education in general and female education in specific. But even in Egypt, among younger women literacy is over 80% now. In Iran, after the Islamic Revolution of 1979, women’s literacy was doubled in a generation to 70% and nowadays the majority of undergraduate students in Iranian universities are women.

Pakistan is even poorer than Egypt and Morocco, and in addition it never had a proper land reform, so it is replete with landless and smallholder peasants and big hacienda owners (who also are the political class), and this social structure tells against high literacy rates. The British left behind a largely illiterate South Asia, with some of the worst education statistics in the world, and the postcolonial governments of Pakistan, India and Bangladesh inherited this deficit. But Pakistan’s elites in particular just haven’t been bothered to spend enough on school provision, and some 40% children are not in school there (mostly these are peasants). Girls are often pulled out of school when they become teenagers in the rural areas, and married off, for fear that otherwise they’ll develop boyfriends, become sluts and bring unbearable shame on the family (in much of the Mediterranean world and South Asia, male honor depends on being able to keep women in the family ‘pure’, i.e. either virgins or properly married). But that phenomenon is more common in rural areas, and has declined in urbanizing, industrializing countries such as Turkey and Indonesia.

Pakistan’s female literacy rate is only 36%, compared to 48% in India. Both are low in Asian terms, and derive from a combination of British insouciance and postcolonial elitism. But for the most part, Pakistani Muslim families would just as soon their daughters were literate– they just can’t get educational resources from the elite government, which has a fixation on military expenditures instead.

So the Taliban are fringe, tiny and highly peculiar and their bizarre ideas have all along been out of sync with the Pakistani mainstream. The Taliban extreme male chauvinism is a huge problem for women in the small areas of Pakistan where they are influential. But arguably, millions of Pakistani women are deprived of an education not by the malevolence of a few sectarians but by the failure of elite men to care to see peasant girls have a school in their village.

Religious radicalism has damaged Pakistan through terrorism, but it hasn’t affected most people’s lives as much as bad governance. If the government does not change its priorities and launch a mass education program, and if it does not catch the wave of increasingly inexpensive wind and solar energy, the situation in Pakistan will go on deteriorating. Higher levels of women’s education would cut down on Pakistan’s hectic population growth, among the highest in the world, which is a huge obstacle to its economic progress.

Malala is a hero and stood up for her rights against terrorists. But the bigger threat to her aspirations and those of other rural Pakistani girls is a government that doesn’t care enough

One Response to Malala: A Heroine Who Represents the Majority