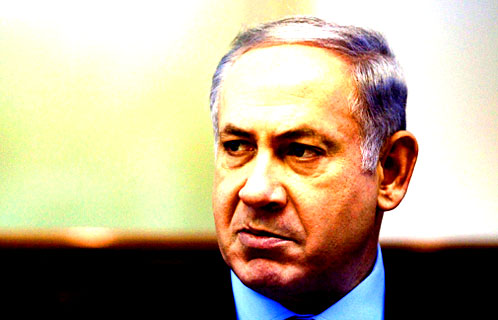 Benjamin Netanyahu’s advisers conceded last week that the Israeli prime minister is more downcast than they have ever seen him. The reason for his gloominess is to be found in Israel’s diplomatic and strategic standing, which some analysts suggest is at its lowest ebb in living memory.

Netanyahu’s concern was evident at a recent cabinet meeting, when he was reported to have angrily pounded the table. “We are in a very difficult international arena,” the Haaretz newspaper quoted him telling ministers who wanted to step up settlement-building. “I suggest we all be cautious.”

A global survey for Britain’s BBC published on Monday will have only reinforced that assessment: Israel was rated among the least popular countries, with just 21 percent seeing it in a positive light.

A belated realization by Netanyahu that he has exhausted international goodwill almost certainly explains – if mounting rumors from his office are to be believed – his mysterious change of tack on the peace process.

After refusing last year to continue a partial freeze on settlement-building, a Palestinian pre-requisite for talks, he is reportedly preparing to lay out an initiative for the phased creation of a Palestinian state.

Such a move would reflect the Israeli prime minister’s belated recognition that Israel is facing trouble on almost every front.

The most obvious is a rapidly deteriorating political and military environment in the region. As upheaval spreads across the Middle East, Israel is anxiously scouring the neighborhood for potential allies.

Unwisely, Israel has already sacrificed its long-standing friendship with Turkey. With the ousting of Hosni Mubarak, Netanyahu can probably no longer rely on Egyptian leaders for help in containing Hamas in Gaza. Israel’s nemesis in Lebanon, Hizbollah, has strengthened its grip on power. And given the popular mood, Jordan cannot afford to be seen aiding Israel.

Things are no better in the global arena. According to the Israeli media, Washington is squarely blaming Netanyahu for the recent collapse of peace talks with the Palestinians.

It is also holding him responsible for subsequent developments, particularly a Palestinian resolution presented to the United Nations Security Council last month condemning Israeli settlements. The White House was forced to eat its own words on the issue of settlements by vetoing the resolution.

The timing of the US veto could not have been more embarrassing for US President Barack Obama. He was forced to side publicly with Israel against the Palestinians at a time when the US desperately wants to calm tensions in the Middle East.

Over the weekend, reports suggested that Netanyahu had been further warned by US officials that any peace plan he announces must be “dramatic.”

Then, there are the prime minister’s problems with Europe. Netanyahu was apparently shaken by the response of Angela Merkel, the German chancellor, when he called to chastise her for joining Britain and France in backing the Palestinian resolution at the UN. Instead of apologizing, she is reported to have berated him for his intransigence in the peace process.

Traditionally, Germany has been Israel’s most accommodating European ally.

The loss of European support, combined with US anger, may signal difficulties ahead for Israel with the Quartet, the international group also comprising Russia and the United Nations that oversees the peace process.

The Quartet’s principals are due to hold a session next week. Netanyahu’s officials are said to be worried that, in the absence of progress, the Quartet may lean towards an existing peace plan along the lines of the Arab League’s long-standing proposal, based on Israel’s withdrawal to the 1967 borders.

In addition, Israel’s already strained relations with the Palestinian Authority are likely to deteriorate further in coming months. The PA has been trying to shore up its legitimacy since the so-called Palestine Papers were leaked in January, revealing that its negotiators agreed to large concessions in peace talks.

A first step in damage limitation was the resolution at the UN denouncing the settlements. More such moves are likely. Most ominous for Israel would be a PA decision to carry out its threat to declare statehood unilaterally at the UN in September. In that vein, Mahmoud Abbas, the Palestinian Authority president, said on Saturday that he expected an independent Palestinian state to become a permanent member of the UN.

The other prospect facing the PA — of collapse or being swept away by street protests — would be even more disastrous. With the PA gone, Israel would be forced to directly reoccupy the West Bank at great financial cost and damage to its international image. Palestinians could be expected to launch a civil rights campaign demanding full rights, including the vote, alongside Israelis.

It is doubtless this scenario that prompted Netanyahu into uncharacteristic comments last week about the danger facing Israel of sharing a single “binational state” with the Palestinians, calling it “disastrous for Israel.” Such warnings have been the stock-in-trade not of the Greater Israel camp, of which Netanyahu is a leading member, but of his political opponents on the Zionist left as they justify pursuing variants of the two-state solution.

Netanyahu reportedly intends to unveil his peace plan during a visit to Washington, currently due in May. But on Monday Ehud Barak, his defense minister, added to the pressure by warning that May was too late. “This is the time to take risks in order to prevent international isolation,” he told Israel Radio.

But, assuming Netanyahu does offer a peace plan, will it be too little, too late?

Few Israeli analysts appear to believe that Netanyahu has had a real change of heart.

“At this point it’s all spin designed to fend off pressures,” Yossi Alpher, a former director of the Jaffee Center for Strategic Studies at Tel Aviv University, wrote for the Israeli-Palestinian dialogue website Bitterlemons. “The object of the exercise is to gain a day, or a week, or a month, before having to come up with some sort of new spin.”

Indications are that Netanyahu will propose a miserly interim formula for a demilitarized Palestinian state in temporary borders. The Jerusalem Post reported that in talks with Abbas late last year Netanyahu demanded that Israel hold on to 40 percent of the West Bank for the foreseeable future.

His comments on Tuesday that Israel’s “defense line” was the Jordan Valley, a large swath of the West Bank, that Israel could not afford to give up suggest he is not preparing to compromise on his hardline positions.

Palestinians insist on a deal on permanent borders, saying Israel would use anything less as an opportunity to grab more land in the West Bank. At the weekend Abbas reiterated his refusal to accept a temporary arrangement.

Herb Keinon, an analyst for the right-wing Jerusalem Post, observed that there was “little expectation” from Netanyahu that the Palestinians would accept his deal. The government hoped instead, he said, that it would “pre-empt world recognition of a Palestinian state” inside the 1967 borders.

A shorter version of this article originally appeared in The National, published in Abu Dhabi.