True Multi-Cultural Hero: The Surprise That Is St George 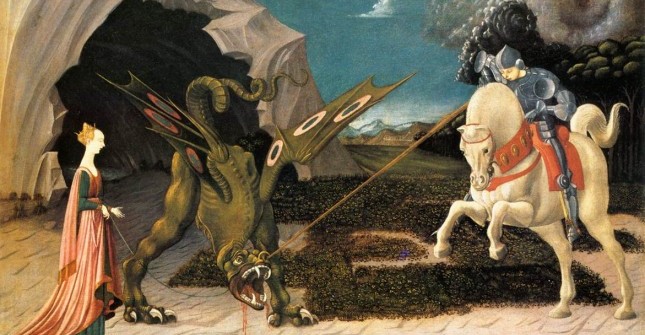 White flags with red crosses have fluttered across England recently as the nation celebrated the day of its patron, Saint George.

Surprisingly, he was not English, but rather Greek or possibly Turkish. He served in the Roman army, lived in Palestine and has been adopted by many countries including England, Egypt, Ethiopia and Iraq. He was killed in 303 AD by the Roman emperor Diocletian for refusing to deny his Christian faith and protesting the persecution of Christians.

Legends from the 11th century onwards recount that he killed a dragon. One of the more famous legends, from the 15th century, tells of how he rescued a princess from a dragon terrorising a village, after which the entire village adopted Christianity.

St George’s life is a story of multiculturalism, migration, social fluidity and the transcendence of human values. Yet bizarrely, he has been adopted by the far right as a symbol of “purity” of the white English.

Poor St George, who died to oppose discrimination and persecution of the “other” is the unwilling poster boy for racism and hatred.

This year, the Christian-Muslim Forum, a London-based charitable organisation aimed at promoting interfaith dialogue, is reclaiming St George to reinstate him as a symbol of unity. Like St George’s adoption into English culture, the forum seeks to address the Islamophobia that is growing in English society with a campaign that suggests that another newcomer to English culture should be embraced. They suggest that the “hijab should be as British as bangers and mash”.

It takes admirable confidence from a nation to embrace the cultures and symbols of a minority, whether those symbols are food embraced by the masses, or icons explicitly adopted by the machinery of state, like St George. We must admire the fact that they are not insecure in their own identity.

It is precisely the adoption of outside influences into a country or state, and their contribution to its flavour, that make that culture unique and give it a powerful magnetism. The way Muslim civilisations embraced the cultures they came into contact with offers an example.

It must be difficult to be a Muslim this week after the tragic events of the Boston Marathon and the suspicion cast by right-wing commentators on Muslims. Meanwhile, in Myanmar, Rohingya Muslims continue to be killed. Figures of peace who are part of the majority, like Aung Sang Suu Kyi, are mealy mouthed about the atrocities rather than clearly condemning the massacres of the minority.

Muslim nations too have responsibilities to care for their minorities. Egypt must work to ensure its Coptic Christian minority is given its due place in the new national structures. In Pakistan and Bangladesh, to name just two other troubled states, minority Hindus, Christians and Buddhists must be protected and embraced.

When a nation treats its minorities well, and offers them protection, that is the unquestionable mark of a great nation.