Netanyahu: The ‘Mr Wrong’ of the Middle East 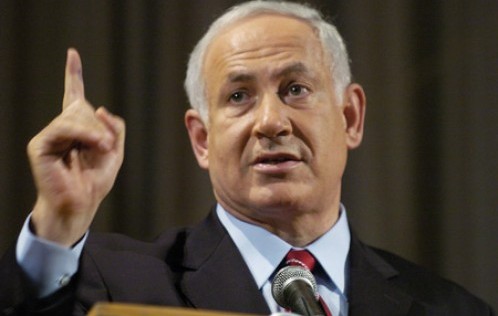 Israeli Prime Minister Binyamin Netanyahu said yesterday that he had been right to oppose the forced resignation of Egyptian President Hosni Mubarak last February and categorized the uprisings in the Arab world as “anti-Western, anti-liberal, anti-Israeli and anti-democratic wave.” He gave the “uncertainty” in the region as yet another excuse for the Likud Party to continue to steal and squat on ever greater portions of the Palestinian West Bank.

Netanyahu’s outburst is of course completely illogical, and also deeply dishonest. When the Arabs were ruled by dictatorships then that was the reason for which Israel could or should steal Palestinian land and keep the Palestinians stateless and devoid of rights. If they have anti-authoritarian grassroots movements demanding parliaments, now that is the reason for the same policies.

Netanyahu seems to be under the illusion that somehow if only the US and Western Europe had tried harder, they could have magically kept Zine El Abedin Ben Ali and Hosni Mubarak in power. But when you’ve got a million people in the center of the capital demanding the dictator leave, and millions gathered in cities and towns throughout the country supporting them in that demand, it really isn’t plausible to imagine that an outside power could retain that hated tyrant. Even if Barack Obama could have pulled off this miracle, it likely wouldn’t have been for very long, and the very attempt would have pushed the Arab masses into radicalism.

Netanyahu’s four adjectives for the movements in Tunisia and Egypt are anti-Western, anti-liberal, anti-Israeli and anti-democratic.

There is another possibility, which is that the movements want democracy and liberalism (in the John Stuart Mill sense of the term, i.e. parliamentary governance and individual rights), but that Netanyahu doesn’t want them to have it because he knows that the scam of Likudnik “Greater Israel” expansion can only be pursued if Israel’s neighbors are ruled by dictators that Israel can threaten or bribe into acquiescence.

Tunisia’s movement has eventuated in the only genuinely democratic election that the country has ever seen. It is true that about 40 percent of the seats were won by the al-Nahda Muslim party, but it has committed to a civil state and could only form a government in coalition with two secular parties. The resulting Tunisian government is far less fundamentalist than Shas and other small religious parties in Israel, which are in Netanyahu’s coalition. Since Tunisia isn’t keeping 4 million people under the boot of foreign military occupation the way Netanyahu is, Tunisia is definitely more democratic than Israel as things now stand, even if its institutions and parties are not as mature.

The charge of “anti-Western” is just propaganda. People aren’t “anti-Western” in principle, they protest particular Western policies. For instance, they mind people like Netanyahu trying to ensure that dictators like Mubarak and Ben Ali remain in power over them. When the “West” did the right thing and supported the Libyan people against the murderous Qaddafi regime, people in Benghazi started waving American, French and British flags. When President Obama finally saw the writing on the wall and gave Mubarak a push, and forbade the Egyptian military to shoot people in the streets, many people in Egypt somewhat revised their view of him. (There were some anti-American posters in Tahrir Square in January and February, but I spent much of July in Tahrir and don’t remember seeing a single anti-American sign). Far from mindlessly condemning “the West,” newly minted Tunisian president Moncef Marzouki has spent a lot of time trying to explain the Arab world to the West. As for revolutionary Egypt, it is still getting $1.2 billion a year in aid from Washington, which doesn’t sound anti-Western to me.

It is not clear what Netanyahu means when he calls the Arab protesters “anti-liberal.” Classical Liberalism is a philosophy of individual rights, parliamentary governance, and liberties. The 20th century Liberal tradition in contrast is about the state ensuring the welfare of the people. The revolutionaries say that they want individual liberties and parliamentary elections. They also want the government to ensure the public welfare. I’d say that many of them are liberals in both senses.

It is true that 30-40% of the electorate favors Muslim religious parties in Tunisia and Egypt (though some do so for non-religious reasons). But religion is not necessarily incompatible with 20th century liberalism (American liberalism has some strong Catholic and Jewish roots). It is true that religious laws imposing morality and punishing victimless crimes contravene the liberal principles of someone like John Stuart Mill. So the Muslim Brotherhood is not classically liberal. But neither was Roman Catholicism classically liberal in the 19th century, and the Haredim who constitute an increasingly large proportion of Israel’s population are likewise hardly classical liberals!

One irony in Netanyahu calling other people “anti-liberal” is that the Likud Party tradition in which he stands (rooted in the “revisionist” Zionism of Zeev Jabotinsky and the terrorist Stern Gang) is highly anti-liberal. The revisionists celebrate their bombing of the King David Hotel in 1946, in which 91 persons, mostly innocents, were killed. Larry Derfner wrote in 2010 that “years ago, when Etzel veterans commemorated the 60th anniversary of the King David bombing, Netanyahu, scion of a proud Revisionist family, was the featured speaker.” (Jerusalem Post, July 29, 2010.) And if anything, some of Netanyahu’s coalition partners, such as Avigdor Lieberman’s largely Russian/Ukrainian Yisrael Beitenu, are even more right wing and authoritarian than Likud.

Netanyahu just shut down a radio station because he did not like its editorial position, the act of an anti-liberal tyrant. One of his media advisers has resigned over the increasing erosion of freedom of speech in Israel. Netanyahu’s majority in the Israeli parliament has also outlawed tools of grassroots organizing such as calling for boycotts. A push is being made to deprive Arabic, the language of over 20% of Israel’s population, from any official status, and Lieberman would like to make large numbers of Israeli citizens stateless. This is “liberal”? Nor is the entire apparatus of Israel’s military occupation of the West Bank and military blockade of Gaza “liberal.”

As for the Arab protesters, it would be possible for the Tunisian and Egyptian activists to be pro-democratic, but to have a strong critique of Western imperialism and of the Likud Party’s oppression of the Palestinians. A critique of Israeli policy toward Palestinians in the West Bank and Gaza is not the same thing as being “anti-Israel” (except in the Likud Party’s illiberal worldview). It is also logically possible for some of the protesters to be pro-democracy without being classically liberal.

In any case, the exact mix of political practices and philosophies that emerges in the Arab world in the aftermath to the 2011 movements is irrelevant to Netanyahu’s vast land thefts in the West Bank, which are immoral, inhumane and illegal according to the Geneva Convention of 1949 on the treatment of peoples in militarily occupied territories.

Netanyahu is so blinkered that he thinks his completely unrealistic stance that the West should have tried to keep the dictator Hosni Mubarak in power has been proved right. He is so captive of illogic that he cannot see the hypocrisy of claiming that the Tunisian democrats are “anti-liberal” while himself advocating continued dictatorship! And Netanyahu is so dedicated to the Greater Israel project that he cannot see that it is what generates “anti-Israel” sentiments among his neighbors. It is sort as if a con man who was stealing your brother’s property should call you a despot and a bigot for objecting to his theft.

The one thing Netanyahu has right is that public opinion is going to start mattering in the Arab world in a new way, and that opinion is not favorable to Likud Party policies. As usual, Netanyahu is drawing a completely wrong conclusion from this reality — that he should accelerate and trumpet the very land theft to which Arab public opinion objects. Sooner or later the Likud is going to get its comeuppance for blind arrogance. I fear a lot of innocents are going to be harmed as a result.

One Response to Netanyahu: The ‘Mr Wrong’ of the Middle East