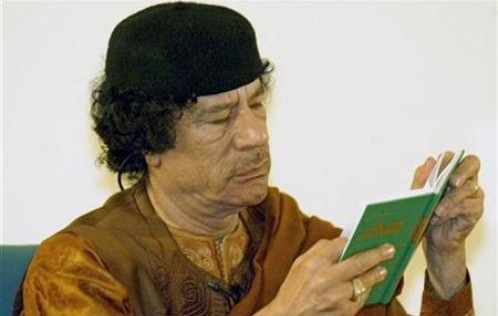 According to a report by the Toronto Star’s Mitch Potter (@MPWrites), a “book unbanning” ceremony was held yesterday in Tripoli. The ceremony took place at a royal palace that was converted into a Qaddafi-era library.

He wrote in The Star that, “the VIP crowd made its way to the top for [floor] of the palace, heaped with table upon table of books deemed unreadable during Moammar Gadhafi’s 42-year rule.”

The books on display apparently included those about Saddam Hussein, Israel, Hezbollah, and sex, as well as novels by Salman Rushdie (or so I believe; in the article it’s “Salmon Rushdie”).

Even better: Many of the titles that were being held by the Libyan censorship office will be on sale for the next four days. According to Potter, the Society For New Libyan Horizons and the Tripoli Revolutionary Brigade are sponsoring a book fair to sell the texts.

At the “un-banning” ceremony, Dr. Salah Abdullah al-Aghab, an archaeologist, reportedly said, “Here in this historic place, knowledge was banned. The previous regime called it a national library, but it was more like an indoctrination centre to control our thinking.”

And Said Abdullah al-Harati, of the Tripoli Revolutionary Brigade, added, “Our struggle is not just military, but intellectual. Gadhafi fought science, he fought knowledge. And so we are now looking forward to a state founded on the knowledge he wanted to deny.”

Meanwhile, Tunisia has taken several steps forward in un-banning books, although Internet censorship remains a contested issue. And in Egypt, we have unfortunately yet to see a real change in censorship policies. (I would love a book fair for titles being held in the raqaba office!) If anything, the military council is trying to get tougher on various popular media, although a number of bloggers, TV hosts, and print journalists are fighting back.