Hitler, Friend of the Arabs? Twisted History in the Region 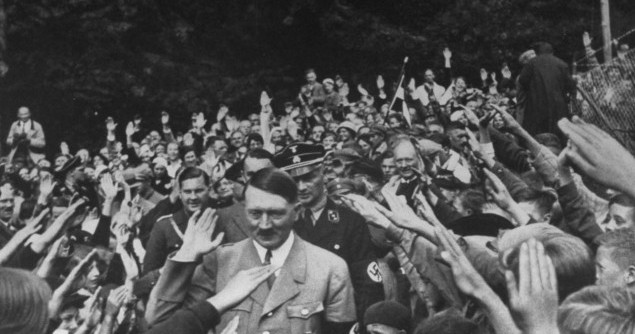 Three days ago was the 80th anniversary of Adolf Hitler’s swearing in as Chancellor of Germany.

Today, Hitler and the evil he wreaked is no less potent a reference for those who wish to make a political point than ever.

In the UK, the veteran cartoonist Gerald Scarfe has been censured and censored for a cartoon in the UK’s Sunday Times showing Binyamin Netanyahu building a wall with the corpses of Palestinians as mortar. A Liberal Democrat Member of Parliament caused a furore by comparing the actions of Israel against Palestinians with Nazi persecution. And David Irving, the historian who served jail time in Austria for denying the Holocaust was quoted the other day as saying that “no more than 50,000″ people died in the Majdanek concentration camp.

Here in the Middle East, a long-standing school of thought about Nazism that began after the end of the Second World War appears to be alive and well. It holds that Hitler was the friend of the Arabs who failed in not doing a sufficiently thorough job in exterminating World Jewry. As a result, according to one branch of the narrative, schoolchildren in the Gulf states between the fifties and seventies were taught a highly anti-Semitic version of history by generations of Egyptian teachers – members of the Muslim Brotherhood – who were hired in the absence of local educators. One student who fell under the influence of such a  teacher was Osama Bin Laden.

In the current ascendancy of the Egyptian Muslim Brotherhood, holocaust denial appears to have successfully survived the Mubarak years. A political blog that I respect and follow regularly, The Arabist,  calls attention to a recent statement by Fathi Shihab Eddin, the Chairman of the parliamentary Culture, Tourism and Information Committee. Mr Eddin in his original article claims that the 6 million Jews supposed to have perished in the Holocaust actually ended up in the US! The title of the article  – Embarrassing MB Statement about Jews Part 235 – implies that this is the latest of many such rants.

One historical fact few would dispute is that Haj Amin Husseini, the Mufti of Jerusalem – the spiritual leader of the Muslim community in Palestine, was virulently anti -Semitic. He tried to make common cause with Hitler, lived in Berlin for much of World War 2 and worked tirelessly to enlist the support of the Third Reich in his attempts to combat the Zionist movement in what was then the British mandate of Palestine.

I was somewhat surprised at this assertion. So I did a little research. I discovered that the history of the Second World War, Holocaust and all, was fully covered in the government-approved curriculum for the private schools. Why the curriculum in the state system should be different is still a mystery to me. A few months later, as I was passing through the airport in that country, I noticed in the bookstore, in a prominent position, an English translation of Mein Kampf! Confusing to say the least.

I thought that the days were over when Arab states affected to ignore inconvenient political realities. Thirty years ago, when I first came to the Middle East, Israel was regularly referred to in sections of the Arab media as “the Zionist entity”, for example. Maps of the region would not show Israel, as if through the pretence that it did not exist, the notional enemy would go away.

Yet the rhetoric, the denial and the manipulation of the Nazi-Jewish narrative continues in many quarters. It needs to stop. Individuals like Mr Eddin and other representatives of supposedly responsible nation states should stop making themselves look ridiculous with wild assertions that are easily refuted.

They should also refrain from comparing the behaviour of Israel with that of the Nazis. Doing so is insensitive and hurtful to the human beings whose families suffered in the Holocaust, whether or not even if they support Israel’s policy over Palestine. Also, the comparison is disproportionate, asymmetric and ultimately unnecessary. There are many other historical and well-documented examples of oppression that would equally bear comparison with current events in Palestine.

For their part, supporters of Israel need to accept that to criticise Israel is not necessarily to be anti-Semitic. They also need to recognise that those who speak of Nazism and the personal qualities and achievements that made Nazism possible are not necessarily admirers of fascism any more than those who recognise the leadership qualities of Josef Stalin endorse the atrocities he perpetrated.

Yes, I know I’m making a point that has been repeated again and again in many circles, not least among those who are worried about the disproportionate power of the Jewish lobby in the USA. But it should continue to be repeated until sanity and reason prevail in the relationship between Israel and its neighbours.

The Holocaust is but one contentious historical event. Whether we like it or not, there is no objective standard for the teaching of history. Individual nations – especially the “liberal democracies” of the West – have increasingly confronted their murky pasts in the historical narrative taught in schools. In the US you will learn about the slave trade and the marginalisation of American Indians. The UK’s colonial past is no longer varnished into a glorious era of empire. Germany does not shirk from describing the horrors of the Nazi period. And Australia recognises the injustices done to the aboriginal population.

Yet other countries continue to provide redacted version of their histories – Japan and Argentina, for example. I say redacted because often it is not a matter of distortion of known facts – more about the omission of inconvenient ones, such as the extermination of Argentina’s native population by the European settlers in the 19th century. The Japanese find it excruciatingly hard to come to terms with their activities in Korea and China in the 1930s. And now the Russian state under Putin is slowly rehabilitating Stalin’s reputation.

Here in the Middle East, historical narrative is often written in such a way as to emphasise the legitimacy of the ruling elites, particularly those with a limited provenance. Nothing new in that. The Roman Emperors were happy to boast of their ancient and sometimes divine antecedents. Virgil’s Aeneid traces Augustus’s ancestry back to the goddess Venus through his great- uncle and adoptive father Julius Caesar.

Popular narratives in Israel intermesh the secular with the religious to make a case for the Zionist vision of Greater Israel. No doubt the Islamists of Mali would dearly love to erase that country’s history as a centre of Sufi scholarship, just as the Taliban sought to deny Afghanistan’s Buddhist antecedents by their vandalism at Bamyan.

The more insecure the nation, it seems, the more strident and selective the history.

Fortunately alternative narratives do find a way to survive the efforts of the censors. People in the Middle East will find them every day on satellite TV. Channels with a variety of agendas regularly infuriate the state information controllers with their versions of history and current affairs.

The other day I was deeply moved by a documentary on the BBC World Service about the oral history that was collected in the Warsaw Ghetto before the extermination of its occupants by the Nazis. Sensing what was about to befall their community, a group of activists transcribed thousands of spoken accounts of life before the holocaust and the persecution that led Jews all around Poland to the Ghetto. They buried the documents in three caches, two of which were discovered after the war. As they hoped, the memory of their people was not destroyed.

For all the ethnic and sectarian tensions taking place in troubled areas of the Middle East – in some cases amounting to outright ethnic cleansing and sectarian oppression – the tradition of oral history will survive, no doubt to emerge and challenge the official view espoused by present regimes and their educators. Today there is no need for documents hidden in milk pails in the bombed out gardens of the Warsaw Ghetto. In the age of the Internet, no government or religious establishment can easily shelter behind its authorised narrative. Where there is a will, people will usually find a way to tell a different story.

And then it’s up to you, and not the history makers, to decide between the versions.