Syria: The Argument Against intervention 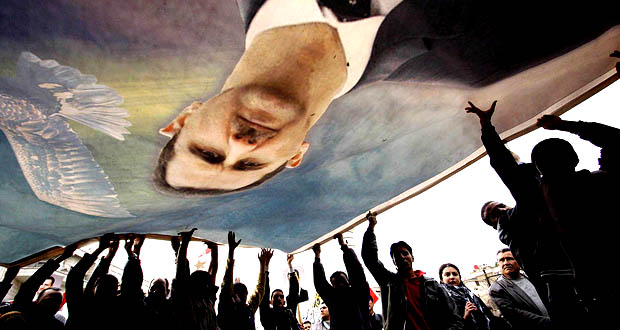 Thirty years ago this February Syrian President Hafez Al-Assad, the father of current President Bashar Al Assad, launched a brutal, targeted and effective crack-down on mounting opposition in the town of Hama. Estimates of the death toll typically range from 15000 to 40000 in the Army-led offensive.

Like father, like son: Bashar Al Assad seems to be similarly minded with attacks from the Syrian Army increasing in severity in recent months. Unsurprisingly, this escalation has led people to ever more vociferously decry that something must be done, particularly after Russian and Chinese vetoes of the United Nations Security Council motion to condemn Assad.

While such sentiments are noble if not just and necessary, working out exactly what must be done is a fiendishly difficult thing to do and anyone who says that they have a solution is likely grossly underestimating the domestic and international complexities involved in Syria.

Intervention by analogy will not work
Some may look to Libya and the international intervention there as an example of what to do, for there are generic similarities: both are Arab countries with popular rebellions and have bloodthirsty despots for leaders. But the fact is that these situations are startlingly different and must be treated as such.

Libya is one of the least populated countries on earth, with three times as few inhabitants as Syria, but in a country nine times larger. Practically, this meant that there were vast swathes of land into which Libyans could retreat, organise themselves and in which foreign countries could drop weapons and deploy military trainers to help the ‘rebels’. This is just not the case in Syria where there are, thus far, no large areas of the country remotely under ‘rebel’ control.

Also, the Syrian Army appears to be far from buckling as completely and as quickly as their Libyan counterparts. And key cities including Aleppo on the northern border from where a foreign intervention would be easiest to organise, are still resolutely in Assad hands.

Sending weapons?
After the Russian and Chinese veto, the worsening bloodshed and the ineffectualness of the Arab League, it seems likely that now money and arms will be sent to the Free Syrian Army. Indeed, trainers may find their way into Syria too. Yet, given the issues noted above, the effectiveness of these measures will be questionable. Not only are there concerns that the weapons may be intercepted by the regular army, thus augmenting their supplies, but if there is the appearance that the ‘rebel’ side is being armed externally then Russia is likely – having made their reprehensible position perfectly clear – to supply Assad’s army even more.

Russia would not be Syria’s only benefactor. Iran has a crucial stake in Assad’s continuing rule as this affords them and their proxies (i.e., Hezbollah) room for operation, which may be denied them in any future Syrian configuration. Iran will not limit its support to merely weapons given that reports indicate that Kassam Salimani the commander of the Quds Force – the Iranian Revolutionary Guard special forces unit – is now in Syria aiding Assad’s army.[1] Whether this indicates that Syria is preparing for an asymmetric, guerrilla response or civil war is impossible to say, but Iran’s dedication to Assad’s continued survival cannot be questioned.

In short, history and common sense indicates that internationalising a civil war, with Russia and Iran supplying one side and Western states and Gulf States supplying the other, is a recipe for nothing other than a deep protraction of the conflict and increased regional instability.

Lack of planning
No plans yet conceived have any understanding of what post-Assad Syria might resemble. What would happen to the currently empowered Alawite minority of around one in ten Syrians or other Shia minorities? Undoubtedly the attacks need to be stopped but arresting the massacre of one tranche of the population to be replaced by attacks on another is not a solution. And is anyone in any doubt as to the vicious retribution that would be meted out?

It would need a savant to work out the geopolitical implications of a post-Assad Syria. What about a resurgent Sunni nationalism (likely to be used as a force to corral people together) and the Golan Heights or Lebanon? What would happen to Hezbollah and what would Iran do to safeguard this group which Tehran sees as intrinsically important to its asymmetric defence? In terms of wider significance, how would an even more enraged Russia, potentially embarrassed, beaten and shorn of its key Mediterranean Sea port, react? Surely not well.

Certainly no one can ever have all the answers to these frankly impossible questions, but equally some kind of idea is required for a post-Assad Syria before states scatter the Syrian countryside with weapons hoping – for that is all it is a lot of the time – that they fall into the right hands.

Alternatives?
Removing Russian, Chinese and Syrian Ambassadors from Arab states would be a superbly symbolic move, showing that amoral policies have real consequences, but would likely to have little impact. Instead, if Arab States truly feel as anguished as they claim, then they can, as they have before, club together and use energy supplies as a weapon.

First, it could be used as a punishment for states that continue to support or trade with Syria. While Middle Eastern states will be loath to interrupt China’s imports given its status as a key long-term customer and rising power, this weapon could be used more effectively closer to home to ratchet up pressure on Syria’s regional trading partners.

Second, at the same time, discounted energy could be used to coax compliance with emerging international initiatives. Turkey imports 90 per cent of its oil and similar amounts of gas mostly from Russia and Iran. Similarly Jordan imports 96 per cent of its energy demands with an eye to importing yet more in the near future. While it will not persuade states to act against their long term interest, undercutting existing prices for a set amount of time could encourage these countries to bandwagon and add to Syria’s isolation where possible, while also tangentially impacting upon Russia and Iran.

Such ploys, while weakening the Syrian regime perhaps significantly, would also show the world that Arab states are serious about what they say and would allow the regional community to come together to plan for a putative post-Assad Syria.

On the darker side of diplomacy, there may be room to make a grand bargain involving the protagonists. Syria, Russia and Iran want to maintain the status quo, ideally (though clearly not exclusively) with less killing of civilians. Western states want to stop the killing, which is just too egregious to ignore; any more Machiavellian goals to remove Assad are likely to be trumped by profound fears of the post-Assad unknown. Arab States like Saudi Arabia and Qatar feel personally betrayed by Bashar and feel that he must go to stop the killing. It is debatable whether Saudi Arabia, for example, wishes to get rid of Assad in order to break the Shia Crescent, empowering regional Sunnis and deal a blow to Iran. But Saudi Arabia, typically a state that doggedly follows a conservative, cautious agenda, is also likely to be highly concerned about the post-Assad fallout.

Russia’s involvement may increase in the near future as it seeks to guarantee a stake in the key future decisions in Syria. If not remotely for humanitarian reasons, Russia may push the Syrian regime to reel in its brutality. Continued violence, from the Russian perspective, could worsen their strategic outlook in Syria by drawing on such vociferous criticism and subsequent support for the Free Syrian Army.

It is possible, therefore, that Iran (for similar reasons) and Russia could be persuaded to significantly pressure the Assad regime in return for some understandings among international actors that the broad status quo in Syria be maintained.

Certainly, there are numerous concerns and problems to overcome in such a plan, not least of which is whether the Syrian authorities could practically find a way to deal with the burgeoning revolt more peacefully. Whether a suitable accommodation could be reached between Arab States and the Syrian-Russian-Iranian axis, balancing the apparent need to see the end of Assad the ability to mollify such demands sufficiently, is also questionable. But it must not be forgotten that it is the status quo, not Assad himself, that is the key for many of these actors.

This difficult and wholly unedifying policy may be the least worst option: it may prompt a hiatus in the killing and prevent a range of states littering Syria with weapons and money, adding arms and ammunition to an escalating, combustible situation.

Originally published on RUSI.org. For the other side of the coin from @the_steevo_uk see RUSI.

One Response to Syria: The Argument Against intervention