The Palestine Papers and the Dilemma of Peace Talks 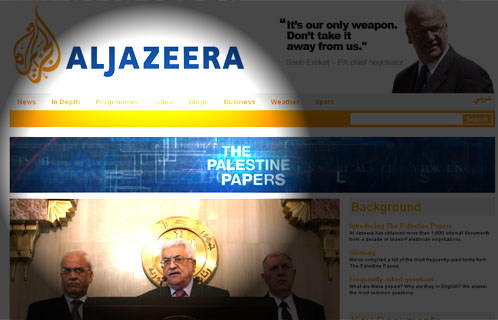 Much will be said and written about the so-called Palestine Papers, a cache of 1600 mostly confidential documents, emails, records of secret meetings and peace proposals, which were published jointly this week by the Qatar based Al Jazeera network and London’s The Guardian newspaper. The leak is the biggest of its kind in the decades-old history of Arab-Israeli conflict, but especially important because it gives an inside view of the beleaguered peace process during the last ten years.

There is no dispute over the authenticity of the documents, which include minutes of meetings between Palestinian and Israeli negotiators and exchanges between PNA and US officials. Instead the heated reaction to their publication by PNA officials is over the motives and the intentions behind such move. One such official, Yasser Abed Rabbo, accused Al Jazeera of attempting to discredit the PNA just as it tried to discredit the late Yasser Arafat in the past. He called the leak “a propaganda game through the media in order to brainwash Palestinian citizens.”

Palestinian President Mahmoud Abbas said the PNA had no secrets and it regularly briefs Arab leaders of every development in the peace negotiations. The Israeli reaction ranged from refusal to comment on the matter to noting that the documents revealed Palestinian points of view and not those of Israel. Foreign Minister Avigdor Lieberman said the leaks prove that only a long-term interim agreement can work.

Regardless, the documents show a steady deterioration in Palestinian demands and positions, even though publicly the PNA continued to argue that it stood firm on issues such as settlements, Jerusalem and refugees. Chief Palestinian negotiator, Saeb Erekat, accepted in one of the documents to concede all East Jerusalem settlements, except for one, in addition to the Jewish Quarter and part of the Armenian Quarter in the Old City, leaving the fate of Al Aqsa Mosque to be decided later.

The documents include maps, presented by both former Israeli premier Ehud Olmert and the Palestinians that show details of lands to be exchanged in both the West Bank and Gaza Strip. Many observers believe the Palestinian concessions give in to Israeli demands while allowing the Israelis to commit to nothing. This erosion in the Palestinian position has never been exposed before. It proves that the Palestinian leadership is willing to award the Israelis concessions that go beyond what most Palestinians, and Arabs, consider as red lines, such as East Jerusalem and Al Aqsa Mosque.

Officially President Abbas has always claimed that he will not accept a deal that does not meet the criteria set by his predecessor, President Arafat. But now we find out that until the fall of the Olmert government the PNA was close to finalizing a deal on Jerusalem that would have recognized Israeli settlements encircling the city while giving Israel additional land in Arab neighborhoods. As to Mr Erekat’s position on Al Aqsa Mosque it not only contravenes international laws and resolutions but all Arab and Islamic decrees on the issue.

The Guardian said that further release of documents in the coming few days will prove, among other things, the scale of confidential concessions offered by Palestinian negotiators, including on the highly sensitive issue of the right of return of Palestinian refugees, the intimate level of covert co-operation between Israeli security forces and the Palestinian Authority, the central role of British intelligence in drawing up a secret plan to crush Hamas in the Palestinian territories.

Reacting to these and other revelations Hamas said the documents prove that the PNA was conspiring to liquidate the Palestinian cause. But more importantly it said that the scale of concessions underline the fact that negotiators have no authorization from the Palestinian people.

The documents also underline an important fact; that the Palestinian leadership today has one goal in mind; to reach a deal with Israel at any price. This is both tragic and despairing. It is tragic because as things stand now the peace process is dead and the current Israeli government’s position does not even meet the minimum of Palestinian demands. So those “historic” concessions on Jerusalem were made for free and without an outcome. It is also despairing because the credibility of the PNA has by now been shattered, leaving the Palestinian people wondering if they can ever regain trust in their leaders.

On the other hand, what the documents reveal about Palestinian concession will also have dire consequences on US and international positions on issues like settlements and the right of return for refugees. If the Palestinian leadership accepts the principle of recognizing illegal settlements in East Jerusalem why should Washington and the rest of the international community take an opposing position?

No Palestinian negotiator has the right to give away occupied territories or decide the fate of millions of refugees, especially if he or she does not have a clear mandate from the people. It is shocking that the Palestinian leadership would commit such a crime against its own people. For years now all Palestinian democratic institutions have been disabled, leaving historic decisions in the hands of one man, President Abbas, whose term has already expired.

The Palestinian leadership owes its people a public apology over its conduct in the past decade, but it also must come out clean by addressing issues of legitimacy and representation. Hoping to get a deal from Israel has proved to be a futile chase of a mirage in the desert. After almost 20 years of negotiations the Palestinians have nothing. They remain under occupation and their land is quickly disappearing. The decent thing to do now is for President Abbas is to step down and allow free elections to take place to produce a new leadership.