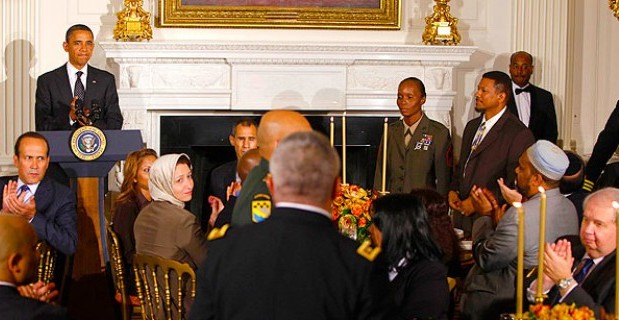 In April, as it does every year, the Arab American Institute (AAI) hosted the “Kahlil Gibran Spirit of Humanity” awards in Washington, D.C. The institute, an organization that promotes Arab-American participation in political life, honored several groups, including the Southern Poverty Law Center “for its tireless efforts to foster a society that respects all its members.”

The news about Holder first leaked onto the Internet as the awards dinner approached, and further details were confirmed by a source close to the Arab American Institute. AAI thought “it would be kind of foolish to just sit there and have them check off the box that they’ve talked to our community,” the source said.

AAI, which works with the administration on a number of levels, has been publicly quiet about the incident.

Though the Obama campaign was squeamish about Islam due to right-wing smears–campaign volunteers once removed Muslim women from sitting behind the candidate’s podium–the overwhelming majority of American Muslims voted for Obama in 2008.

“American Muslims were very encouraged at the beginning of the Obama administration. There was a lot of nice rhetoric,” said Ibrahim Hooper, a spokesperson for the Council on American Islamic Relations, in an interview.

Recent polls show that Muslim support for Obama remains high, and Mitt Romney’s courting of the Islamophobic wing of the GOP means Muslim affiliation with the Democratic Party will likely remain through the 2012 election. It remains to be seen, though, whether that support will be turned into actual votes.

That question could be crucial to the prospects for Obama’s re-election. A new study on American Muslim political participation notes that in Florida, the Muslim “electorate is large enough to swing the vote to whichever party receives most of its votes.” Michigan, with its large Muslim population, was another state the study identified that could be won over with Muslim votes.

But the Obama administration has paid little attention to American Muslims. In fact, President Obama has not set foot in a mosque in the US since he was elected. This is in sharp contrast to the extensive outreach to the Jewish community.

Adding to Muslim-American and Arab-American anger at the Obama administration has been the continuation and escalation of wars in the Middle East, as well as passage of the National Defense Authorization Act. But perhaps the issue that has most hit home is the administration’s response to anti-Muslim trainings and programs in law enforcement.

The administration’s recent bungled response to the NYPD spying controversy is a case in point. An Associated Press investigation has revealed the police department’s potentially illegal program of surveillance on Muslims in the Northeast, and many Muslim activists and community leaders have been organizing since then to put a stop to the program.

When John Brennan, Obama’s chief counterterror adviser and a former Bush administration official, met with NYPD chief Ray Kelly in New York two weeks ago, he said, “My conversations with Commissioner Kelly indicate he’s done everything according to the law.” Brennan repeatedly said he had “full confidence” in the NYPD.

As an Associated Press report put it, the comments represented “a White House stamp of approval of the NYPD’s tactics.” The Muslim Public Affairs Council (MPAC) expressed “deep concern” over Brennan’s comments.

“Brennan’s statements could undermine the preliminary review the Department of Justice is considering to determine if there were any unlawful practices that led to spying on Muslim Americans,” an MPAC statement read. MPAC also had a message for the Obama administration: “In a letter to the White House, MPAC made it clear that unless there are steps taken to further clarify the statements this could harm our shared agenda of community-partnership approaches.”

The administration quickly responded with a statement denying that Brennan approved of the NYPD program, and set up a meeting with Brennan and a handful of Muslim community leaders. But even the meeting was panned by critics, who said it only included four people, was organized hastily and did not address the Muslim community’s questions about the administration’s position on the NYPD program.

“It’s clear that this episode will weigh heavily on the community’s mind heading into the November elections,” Omar Tewfik, a spokesman for AAI, recently wrote, referring to Brennan’s comments. “Caught between bigoted policies and confusing or disingenuous outreach, the situation of Arab Americans and American Muslims in the lead-up to this election looks quite grim.”