The Spirit of Freedom that Drives Gaza’s Long-Distance Runner 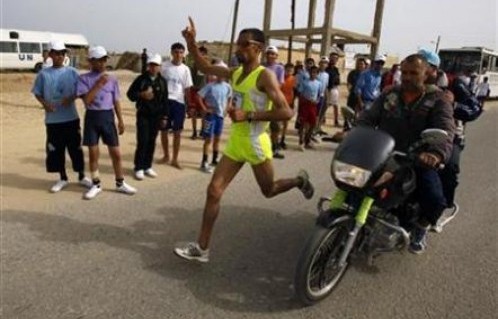 Nader al-Masri is an inspiration. The 31-year-old Gaza athlete seems completely oblivious to challenges that would seem insurmountable to most. On May 5th, he led a small pack of nine runners into the finish line of Gaza’s first marathon. Behind them, 1,300 children ran various distances.

Many of the children who participated in the UN-sponsored marathon probably pointed and cheered at Nader as he sped by them. Some might even have tried to momentarily hustle to remain at equal footing with Palestine’s favorite runner. Despite the scorching heat and numerous obstacles, Nader finished in 2 hours, 47 minutes and 47 seconds, falling short of his goal by over 17 minutes.

Nader has run prestigious events outside Gaza. He took part in the 5,000 meters race at the Beijing Olympics, and is currently undertaking vigorous training in preparation for the 2012 London Games. I am certain that his partaking in the London event will be used as an opportunity to celebrate Gaza and Palestine.

According to the Associated Press, Nader declared, ‘It is a day of joy,’ as he reached the finish line in Rafah, near the Gaza-Egypt border. ‘This is a very happy day for me because it is the first-ever marathon in Gaza.’ The Rarah border has been closed for a large part of the last five years, making the Israeli siege and protracted war on Gaza complete, as well as unbearable. The post-revolution government in Egypt, however, is planning to divest from any further political participation in the Israeli siege on Gaza. Egypt’s new Foreign Minister Nabil Al-‘Arabi has promised to open – and keep open – the border point.

Nader’s last name, ‘al-Masri’, means ‘the Egyptian’. Many Palestinians also carry the same name. The bond between the two countries is remarkable and historic, and it long preceded former Egyptian President Hosni Mubarak’s decision to become ‘moderate’ and effectively suffocate the already confined population of the Gaza Strip.

The race started from Gaza’s most northern point, Beit Hanoun. The small town was previously center stage in Israel’s so-called Operation Cast lead. In a period of three weeks between December 2008 and January 2009, over 1,400 Palestinians were killed and 5,000 more were wounded, according to UN and other international reports. Israel argued that it had the right, if not duty, to act as it did.

Nader is from Beit Hanoun. Considering the very high ratio of Israel’s victims that come from this small town, one can imagine that Nader has lost neighbors, friends, and family members. Many in Beit Hanoun, like thousands of other Palestinians in Gaza, will carry the scars of Israel’s war to the end. Many will not be able to walk for the rest of their lives. But Nader is still running.

The war on Gaza took place merely four months after Nader’s participation in the Beijing Olympics in August 2008. I had, at the time, written about him and three other Palestinian athletes who took part in the games:

‘When four Palestinian athletes marched with the Palestinian flag into the Olympic Games in Beijing it was a statement, a declaration of sorts, that Palestinians insist on their right to exist on equal footing with the rest of the world, to raise their flag without fear and wear their country’s name spelled out the way it should be, not as a Palestinian Authority but as Palestine. The 1.5 million Palestinians living in besieged Gaza must have savored that moment more than anyone else. One from amongst them, Nader Al-Masri, had a big smile on his face as he marched, nervously but proudly. Gaza lived a moment of freedom that day, one that even Israel couldn’t take away.’

Since then, much has plighted Gaza, Cast Lead notwithstanding. The Gaza population has grown in size to 1.6 million. Thousands of international peace activists have marched to Gaza, crossing continents and braving high seas to stand in solidarity with the besieged population. Some were brutally murdered. Nine Turkish activists died abroad the Mavi Marmara on May 31, 2010, at the hands of Israeli soldiers in international waters. On May 5, 2011, nine athletes finished the first Gaza Marathon, including a few internationals. Solidarity is a unifying value in Gaza.

A marathon is an approximately 42 kilometers long (26.2 miles). The length of Gaza in its entirety is 41 kilometers. The difference must have been managed somehow, through side roads or other means. Israeli army watchtowers dot the Gaza-Israel border. Israel removed its illegal colonies from Gaza in 2005, but remained in complete control over the Strip, gunning people down inside the big cage whenever any of its inhabitants resembled a ‘security threat’. Luckily the children of the Gaza Marathon escaped such classification.

As a result of the Gaza Marathon, UN Relief and Works Agency for Palestine Refugees in the Near East (UNRWA) raised over a million dollars, thanks to the generosity of many people. The amount is enough for UNRWA to deliver on its promise to 250,000 Gaza children to attend summer camps.

Marathons carry different meanings and values, and each participant has his own unique reasons for participating. In Gaza, it was the spirit of freedom that compelled Nader to run, and to keep on running.

‘When given the opportunity, the children of Gaza can be the best in the world,’ UNRWA media advisor Adnan Abu Hassna said. They can also inspire us all – not for the two Guinness Records they broke in recent years – but because they are determined to hope under the most terrible and challenging of circumstances.

As for Nader, this Gaza man will simply keep running as long as his legs will carry him. Gazans are known for being stubborn, and perseverance is our gift.