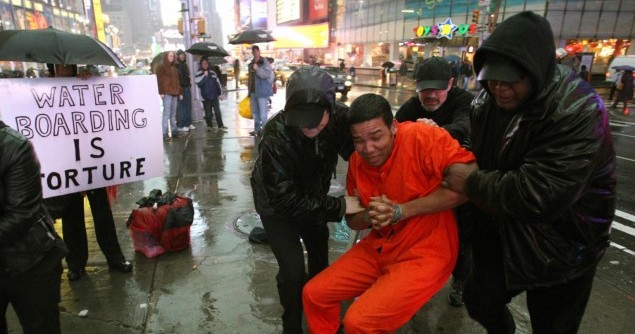 On January 11th, 11 years to the day after the Bush administration opened its notorious prison at Guantanamo Bay, Cuba, Zero Dark Thirty, Kathryn Bigelow’s deeply flawed movie about the hunt for Osama bin Laden, opens nationwide. The filmmakers and distributors are evidently ignorant of the significance of the date — a perfect indication of the carelessness and thoughtlessness of the film, which will unfortunately substitute for actual history in the minds of many Americans.

The sad fact is that Zero Dark Thirty could have been written by the tight circle of national security advisors who counseled President George W. Bush to create the post-9/11 policies that led to Guantanamo, the global network of borrowed “black sites” that added up to an offshore universe of injustice, and the grim torture practices — euphemistically known as “enhanced interrogation techniques” — that went with them.  It’s also a film that those in the Obama administration who have championed non-accountability for such shameful policies could and (evidently did) get behind. It might as well be called Back to the Future, Part IV, for the film, like the country it speaks to, seems stuck forever in that time warp momentof revenge and hubris that swept the country just after 9/11.

As its core, Bigelow’s film makes the bald-faced assertion that torture did help the United States track down the perpetrator of 9/11. Zero Dark Thirty — for anyone who doesn’t know by now — is the story of Maya (Jessica Chastain), a young CIA agent who believes that information from a detainee named Ammar will lead to bin Laden. After weeks, maybe months of torture, he does indeed provide a key bit of information that leads to another piece of information that leads… well, you get the idea. Eventually, the name of bin Laden’s courier is revealed. From the first mention of his name, Maya dedicates herself to finding him, and he finally leads the CIA to the compound where bin Laden is hiding.  Of course, you know how it all ends.

However compelling the heroine’s determination to find bin Laden may be, the fact is that Bigelow has bought in, hook, line, and sinker, to the ethos of the Bush administration and its apologists. It’s as if she had followed an old government memo and decided to offer in fictional form step-by-step instructions for the creation, implementation, and selling of Bush-era torture and detention policies.

Here, then, are the seven steps that bring back the Bush administration and should help Americans learn how to love torture, Bigelow-style.

First, Rouse Fear. From its opening scene, Zero Dark Thirty equates our post-9/11 fears with the need for torture. The movie begins in darkness with the actual heartbreaking cries and screams for help of people trapped inside the towers of the World Trade Center: “I’m going to die, aren’t I?… It’s so hot. I’m burning up…” a female voice cries out. As those voices fade, the black screen yields to a full view of Ammar being roughed up by men in black ski masks and then strung up, arms wide apart.

The sounds of torture replace the desperate pleas of the victims. “Is he ever getting out?” Maya asks. “Never,” her close CIA associate Dan (Jason Clarke) answers.  These are meant to be words of reassurance in response to the horrors of 9/11. Bigelow’s first step, then, is to echo former Vice-President Dick Cheney’s mantra from that now-distant moment in which he claimed the nation needed to go to “the dark side.”  That was part of his impassioned demand that, given the immense threat posed by al-Qaeda, going beyond the law was the only way to seek retribution and security.