Of Jesus, Smith and Elvis: The Prophet Issue 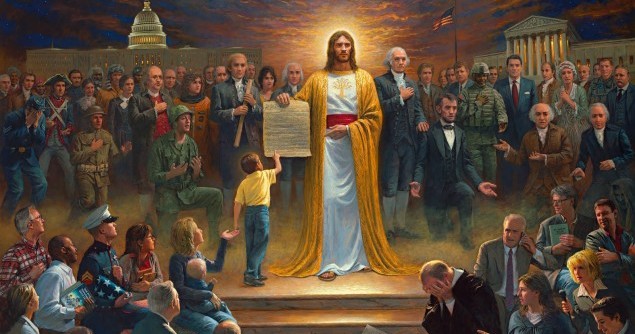 The current cover of about-to-be-print-defunct Newsweek asks a question that could be seen as an old (and oh so tired) joke:

Who’s there?
Jesus.
Jesus who?
Jesus who? After 2000 years you still don’t know who Jesus was?

Perhaps Newsweek is reduced to the digital because it took so long to follow up on Time Magazine’s 1966 cover that asked “Is God Dead?” Both are questions that beg further questions. For Time, which God? For Newsweek, which Jesus? For that matter, it could also be asked which Moses, which Muhammad, which Buddha, which Krishna, which Ishtar, which Baal, which Zeus, which Napoleon, which Joseph Smith and which Elvis? In all but the last three choices above, no historian can ever answer the question, and even Napoleon is philosophically iffy.

Since this is the Christmas season that is consuming our time, let’s start with Jesus. Do you want the Jesus who is mortal or the one born of a virgin and equal to eternal deity? Be careful how you choose for you could end up (and it would be your end after the middle of the 4th century) being an Arian heretic rather than accepting the alternative of homoousious (a word worth looking up if only because it has a double o in the middle). Do you want the babe away in a manger while angels sang to shepherds and wise guys followed a star to Bethlehem? Then even the current Pope has his doubts. Do you want Jesus of the Gospels, who thought it was easier for a camel to go through the eye of a needle than for a rich man to get into heaven and preferred the wisdom of children to the theologians of his day? Then think twice about applying for funding from the for-profit Andrew Carnegie’s trying-philanthropically-to-be-like-the-prophet Carnegie Foundation.

Do you want the Jesus who died for your sins so you could go on a crusade to the Holy Land and kill the infidels who had taken over Jerusalem? Then Pope Urban II assures you that you will go to straight to heaven no matter how much sin you have committed. As he noted in 1095 anno domini:

All who die by the way, whether by land or by sea, or in battle against the pagans, shall have immediate remission of sins. This I grant them through the power of God with which I am invested. O what a disgrace if such a despised and base race, which worships demons, should conquer a people which has the faith of omnipotent God and is made glorious with the name of Christ! With what reproaches will the Lord overwhelm us if you do not aid those who, with us, profess the Christian religion! Let those who have been accustomed unjustly to wage private warfare against the faithful now go against the infidels and end with victory this war which should have been begun long ago. Let those who for a long time, have been robbers, now become knights. Let those who have been fighting against their brothers and relatives now fight in a proper way against the barbarians. Let those who have been serving as mercenaries for small pay now obtain the eternal reward. Let those who have been wearing themselves out in both body and soul now work for a double honor.

Take note, O Tea Party of the Bible Belt, of a tried and true (cross my heart and hope to die) way of reducing our current prison overpopulation (since Australia is no longer an option). Our guys (no gals of course and they better be straight as an arrow) get to go to heaven when their guts spill out and their guys (and it’s ok if a few gals are droned out) can go to hell. What rapture in their tribulation. This, too, is about Jesus.

With Joseph Smith and Elvis, a historian can weigh in with more reliable facts. Joseph Smith is the founding prophet of the Church of Latter Day Saints, known to most people simply as the Mormons (don’t forget the second “m” in this term). Mormons see Smith as the last great prophet, bringing a fallen Christianity back to Christ with the kind of Big Love that even HBO can love. Baptists, on the other hand, dismiss Mormons as a cult, sort of like the priests of Baal vs. Elijah (which would have made a great Newsday cover in its time)

So who was Joseph Smith? He was born in Vermont on December 23, 1805 and thus missed being born the same day as Jesus by a mere two days. He later moved to New York, Ohio, and Illinois, where he was killed by a mob in 1844. In 1830 he published the first English translation of the Book of Mormon, which he said he received after being directed to a set of golden plates by the angel Moroni (don’t forget to keep the “i” at the end). As the authoritative Wikipedia entry exclaims, “Some witnesses described the plates as weighing from 30 to 60 pounds (14 to 27 kg),[2] being golden in color, and being composed of thin metallic pages engraved on both sides and bound with three D-shaped rings.” So there you go: a sacred object less than 200 years old and seen by several 19th century witnesses in New York. What more could you ask for? We don’t have an original Leviticus, Gospel or Qur’an. Unfortunately, Smith was told to give the golden tables back to the angel, so they are not around today to convince the vast number of unbelievers. But you can read the Book of Mormon in any Marriott hotel room, right there alongside that older bestseller, the Gideon Bible. Or you can read it online, but don’t try to order tickets for the Broadway show from this LDS site.

I doubt that few people today doubt that a man named Joseph Smith lived. We even have a possible photograph of him, and as you can see above, he looks a little like Elvis. But here is an interesting fact: while there are Elvis sightings (some have him in the arms of Big Foot) galore, no Mormon I know of thinks that Joseph Smith is still alive (if he was he would have to move to Mexico because of the multiple wife thing). So in another 200 years it is not impossible that a religion (some might say cult) of Elvis could evolve. At least here would be a prophet we could still hear. And “You ain’t nothin’ but a hound dog’ is not a bad take on Christianity, if you think about it. That beats any hymn that George Beverly Shea ever sang at a Billy Graham rally. We also have Elvis movies, with Ed Sullivan playing the role of John the Baptist. If Jesus did come back, I think he would like “Love Me Tender.” I doubt he would work undercover for Homeland Security, but who knows how 2,000 years away from terra firma would affect him.

As for Moses, Muhammad and the others, they lived far too long ago to worry about who they really were. What if all the future would know about both would be a Mel Brooks movie and a Salman Rushdie novel? What a prophet is in his (and at times her) time is water under the bridge. Who cares but some critical historian out to find an idea for a book (now that the secret Vatican documents have been milked for all their not worth)? After a couple of millennia, in the religion game it won’t be “Move over Beethoven,” (which Elvis never sang) but perhaps “Goodbye Holy Moses” and “Hello, Dolly Elvis” and “We are all Joseph Smith.” And if Newsweek is still around in a digital future, they can have a new top story: “Who is Elvis?” Let Fox News ask “Who is Joseph Smith?” Let CNN bring back both in holograms.