An ‘Israeli Spring’ for Palestine? The Call Is Out 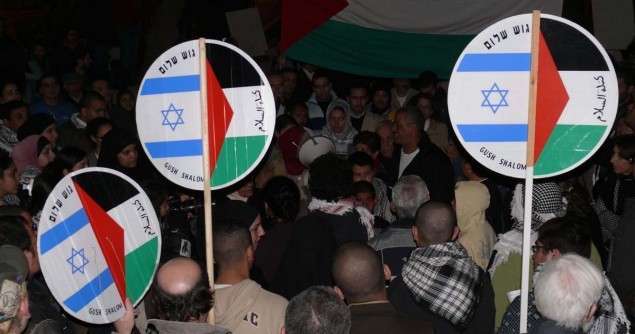 Alon Ben- Meir last week called on his fellow Israelis to take to the streets and demand an end to Israel’s occupation policies. His proactive article “Israelis Must Rise Up to Avert National Disaster,” appeals to Israelis to organize non-violent mass demonstrations similar to ‘Arab Spring’ protests that brought down Arab dictators. He pleads, “free Israel unshackled from the harsh and discriminatory policies that have converted the historically oppressed Jews to oppressors.”

The article conveys Ben-Meir’s sincere frustration and honest desire to rid Israel of its expansionist policies, which tragically dehumanize the Palestinians and the Israelis who administer its daily brutality. Nevertheless as admirable as he may be in calling for ending the moral burden Israelis carry, Ben- Meir fails to mention why Israelis and their supporters find themselves in this tragic fix.

To understand Israel today one has to first understand the ideological roots that influence it political sentiments; the philosophical values that guide and maintain its political operational strategies; and how theses ideological concepts and ideals form Israel’s policies and that are articulated and manifested through its strategic goals, expectations and actions.

Theodor Herzl, Jabotinsky and other early Zionists were secular European men and women of their time. While  their purpose was to free the Jews from European oppression and anti-Semitism, they were heavily influenced by Europe’s colonial imperialism. Zionism from the onset was envisioned as a colonial European political structure employed to exploit, acquire and expand the control of a territory that belonged to another people mainly for European Jews. Herzl first proposed Uganda in East Africa- along the line of other African countries colonized by European powers of the times and later liberated (South Africa, Rhodesia /Zimbabwe, German- South-West Africa/Namibia).

Britain agreed to Jewish settlement in East Africa “on conditions which will enable members to observe their national customs.” Jabotinsky favored the colonization of Palestine and he argued that the Zionist colonial scheme wherever implemented will meet with the same fierce resistance, “Uganda also has a native population, which consciously or unconsciously as in every other instance in history, will resist the coming of the colonizers.” Herzl later identified Palestine as the country of choice with a goal of creating greater Israel- “Eretz Yisrael”. The primary objective of the Zionist movement was to establish a social and political system run by European Jews with unequal relationships between the colonizers (Zionists) and the indigenous native inhabitants of the land colonized (Palestinians).

In 1923 Jabotinsky published “The Iron Wall”, where he laid out the rationale for Jewish colonization of Palestine. He recognized that the Palestinians would not accept the Jewish colonization of Palestine and suggested the establishment of an “iron wall of Jewish bayonets.” He explained, “This colonization can, therefore, continue and develop only under the protection of a force independent of the local population – an iron wall which the native population cannot break through. This is, in toto, our policy towards the Arabs. To formulate it any other way would only be hypocrisy.”

Jabotinsky implemented his “Iron Wall” strategy in Palestine, which became the operational guide of early Zionist militant groups (the Haganah, Irgun , Stern Gang, and the Lehi group). These groups jointly organized attacks on Palestinian civilians, UN diplomats and British mandate forces. Most famous of these terror attacks were led by Jabotinsky’s Irgun and the Lehi Group- the bombing of King David Hotel, the Deir Yassin massacre of Palestinians and the assassination of UN diplomat Count Folke Bernadotte. Interestingly future Israeli Prime Ministers were implicated in these terror acts including Menachem Begin and Yitzhak Shamir.

In 1947 when the UN proposed the partition of Palestine, Jabotinsky rejected the UN Partition plan. In Jabotinsky’s views the UN proposal was an obstacle to the Zionist movement’s vision and plan to colonize all of Palestine as well as other areas including Jordan. He argued that the UN had no right to give away any part of Israel’s future lands. Also, Begin warned against accepting the UN partition plan arguing, “Jerusalem was and will forever be our capital. Eretz Yisrael (Greater Israel) will be restored to the people of Israel, All of it. And forever.”

Why is this important? Because Jabotinsky’s ideological colonial philosophy was and remains the most prominent political force in Israel.  Jabotinsky’s ideology is manifested in Israel’s political parties, policies, military and its leadership. The Irgun was a political predecessor to Israel’s right wing Herut Party (Freedom Party) that later merged into the Likud Party. The Irgun, Stern Gang, the Lehi group and the Haganah became the Israeli Defense Forces (IDF); and Jabotinsky’s “Iron Wall” strategy formed the fundamental ideological and strategic foundation of Israel’s military. His followers became Israel’s generals, Prime Ministers and political party leaders (Menachem Begin, Yitzhak Shamir, Ariel Sharon, and Moshe Dayan to name a few).

In 1977 Prime Minister Begin founded the Likud party. Likud’s platform evokes Jabotinsky’s maximalist ideology and its charter states, “The Jewish communities in Judea, Samaria and Gaza are the realization of Zionist values. Settlement of the land is a clear expression of the unassailable right of the Jewish people to the Land of Israel.” For forty years the Likud’s core political leadership has been the leading dominant political party in Israel, and its consecutive Prime Ministers (Begin (1973-1983), Shamir (1983-1999), Sharon (1999-2005) and Netanyahu (2005- present) have funded, protected, supported and expanded Israel’s illegal settlements.

When Begin became Prime Minister his overriding concern was to maintain Israel’s control of the West Bank, East Jerusalem and Gaza. In 1981 he declared to a group of Jewish settlers: “I, Menachem, the son of Ze’ev and Hasia Begin, do solemnly swear that as long as I serve the nation as Prime Minister we will not leave any part of Judea, Samaria, [West Bank] or the Gaza Strip.”

In 1999 the Likud Charter emphasized Israel’s right to settle Palestinian lands beyond the Green Line of 1967. The Likud again evoked the biblical injunction  “hitnakhluyot”, a term Begin first coined in 1973 to describe Israel’s settlers. It implies that Israelis who settle Palestinian lands and confiscate their properties shall “inherit” the land they settle. The Likud also committed to strengthening and expanding Israel’s illegal settlement in Palestinian territories; claimed Israel’s right to the Jordan River and East Jerusalem; and rejected an independent Palestinian state. So in effect since 1977 Israel’s Prime Ministers including current Prime Minister Netanyahu have worked to advance Jabotinsky’s secular Zionist colonial scheme and his “Iron Wall” strategy.

Israel today is the one state solution Jabotinsky envisioned- it is the Greater Israel dream of the Zionist colonial movement and the functional manifestation of his “Iron Wall” scheme. In his words, “There is only one thing the Zionists want…(for) Jews would gradually become the majority…and the (Palestinians) would depend on the goodwill of the Jews… So there is no misunderstanding.” Israel’s illegal settlements and its occupation polices are the natural trajectory of Jabotinsky’s ideological framework and colonial operational system.

Israel has carefully cultivated a web of fictional claims and myths that helped rationalize its colonial territorial claims to the entire land of Palestine; and sustain its illegal occupation and settlement enterprise. Unlike today’s well-oiled Israeli myth peddlers, Jabotinsky did not mince words and was an honest ideologue. He said, “We may tell them whatever we like about the innocence of our aims, watering them down and sweetening them with honeyed words to make them palatable, but they know what we want.”  Faced with the cruel reality of its occupation Israel’s propaganda machine attempted to water down and sweeten Israel’s image carefully hiding the real intent of its occupation policies with remarkable success.

Hook, line and sinker, Israel’s supporters for decades believed its claims and excuses for continuing its illegal settlement policies, land confiscations, annexation of properties, uprooting of Palestinian olive trees (Jabotinsky had a reason for that too).  Americans also wanted to believe Israel will rescind its territorial maximalism and we never waivered from offering our diplomatic support and treasure.  And the consequence of our blind support has harmed our national interests, image and world standing. Unfortunately, Israel’s web of fictional myths muddled the truth with devastating effect on millions of Palestinian whether refugees, Palestinians Israelis and those living under Israel’s occupation.

Ben-Meir rightly points out, “The dismal failure of successive Israeli leaders to end the humiliating conditions for Israelis and Palestinians alike.” For four decade the strategic objective of every Israeli Likud government and host of its party coalitions has been to secure Israel’s control of all of Palestine. It is time for Israelis and Zionists wherever they may be to begin reflecting on the soundness of Israel’s Zionist ideological belief system and its colonial maximalist ideology. Until Israel’s Zionist colonial aspirations are fully recognized, assessed, evaluated, corrected and stopped- Palestinians and Israelis will continue to suffer its brutality.