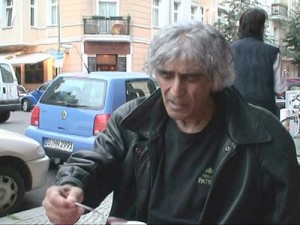 Sinan Antoon has a new Boulus translation in today’s Jadaliyya:  “The Corpse“. Coming on the heels of the Nobel-lit three-ring circus (who will it be? it should be Adonis! it should be…!), the poem made me reflect on how little-known the towering, excellent Boulus is in English—outside of Banipal readers.

Only one collection of Boulus’s has been published in English (Knife Sharpener, Banipal Books), and that posthumously. Still, his poems continue to appear here and there. And poets like Youssef Rakha and Sinan Antoon continue to talk about Boulus.

Poet Youssef Rakha wrote about Boulus, recently, in his blog:

Sargon never gathered wealth, fame or clout; he did not for a moment trade in his prodigal talent for wider or deeper recognition. To this day the Iraqi with the strange name is seldom celebrated in the mainstream cultural media. Yet as I think again of the fall Baghdad, Sargon tells me more about what it means than any Iraqi I know of.

You can read more about his brilliant life in this Guardian obituary (I didn’t even mention that Boulus is from Iraq, did I?). But beyond his fascinating personal history, Boulus had a great deal to say about language, translation, and the future of Arabic. From a 1997 interview with Boulus by Margaret Obank:

For my own work, from my own experience of the language, I have been doing these experiments with the Arabic language for a very long time, in fact from the start, and I still feel that the Arabic language is material unexplored as yet. Let’s put it this way – it’s unmined. You know, it’s like raw material for me. I feel that this language could be extended endlessly into some new idiomatic formulations – which I’m doing all the time. Look, I have a series of poems which I have been publishing in London in Al-Hayat…, which are translations but I don’t call them translations, I call them “poems after the poet.”

And, about the life of a poet:

It’s long work, always thankless. After a while, after writing for 30 years, you feel a little bit of frustration because here is a whole world where idiots are taking over things and some rich sheikh or someone, with billions of dollars and oil can live such a fabulous life, and own all the papers and magazines and here is a poet sweating and labouring to advance the language. You know what that means, I think that is one of the most honourable missions in life, and they’re totally neglected, so sometimes a poet, if he gives up, he is really justified. But then you try to fight against despair.

I tried to gather what translations I could, from hither and yon on the Internet. (Many more can be found in recent and back-issues of Banipal.) And, dearest publishers, wouldn’t you like to be responsible for preserving a collection?

Translated by Sinan Antoon: A Portrait of an Iraqi Person at the End of Time and The Corpse.

Translated by the author: The Ziggurat Builders, The Legend of Al-Sayyab and the Silt, O Player in the Shadows, A Key to the House

Translated by Youssef Rakha:  Tea with Mouayed al-Rawi in a Turkish café in Berlin, The Letter Arrived, The Refugee Tells, and more.

Translated by the author and Alistair Elliot: Siege.

Translationed by Kees Nijland: A Butterfly’s Dream, A Man Fell on His Knees, A Refugee Talking, An Elegy for Sindbad Cinema, How Eastern Singing Was Born, I Came from There, Tu Fu in Exile.