Libya: Memories of ‘the Summer of Pain’ Return 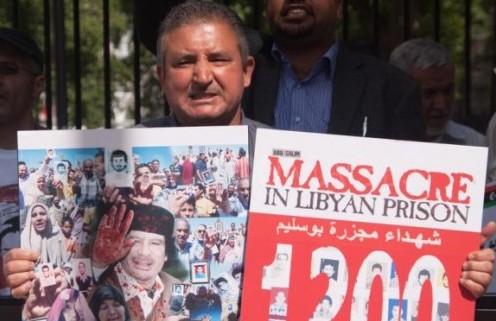 It was the third funeral that summer.

“Inna lilahi was ilayhi raji`oon,” my aunt said under her breath after she heard the news of his death. Verily, we belong to God, and to God we return. I’d heard the phrase a lot that summer of 2009 in Libya. I tripped over the words, my American tongue unaccustomed to the Arabic syllables.

But that summer visiting my family in Libya, I had much practice saying it to grieving mothers, sisters, brothers, fathers–my eyes downcast, my heart beating loudly.

He was another Abu Salim prisoner, imprisoned countless years ago without being charged with a crime. He had actually died many years earlier, in 1996, one of the 1,170 prisoners infamously, and, for a while, secretly, massacred in less than three hours by Libyan security officials at the Abu Salim prison in Tripoli.

His family was just finding out now, in 2009, like many others. The Libyan government did not officially begin informing the families of the dead until 2001 and 2002; many families are still being informed today. Colonel Muammar Gaddafi did not publicly acknowledge the massacre until 2004.

The families of the Abu Salim prison victims had no bodies to bury; rumors were that all the prisoners were buried in a mass grave. There is no way to know for sure.

The memories of that summer come rushing back as I watch the present events in Libya unfold from my home in Cypress, California. It was, after all, the Abu Salim families who kick-started this revolution. It was they who initiated protests in Benghazi in front of police headquarters when their lawyer, Fathi Terbil, was mysteriously detained by security officials.

Watching the coverage of the protests and seeing photos of dead protesters has been like being dangled over an emotional ledge. Constantly, we are wondering as we see one more body swathed in white cloth move across our screens—is that someone we know? Is that someone we love? I was born and raised in Los Angeles but we frequently visit Libya and in the short time we’ve spent there, we’ve fostered strong ties with aunts and uncles, cousins and friends. My last visit was in the summer of 2009.

That summer, I remember funeral tents occupying a space on every street corner of Benghazi, somber symbols of muffled deaths that will never go forgotten. The families of the prisoners were never surprised. They had been mourning for 13 years; the government, by informing them of their loved ones’ deaths, was only confirming what they already knew.

On June 28, 1996, prisoners at the Abu Salim prison revolted against the establishment. They took two prison guards hostage. They were objecting to deteriorating prison conditions and increasingly limited family visits. Many of them were being detained without ever having been charged of a crime. In negotiations with Libyan security officials, they included the right to have their case be heard in trial among their list of demands. Security officials promised them reform. The prisoners released one of the prison guards; the other had died.

The next day, almost 1,200 prisoners were escorted outside to the courtyards by security officials. Prison cook and detainee, Hussein El Shafa told the Human Rights Watch that he was behind an administrative building when he saw guards throw grenades into the courtyards. He saw men in khaki military hats shooting kalashnikovs. Forces used pistols to finish off any prisoners who survived the onslaught.

The massacre killed an estimated 1,170 prisoners in three hours. Cleanup was the next day; the bodies never seen again.

Though the government began informing families of the deaths, many people were still finding out during my summer vacation in Libya in 2009. Every week that summer, a new announcement was made. So-and-so’s father had died. Someone else lost an uncle; another, a son.

I spent more time in tents that summer than in my own home, the cloth of my black abaya sticking irritatingly to my skin from the Saharan humidity. In the faces of the family of the dead, I detected relief in the sea of sadness. “At least now we know,” they said.