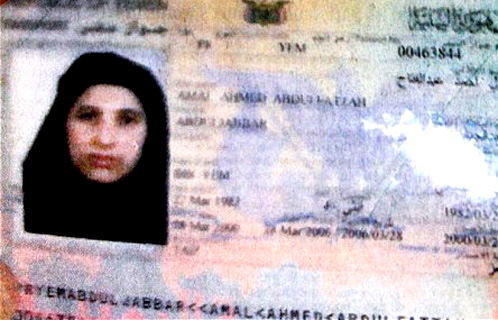 Amal al-Sada, wife of Bin Laden, was shot in the leg as she rushed the Navy Seals, according to U.S. officials

It’s inevitable that following the slaying of Osama bin Laden by Navy SEALs earlier this month that the Western media turn its attention to the terror leader’s sixth wife, Amal Ahmed Al-Sadah, and their 12-year-old daughter, Safiyah.

Most notable in engaging in pointless speculation, Islamophobia and conflating pop culture with the life of Safiyah, is Jezebel, the high traffic U.S.-based feminist website.

While we know virtually nothing about Safiyah’s life, Jezebel’s Anna North tells her readers that the young girl is an assassin in training poised to take on a jihadi role. That is, after she spends some time in a Pakistan madrassa.

Amal was shot in the leg and Safiyah may have suffered minor shrapnel injuries from a grenade during the raid at the Abbottabad compound. Safiyah reportedly witnessed her father’s death.

Safiyah was among many children living at the compound, but she has drawn the most attention. In a May 12 post on the Jezebel website, North describes Safiyah not as a victim, bystander, or even a daughter caught up in circumstances beyond her control, but a potential black ops killer. Why? Because bin Laden allegedly said, “I became a father of a girl after September 11. I named her after Safiyah who killed a Jewish spy at the time of the Prophet. (My daughter) will kill enemies of Islam like Safiyah.”

Jezebel’s North, however, never mentions that Safiyah bint Huyayy was a Jewish convert to Islam and one of the most political savvy of the Prophet Muhammad’s wives. And while North does mention that bin Laden was “attentive and playful with his children,” he also wanted to toughen his kids with camping trips to the desert. This, according to North, is cause for concern.

North implies that bin Laden’s teachings radicalized Safiyah. Bin Laden brought two Saudi women – including one with an advanced degree in Islamic studies – into the compound to home-school Safiyah and the other children. While we can speculate on the impact bin Laden’s skewed views of Islam had on Safiyah, there is no evidence that he interfered with the tutors’ teachings.

She also notes that bin Laden’s children could end up in a Pakistan madrassa. According to North, “It’s not clear what the US will do with her and the other children now in its custody, but a lot of the options look pretty bad. According to The (Toronto) Star, the kids could be sent to an orphanage, but conditions in government-run Pakistani orphanages are grim. Some in Pakistan want them sent to a madrassa, but a Pakistani ex-diplomat says, “It’d be a huge mistake. The children would have a cult following and almost certainly become jihadis.”

Left unsaid by North are the dozens of bin Laden family members, many associated with the multinational construction company Saudi Binladen Group and who have long renounced terrorism, who could take in the children.

However, North exercises a special brand of Islamophobia when she conjures up images of the recently released film, Hanna, about a teen-age girl trained as a killer.

North writes: “And while Safiyah hasn’t murdered anyone, her upbringing is a little like that of the titular teen in Hanna – she was raised in isolation, and if we take bin Laden’s words at face value, she was raised to kill. If this were a movie, she’d spend a few years training, and then wreak her revenge on her father’s killers. The job of the US now is to make sure things don’t turn out like that.”

Good grief. North wants to make sure that Safiyah doesn’t avenge the killing of her father like in the movies and because her father believed Safiyah’s name is synonymous with killing the enemies of Islam.

North manages to reduce Safiyah bin Laden to a pop culture caricature based on sketchy media reports and the fact that being raised in the bin Laden household automatically makes a 12-year-old girl a potential killer.

Jezebel up until last week usually got it right about Muslim women. Its articles on Muslims were generally non-judgmental and often its stand-alone photographs depicted young Muslim women without comment on their manner of dress. Jezebel was one of the few websites that refused to label young Muslims as anything other than just women. The website exercised remarkable restraint by not forcing Western feminist ideals on the Muslim community.

Yet Jezebel has also moved away in the past year or so from its more serious attempts to examine feminist issues to more frat house humor, titillation and reliance on four-letter words in headlines to attract readers. Perhaps North’s Islamophobic musings of the future of a 12-year-old girl is indicative of Jezebel’s own future as a feminist website. Why address what truly waits for Safiyah as she grows into adulthood when a mash-up of pop culture and true-life experiences makes for better reading? Readers can find this sort of thing at any of the innumerable anti-Muslim hate websites. Perhaps Jezebel is seeking this editorial direction.

One Response to Bin Laden’s Family Under ‘Islamaphobic’ Microscope