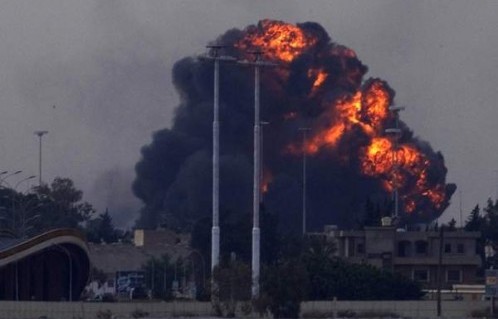 In the post-World War II international legal regime, there are only two grounds for going to war, according to the United Nations Charter. One is self-defense. The other is if the United Nations Security Council authorizes war for the preservation of international order or (with the passage of the Genocide Convention) for the prevention of crimes against humanity. The UNSC authorized intervention in Libya, and “deputized” any nations that felt the inclination to step up to this international obligation. The Libya intervention, in and of itself, is therefore legal in international law in a way that the Iraq War was not.

I personally believe that the UN attempt to forbid unilateral aggressive war is absolutely central to our survival on earth, and although it has had many failures, it is an ideal worth reaching for. Its corollary is that there are occasionally justified uses of force, but only a UNSC resolution can make them legal. Given this situation, it is desirable that the UNSC be expanded, with the addition, at the least, of India and Pakistan (you can’t add just one, and the Muslim world needs permanent representation) and of Brazil and a major African country.

That the Libyan intervention is legal does not mean that the war has been prosecuted wisely. I urged after the UNSC resolution that it be a limited intervention aiming at protecting civilians from Muammar Qaddafi’s vicious attacks on innocent crowds and reckless endangerment of non-combatants in the tenement buildings being shelled by his tanks and cluster bombs, and from his forces’ relentless rolling of tanks on Free Libya cities.

Here, it seems to me, are the mistakes made so far in the prosecution of the war:

1. President Barack Obama should have gone to Congress for authorization to stay in the Libya war. Not doing so weakened the legitimacy of the war in the US public, and involved his setting aside the legal advice he received from government lawyers. He could have set a precedent for the return to constitutional rule in the US, but tragically declined to take up that opportunity. (I have held this position from the beginning, by the way). But a corollary I am not sure American nationalists will accept is that even if Congress authorizes a war, in the absence of an attack on the US, that would be illegal in international law unless the UNSC signed off on it. That is what did not happen with regard to Iraq. Those criticizing Obama now often did not criticize W., and often still do not, for a much more important legal violation.

2. NATO has focused on a ‘shock and awe’ strategy of pounding the capital, Tripoli, especially targetting the compound of dictator Muammar Qaddafi. Shock and awe does not work, and to the extent that it looks like a targeted assassination, it raised questions in critics’ minds about the purpose of the intervention. If command and control is being hit to protect noncombatants from military operations against them, this should be explained more clearly by NATO generals and specifics given.

3. The Arab League called for the intervention, but aside from some missions flown by Qatar and some sort of support from the UAE, it is unclear that they have been involved. Provoking international intervention but then sitting back (and often carping) made the effort look like a Western attack on a Middle Eastern government, of which we have had quite enough in modern history. If the Arab League cared enough to set this war in motion, it should have been willing to have its air forces more openly involved and to have its air force generals give interviews, and demonstrate that the region as well as the world cares about the Libyan people.

4. NATO has been incredibly slow to find ways of effectively coordinating with the Free Libya forces.

5. NATO put its emphasis on taking out command and control in the capital instead of vigorously protecting civilian cities under attack. The sieges of Misrata and of the Western Mountain regions went on for weeks with very limited NATO intervention. It is incredible that Qaddafi could roll tanks across the open desert and then concertedly shell noncombatants in cities without it being possible to intervene aerially.

6. NATO (and this where the Arab League could have helped) has been incredibly slow in developing the ability to coordinate with Free Libya forces, who are the ones who must necessarily assert themselves against Qaddafi’s special forces and mercenaries.

7. The US should have already recognized the Transitional National Council in Benghazi. What, are we vacillating about whose side we are on?

8. The $70 bn. in Qaddafi’s assets frozen in the US should have been handed over to the TNC by now and/or used for relief purposes for Free Libya cities where residents are suffering from shortages of staples. The rebels need a big influx of cash if they are to be able to convince people that there is more to this struggle than just the infliction of suffering on ordinary people.

9. The Qaddafi family needs to be offered comfortable exile and guaranteed against extradition, as a sweetener for them to leave. Once they are out of the way, I predict that this struggle could end swiftly.

10. Egypt and Tunisia, who have high stakes in this struggle, need to admit that publicly and to be more pro-active in helping Free Libya, which will be their neighbor once this whole thing is over.

I think the UNSC did the right thing in calling for international intervention here. I can’t understand why the same people who have complained endlessly about the West, or the world, standing by while large numbers of people were killed in the Congo, Rwanda, Darfur, etc., are now cavilling that something practical has been done to stop the crushing of Benghazi et al.

But aerial intervention, as was discovered in the Balkans, is a very difficult way of going to war. It is slow, and uncertain, and accelerates war-weariness. In addition to the strategic and tactical mistakes, however, in this war political mistakes have worsened the situation.

War excites a lot of passions, as it should since it is so serious a matter. But it also excites a lot of black and white thinking, which is bad. Either you are for wholeheartedly or against. Some will take my essay today as a sign that I have become diffident. Not true. As I said, I think the UNSC did the right thing, and that those NATO and Arab League countries that have stepped up to the challenge are acting in accordance with international law, and that, whatever their ultimate motives, the side effect of their intervention has in fact been the salvation of thousands of lives and of a political movement for a freer Libya.

But I think we would have all been better off if the emphasis had remained on civilian protection first and foremost, if better coordination with locals had be achieved more quickly, if the US component had comported with the US constitution, and if the Arab League had not lacked the courage of its convictions. If you go back through my previous essays on these subjects, I think you will find that I have been consistent on these emphases.

And, I remain convinced that the attrition inflicted on Qaddafi’s heavy armor and other capabilities over time will lead to the end of his regime, and that most likely the remaining elites in Tripoli will find an accommodation with the TNC in Benghazi, and eventually the country will move to parliamentary elections. I’d give this scenario an 80% chance of eventuating. But life is unpredictable, and in the 20% things go bad. Given what a catastrophe Qaddafi has been for Africa and his people, though, I’m not sure even that would be worse than his remaining in power to help crush the remnants of the Arab Spring (he is allied with Syria, e.g.)