For Netanyahu Iran Is About ‘Apocalypse’ and ‘Mushroom Clouds’

Israeli Prime Minister Binyamin Netanyahu demanded on Sunday that the world community constrain Iran to change its “genocidal policy” toward Israel, in the course of a speech in which he attacked President Obama’s current round of negotiations with Iran over its civilian nuclear enrichment program. 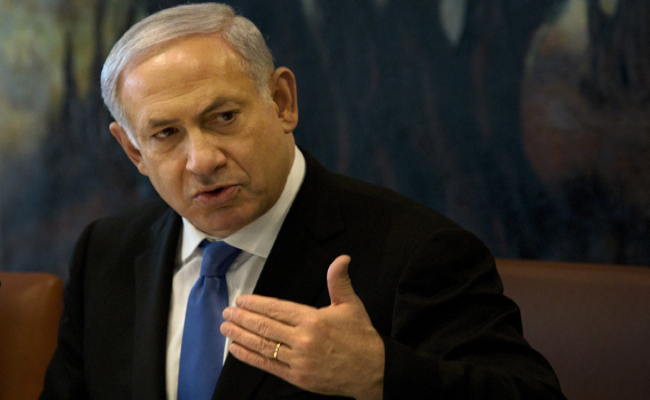 Israeli Prime Minister Binyamin Netanyahu demanded on Sunday that the world community constrain Iran to change its “genocidal policy” toward Israel, in the course of a speech in which he attacked President Obama’s current round of negotiations with Iran over its civilian nuclear enrichment program.

The rhetoric Netanyahu uses is not just sprinkled with falsehoods; it is pure propaganda, every word of it. It has been crafted to deceive. In that it is not very different from thousands of speeches given by thousands of other politicians around the world. But note that other prominent Israeli politicians seem perfectly capable of discussing Iran without invoking various forms of apocalypse or foaming at the mouth. Here is what the prime minister said on Iran:

…Ladies and gentlemen,
Our best efforts to reach Palestinian-Israeli peace will come to nothing if Iran succeeds in building atomic bombs.

A nuclear-armed Iran would give even greater backing to the radical and terrorist elements in the region. It would undermine the chances of arriving at a negotiated peace.

I would say it would undermine those peace agreements that we have already reached with two of our neighbours.

Just three days ago Iran’s representative to the U.N. reiterated the regime’s refusal to even recognize Israel. This came a fortnight after the ruler of Iran referred to Israel as a “rabid dog” and to us as not worthy of being called human. He said we were doomed to “failure and annihilation”.

And earlier in November, Khamenei called Israel “an illegitimate and bastard regime”. So the Iranian regime’s pursuit of nuclear weapons makes these remarks more than a simple matter of “sticks and stones”.

We’ve learned that in history, especially when the regime that makes these statements is actually building the capability to carry it out.

This is a regime committed to our destruction. And I believe there must be an unequivocal demand alongside the negotiations in Geneva for a change in Iranian policy. This must be part and parcel of the negotiations.

In other words, I’m saying that what is required is not merely a shift and a diminution of Iran’s capability and elimination of its capability to produce nuclear weapons, but also a demand to change its genocidal policy. That is the minimal thing that the international community must do when it’s negotiating with Iran…

And here are the falsehoods in what he said:

1. Israel is not making peace with the Palestinians. It is actively stealing Palestinian land on the West Bank and it has Gaza under a barbaric and creepy blockade intended to keep people on the edge of hunger.

2. Netanyahu frames his speech with the assumption that Iran is seeking a nuclear warhead, when all the indications are that it simply wants a breakout capacity (i.e. the deterrence that comes from outsiders knowledge that they could if they wanted to). The Supreme Leader of Iran, a theocrat, has forbidden making, stockpiling or using nuclear weapons on many occasions, which rises to the level of a hukm or theocratic decree.

3. An Iran with a breakout capacity could not force Egypt and Jordan to revoke their peace treaties with Tel Aviv. In fact, Netanyahu knows very well that Israel is arguing behind the scenes to Egypt and Jordan that they are in the same boat in confronting Iran. Neither Jordan nor the Egyptian generals are at all well disposed toward Iran, and they wouldn’t become more well disposed if Iran seemed more powerful!

4. Netanyahu accuses Iran of seeking what Israel already has. Israel sneakily and with French help constructed its own nuclear bomb, and now has hundreds of them. Israel refused to sign the Nuclear Non-Proliferation Treaty. Israel has repeatedly brandished its nukes in the region to cow others. Iran has signed the NPT and is regularly inspected by the United Nations, and doesn’t have a single atomic bomb, nor is there any proof that they have a military nuclear program.

5. In a 2003 proposal sent to the US through the Swiss embassy, President Khatami of Iran suggested the possibility of a full peace with the US and Israel. The Bush administration threw this proposal in the trash can. It demonstrates that there are forces in Iranian politics that can imagine recognizing Israel under the right circumstances.

7. Netanyahu complains that Ayatollah Ali Khamenei called the Israelis names, saying they were doomed to failure, and are “rabid dogs” and said that they “cannot be called humans.” But during the Israeli attack on Lebanon in 2006, the Israeli ambassador to the UN called Hizbullah “animals.”

Besides, Khamenei did not threaten violence in that speech. Quite the contrary. The speech was about the difference between war-making, aggressive regimes and peaceful ones (like Iran, he said). And it is true that Iran has not invaded a neighbor in an aggressive war in modern history. He was saying that aggression as a policy always fails. He instanced Saddam Hussein, who launched two wars of aggression and isn’t there any more. He claimed that the US is hypocritical in talking of peace, since it commits acts of aggression in the region and backs other states that do, as well. So that is the context of his remarks on the “Zionists.” What he said was that Israel is an aggressive country that has repeatedly launched wars on its neighbors and grabbed land in the region, and that an aggressive country cannot survive in the long run. He said that in the course of its wars of aggression, the “Zionist regime” backed by “Zionist financiers” acts like “wild beasts” and doesn’t deserve to be called “Insan.” In Persian, the word for a human being as in a human person is Aadam, named for Adam. The Arabic “insan” means human in the sense of a good person, an ethical person. It is like the Yiddish Mensch or Mentsh, which is probably influenced by the Hebrew ish, which is a cognate of the Arabic Insan. So what Khamenei is saying is that the Zionists (he didn’t say Israelis) are super-nationalistic and warmongers and therefore aren’t Mensches and their state can’t long survive if they go on with those policies. Khamenei has an unfortunate tendency to pepper his speeches with antisemitic asides such as the trope of the powerful Zionist financiers allegedly behind Israel. But to use Khamenei’s speech as proof of genocidal intentions is to do utter violence to the meaning of his text.

8. Netanyahu throws around phrases like Iran’s “pursuit of nuclear weapons,” which Iran denies and for which his former defence minister admitted there is no proof.

9. Netanyahu says that Iran has supplied the Lebanese and Palestinians with rockets. This is true. But the French supplied the Israelis with a nuclear weapon, which surely trumps little katyushas. Since Israel kept invading southern Lebanon, and tried to annex 10% of Lebanon’s territory, and occupied it for 18 years, it was inevitable that the Lebanese Shiites would mobilize to stop the Israelis from doing those things. The only large-scale use of those rockets by the Lebanese Shiites was in self-defense. Israel’s planes in 2006 wiped out 20 years of economic progress in Lebanon. The Israelis then dropped a million cluster bombs on the south of the country, which is a war crime, since they were clearly targeting the civilian population. Hizbullah has used the rockets offensively as well, but not on a significant scale and not since 2006. There is wrong on both sides. But if Netanyahu wanted Iran to stop sending the rockets, the best way to accomplish that is to pursue peace with the Lebanese, who then wouldn’t want or need rockets. Israel still occupies the Shebaa Farms and routinely threatens Lebanon, flies over it aggressively, occasionally bombs it, and has threatened to prevent the Lebanese from developing the natural gas off Lebanon’s coast in the Mediterranean. As for Gaza, what is amazing is that most Palestinians there put up with what Netanyahu has done and is doing to them with so little protest. Most of them were kicked out of their homes in places like Sderot by Jewish immigrants from Europe, then imprisoned in Gaza and denied a port, airport, or ability to export most of what they make (since 2007). But anyway, Hamas broke with Iran over its support for the Alawite-dominated Baath regime in Damascus, so Netanyahu is out of date.

10. Netanyahu neglects to mention that his government has repeatedly threatened to bomb Iran, whereas Iran has made no such threats against Israel. Indeed, since the bombing of nuclear sites in Natanz would release radioactive toxins and kill at least a hundred thousand people in Isfahan, it is Netanyahu who has threatened genocide.