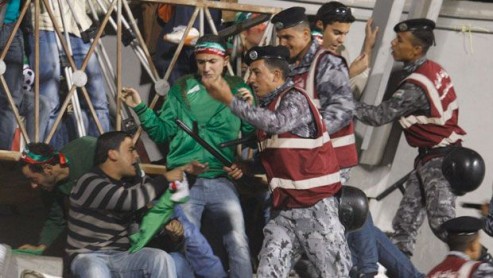 We are in a state of volatility. This seems to be the general mood on the street lately. Everyone feels it. Everyone sees it. Everyone hears or reads about it. Fights here, campus violence there, city lock-downs over there. There seems to be an endless stream of sporadic violence within the Kingdom lately, and by lately, I mean the past year or so. I would do good here to place some emphasis on the word “sporadic”, for the sake of not wanting to paint a picture of a country in chaos and in the throes of widespread violence. Far from it. But, nevertheless, it is significant enough to highlight; significant enough to warrant a discussion.

So what’s happening? Why the general upset?

The reasons people give seem to be endless. In Amman, a growing socioeconomic bubble with no end in sight, violence seems to be something that happens beyond its borders and is due, with an almost assertive absolutism, to tribalism. Within the confines of this bubble, violence is externalized; it is something carried out in the jungles of tribalism that exist beyond its borders, despite the fundamental demographic realities that prove these perception wrong. For those residing outside Amman, the state is, in one way or another, largely to blame for their discontent. Violence is the last resort of the incompetent, but it is also the first resort for the disconnected. If you’re voice isn’t being heard then your fists become your weapon of choice.

To some extent, the cases of violence are strange enough and with some lacking precedence. While it is not entirely unusual for a group of people to seek out revenge for the killing of a family member, it is somewhat unusual that their level of violence result in widespread chaos, and the subsequent lock-down of an entire city. Watching the videos of the campus violence that erupted at the University of Jordan recently, I noticed how jaded the students were. They were simply throwing things around, others were running, and others walked around like they owned the place. It was a pure expression of idleness. As if this was a group of people with no real beliefs, and no real convictions – just a lot of time on their hands.

There is always the inclination to dig deeper. To host some sort of anthropological excavation of the soul, just to understand this kind of violence. But in the end, the main reason may be just as simple as that. Idleness. A sense of people, waiting. With no expectation of something good to happen. A group of people left with a lot of time on their hands to express frustrations in the most violent of ways.

They have nothing to lose. Absolutely nothing. Many of the kids can barely get through university on a financial level, and when they do, they don’t typically have jobs waiting for them. And they know this. So you have at least a decade of transition where it is incredibly easy to get lost in the void, in the space. To be absolutely consumed with that idleness. The kind that is so despairing, the kind that manifests and grows in a status quo that nurtures it, an economy that fuels it – that the only possible product to emerge is someone who has nothing to lose, and nothing to fear. And that’s a dangerous person. A group consisting of such people can yield a dangerous movement. And one can only wonder and gauge the similarities between Jordan and Tunisia at the moment.

But we will always have those anthropological excavations – we will always wonder whether these people are the product of a society that almost champions, or, at the very least, does not necessarily disapprove of their violent measures. From parents, to family, to neighbors, to, yes, even a state where the systems of security and justice are not always consistently reactive to this kind of violence. It is the kind of situation that creates a certain kind of perception or belief that a person can get away with certain acts. That they are not bound by the same rule of law that governs everyone, that they are somehow an exception. And while this definitely plays a role to some extent, I would argue that that extent is limited to the few. I would argue that the majority are aware of the rule of law, and that they will likely be subject to it. In other words, to use an extreme, a person can grow up being told by their parents and peers that murder is okay, but at the end of the day, they know they’ll go to jail for it.

It is this idleness that worries me the most. The missed opportunities that create it. Whether it is the education system or the bad economy, the lack of general prospects or what have you – what’s produced in this crucible is a group of people with nothing to lose, and a lot of time on their hands to violently express what they do not see fit to express in any other form, whether they are conscious of that expression or not. To protest the status quo, whether they are conscious of that protest or not. Whether they are aware of that manifestation or not. And like it or not, they are a product of a system that has taught them no other way to peacefully disapprove and express their voices of discontent. And like it or not, if their goal is to be heard, suffice to say, violence is the way to go. Violence makes headlines. Sending a letter to your “elected” member of parliament doesn’t. Violence is a collective action showcasing an assertive group who are members of a disgruntled majority.

When it comes to the role of tribalism, one cannot deny their contribution. But I have never really seen it as a first step, but rather a stepping stone. In other words, it is something that comes in to play as a secondary element. A typical fight in a high school, for instance, consists of a conflict that emerges between two people or two small groups of people. The source of this conflict is some times about a female, and it is sometimes strictly about the pride and ego of a specific person. Thus, what unfolds is a display of testosterone driven mayhem. In order to drive that mayhem, backup is required. A typical fight consists of each party calling in reinforcements, and a typical fight might have upwards of 50 people being involved, who will scatter at the first sign of an authority figure. Sounds silly enough, but that’s just the reality of the situation, and perhaps a good sample of what takes place on a larger scale down the line.

Outside Amman, typical reinforcements are likely to be members of one’s tribe, especially in a country where entire towns are often made up of only two or three tribes. We are not talking about old men with canes joining the battle ground – it is young and idle 20-something year old youths who, again, have nothing to lose. In some cases, many of them are disparaged by the status quo that surrounds them, and spend their days as disgruntled citizens, relishing an opportunity to voice their discontent and frustrations in the most unconscious of manners.

But let’s not kid ourselves in to believing that all violence is tribal-driven. On the contrary, it is simply people-driven. Tribes are but one secondary element a person has to rely on, but they are not always the primary reason for a conflict to take place. And to label violence as strictly tribal is to have an incredibly narrow view of history. Worse yet, to label it as the sole problem is to ignore all the elements that come in to play, which create the sources of conflict to begin with. I would go further in saying that tribalism today is a weaker support system than it was 10 or 20 years ago. It may inflict similar damage but people are getting away with less based on their tribal connections.

At the heart of this all, we are looking at someone who has absolutely nothing to lose by going down to the street and burning public buildings, or a student destroying a campus office, that is the kind of person fueled by something that extends beyond the realms of tribalism. What drives them to this act is not tribalism but a heightened sense of idleness – an open void that offers an ideal platform for the average person to express their frustrations violently without a lingering fear of repercussions.

For those who would look to misinterpret my thoughts as a written defense of tribalism, I would encourage you to dig a bit deeper and see past the family name stereotypes. This is about what I personally believe drives people; the sources of their discontent. That’s where the discussion should be if our goal is to find solutions to this problem.