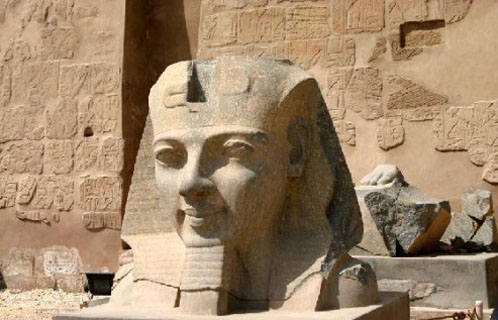 About a month ago I visited the King Tut exhibit in New York. Here was the splendor of one of the minor pharaohs of Egypt, one that died at a very young age. Other pharaohs reigned for a lifetime, such as Ramses II who was in power over three millennia ago and ruled the mighty Egyptian empire for more than half a century.

Hosni Mubarak on the Nile is no pharaoh any more than Saddam Hussein was Nebuchadnezzar on the Euphrates. Still, he has been in power almost three decades with a son said to be waiting in the wings for succession. But it is unlikely that he will match Ramses, and not simply because he would be over a century old if he did. The words of the Prophet Daniel, for a different time and place, are apt: mene mene tekel upharsin.

A Greek historian noted about the same time as Daniel that Egypt was a gift of the Nile. Not much has changed, since the vast majority of Egypt’s population lives along this river, including its delta at the Mediterranean.

One of the major changes is the population density. With over 80 million Egyptians on the narrow strip along the Nile and southern Mediterranean coast, there is hardly an Egyptian more than a stone’s throw from water. When I worked on a sanitation project in 1981 for USAID, I visited a number of “villages” in the governorates of Asyut and Minufiyya. I say “villages” because of the lack of services, since some had more than 10,000 residents. At the time, as USAID was scrambling to spend development money promised to Egypt in the aftermath of Sadat signing a peace agreement with Israel, many people thought the problems in the country insurmountable.

Egyptians have survived all kinds of plagues, and not just the biblical kind, for as long as there has been an Egypt (and that is a very long time). Now the question is how (never whether) the Egyptians will survive protests that show a widespread dissatisfaction not just with the poor state of affairs in their country but also with an aging dictator of the president-for-life kind created through manipulated democracy.

So far Mubarak is not following the exit route of Iran’s Shah (who ironically was welcomed by Sadat in Egypt) or Ben Ali. I suspect he has enough money stored away to go anywhere he wants, including the moon (where a number of Egyptians would like to see him go to).

So why does he stay? The common wisdom is that dictators, like pharaohs, hate to give up power, especially when they have had years of almost no serious rivals. Mubarak sowed the seeds of his own political demise by not building a serious successor and not changing the political system to be something other than the old one of pharaonic or installed king or military dictator rule of the sand-blasted iron fist. I think he is attempting to stay in power because he thinks he can.

In the old days this would not have been as problematic, but with the entire world (including the Arab World on al-Jazeera) watching the people’s revolution live, this is new 21st century virtual territory. The feeble attempt to thwart protest by cutting off the internet and cell phone access has certainly fueled even more disdain for the regime. Rubber bullets are bad enough, but cutting off Facebook and Twitter may have been the last straw.

I am not a prophet, even though I was named after the old Hebrew one, so I cannot predict if Hosni Mubarak has clay feet. But should he in some way survive, which looks less likely each day, his days are indeed numbered. Alas, poor Egypt, which has to deal with the changing of pharaonic guards yet again.

In the end the statues of Ramses will endure and Mubarak will be but a name in a list of modern kings on Wikipedia. Best wishes to the new pharaoh, whenever he is crowned.