Morsi’s Election: The Opportunity for the U.S. 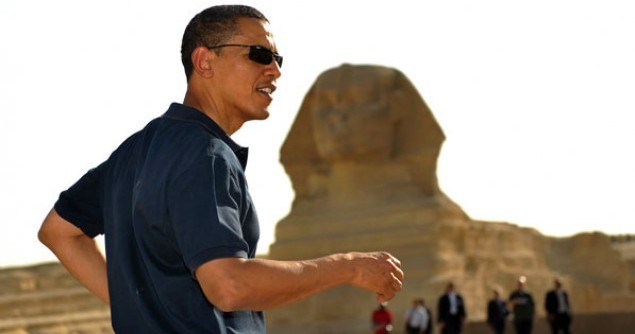 Mohamed Morsi’s victory as president of Egypt poses significant challenges for President Obama, who must now balance the election of a candidate viewed less than desirable to US interests with allaying the fears of a jittery Israel.

Obama did nothing during the revolution but anger Egyptians for his waffling over whether to support Hosni Mubarak or fully endorse the Tahrir Square protesters. But he has learned from the Bush Administration’s mistakes. George Bush and then Secretary of State Condoleezza Rice were instrumental in pushing for democratic elections in the Palestinian territories in 2006, and then quickly shunned the victorious Hamas. Bush’s failure to accept the elections as a successful exercise in democracy hastened the waning influence of the United States in the Middle East.

Obama has wisely rejected the notion among the more conservative Washington players who argue that electing a military-backed strongman or an Islamist is not democracy but a choice between evil and a lesser evil. US conservatives all too often conflate the Muslim Brotherhood with Al-Qaeda and the Ikhwan’s stated goals of establishing a caliphate. They conveniently ignore that the Muslim Brothers have long been advocating democratic reform in Egypt.

Rather, the president recognizes that no matter how repugnant the Muslim Brotherhood’s victory may seem to Americans, Morsi’s victory was the will of the Egyptian electorate. If US foreign policy analysts are looking for a silver lining in the Ikhwan’s success, they should keep two things in mind: First, Morsi hardly received a mandate from Egyptians. He received just 51.7 percent of the vote to the Mubarak holdover Ahmed Shafiq’s 48.3 percent. Second, Egyptians will not be shy about returning to Tahrir Square if Morsi’s policies prove to be unpopular. The attitude among Egyptians is that the Muslim Brotherhood must prove itself capable of returning Egypt to its former glory.

There’s no question that Morsi’s view of the world is at odds with the White House. Certainly, Morsi’s vow to free Omar Abdel-Rahman, the spiritual leader of extremists responsible for the 1993 World Trade Center bombing, has alarmed the US.
However, Obama has little choice but to engage the Muslim Brotherhood and accept its promises that Copts and women can serve in cabinet posts, to encourage free-market capitalism, and guarantee equality, social justice and freedom under Shariah.

The major challenge facing the US is reconciling Morsi’s previous statements calling for changes in the 1979 Egypt-Israeli peace treaty with his most recent vow to “respect all international agreements,” which implied keeping the treaty intact. Indeed, given that Egypt’s economy is in tatters, it makes little sense that Morsi would stir a hornet’s nest by scuttling the treaty and plunging the country into further chaos. Still, it’s not inconceivable that Morsi may want to alter the treaty by strengthening Egypt’s military presence in the Sinai Peninsula. And this is what the US fears.

Israel’s effort to negotiate a peace treaty with Syria since 2008 is all but dead in the water with Bashar Assad on his way out and Syria’s future a blank page. If a new Syrian government were less conciliatory to Israel, then policy changes by Egypt toward the 1979 treaty would only exacerbate tensions. The US repeatedly demonstrates a lack of wherewithal to solve the Palestinian-Israeli conflict and to curtail Israel’s hostility toward its Arab neighbors. It’s unlikely the Obama administration — or a Republican White House for that matter — has the chops to step in and mediate a peaceful coexistence between Israel and Egypt and Syria.

However, the Muslim Brotherhood’s rise to power marks a defining moment for the US. The West has long perceived the Ikhwan the ideological father of extremist Islam and serving as the building blocks for Hamas, Hezbollah and Al-Qaeda. Yet the organization has consistently demonstrated over the past decade its commitment to democratic reforms by working within in the Egyptian Parliament to effect change, particularly its attempts to push the Parliament into a genuine legislature.

Much like the formation of the Irish Republican Army’s political arm, Sinn Féin, in 1970, which has since risen to the second largest political party in Northern Ireland, the Ikhwan’s Freedom and Justice Party aspires for legitimacy in a new democracy. Egyptian voters have given the Muslim Brotherhood the green light, although only time will tell whether the organization is truly capable of following through on its rhetoric.

If Obama is intellectually honest about America’s foreign policy goals, then he should consider the Freedom and Justice Party a gift that represents the growing maturity of the Muslim Brotherhood. It matters little the Brotherhood’s Islamist agenda. What counts is the Egyptian people chose the organization to revive their country’s economy and return it to the international community. If the Ikhwan fails, there’s no doubt voters will kick it to the curb and replace it in the next election.