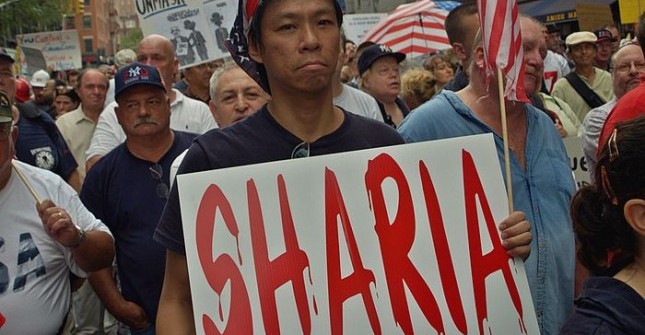 It’s happening again: another collective freakout steeped in Islamophobia. The Boston Marathon bombings have unleashed the anti-Muslim sentiment that bubbles under the surface and always shines bright in times of national hysteria. The current wave of Islamophobia the country is perpetuating and experiencing–and it’s only the beginning–is the first since the Park 51 fracas in 2010.

The news that the main suspects in the bombing are Chechen Muslims will fuel the ugly hate that has intensified since September 11. But the hate was unleashed immediately after the attack, even before the public knew that Muslims were involved. How little is needed for the brash and bigoted side of this country to come out swinging against the “Muslim enemy” we have been been so trained to fear.

It’s very easy to see the most blatant manifestations of the ugly phenomenon of Islamophobia, which casts collective blame on all Muslims. The right-wing is always the place to start. But it’s also emanating from our mainstream institutions and figures, where it’s a little more difficult to identify the Islamophobia. It’s there, though. Powerful institutions and figures are focusing on Muslims and trying to justify even more animus and surveillance targeting the Muslim community in the United States.

Let’s begin with the easiest of places: the Islamophobic media. The New York Post led the charge on this front. In the immediate hours after the Boston attack, the Rupert Murdoch-owned tabloid fingered a “Saudi national” who was injured in the blast as a suspect. It turns out he had nothing to do with the attack.

The other easy place to see anti-Muslim hate is, of course, the Islamophobic blogosphere. Pamela Geller went from freaking out about the Saudi to freaking out about two innocent people featured on the Post’s front page to freaking out about a missing university student to finally arriving at where everybody else is: freaking out about the Chechen suspects. What tied them all together was they all looked “Muslimy,” the term Wajahat Ali aptly used in Salon, and denotes how Muslims have become racialized in this country. There was also Steve Emerson, the faux terror “expert” welcomed by AIPAC with open arms, who opined about the “Saudi national” on television, as Ali Gharib documented.

And then there are the anti-Muslim hate crimes. ColorLines has chronicled some of them. They include: a white man punching a Palestinian woman who wears a hijab in Massachusetts; and Latino men beating up a Bangladeshi in the Bronx because he looked “Arab.”

But how easy anti-Muslim sentiment migrates over into the mainstream. Sure, this form of Islamophobia is not as blatant as Pam Geller’s. But it’s just as dangerous–if not more so, since more people imbibe what the mainstream tells them.

The mainstream media is busy speculating about whether Islam played a role in the decision to blow up the bombs at the Boston marathon. I heard one reporter ask the uncle of the suspects whether they were “radicalized” in a local mosque, apparently not knowing that the vast majority of mosques in the nation are nowhere near “radical.” This is the soft bigotry the mainstream is engaging in.

Another culprit that has bought into Islamophobia, and therefore legitimizing it, is law enforcement. Return back to the Saudi national story. As The New Yorker’s Amy Davidson writes, “he was the only one who, while in the hospital being treated for his wounds, had his apartment searched in ‘a startling show of force,’ as his fellow-tenants described it to the Boston Herald, with a ‘phalanx’ of officers and agents and two K9 units.” Davidson goes on to ask: “Why the search, the interrogation, the dogs, the bomb squad, and the injured man’s name tweeted out, attached to the word ‘suspect’?” The question answers itself. He was Saudi. He was Arab. That’s enough for a lot of people, including law enforcement. It speaks volumes that the only injured person to have his home searched by law enforcement was the Saudi national.

Finally, let’s look at the man who runs the city that suffered the nation’s most catastrophic terrorist attack. Mayor Michael Bloomberg sought to reassure New York City in the aftermath of the Boston attacks. But he ended up exploiting the attacks for his own political purposes. At a press conference on Tuesday, he crassly said: “The moment that we let our guard down, the moment we get complacent, the moment we allow special interests to shape our security strategies, is the moment that the terrorists are waiting for. As a country, we may not be able to thwart every attack. We saw that yesterday. But we must do everything we possibly can to try.”

“Security strategies.” It doesn’t take a genius to figure out that Bloomberg is referring to the New York Police Department’s tactic of spying on Muslim communities with no regard as to whether people are innocent or guilty of any crime. Don’t get complacent: stop criticizing the NYPD, the mayor says. They’re doing their job, and their job is to map Muslim communities, eavesdrop on conversations and catalog innocent people in police documents related to terrorism. And those “special interests”? That’s a clear as day reference to the Muslims who are fighting back against the spy program and to the allies who have joined them in that fight.

What Bloomberg doesn’t acknowledge is that the police department itself has admitted in court that their surveillance program has not stopped a single act of terrorism. Not one. Which begs the question: how can the “security strategies” Bloomberg is defending help prevent the next Boston? They can’t. But Bloomberg wants to justify a program that is Islamophobic at its core.

So here we are, nearly 12 years after September 11 unleashed a new wave of anti-Muslim hate. 44 percent of Americans say they have an “unfavorable” view of Muslims, according to a recent poll–and that was before the Boston bombings. How little has changed.