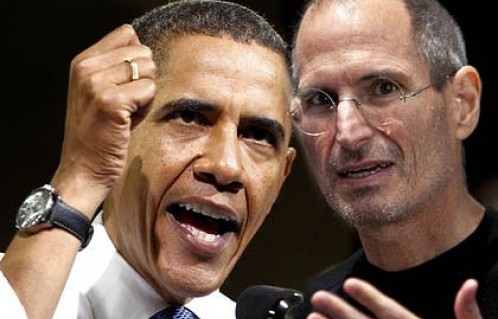 The culture wars kicked off by the 1960s are still with us. Indeed, much of the discourse of contemporary American conservatism can be boiled down to “damn liberal hippies ruined the country and they were wrong about x, y and z.” Fox Cable News and other conservative mouthpieces go to extraordinary lengths to badmouth the 1960s counterculture. They even blamed John Walker Lindh, the American member of the Taliban, on Bay Area culture. But note that Lindh from his teenaged years was interested in the dry legal aspects of Islam, and rejected Sufi spirituality. Children of liberal parents become fundamentalists all the time (in fact, Rupert Murdoch’s media are attempting actively to produce that outcome). Lindh wasn’t warped by hippie liberalism– he rebuffed it, and might as well have rebuffed it for evangelicalism.

Steve Jobs, who died yesterday, combined in himself all the contradictions of the Sixties and of Bay Area experiments in consciousness. It seems to me entirely possible that the young Jobs would have joined the OccupyWallStreet.org protests.

He is a one-man response to the charge that the counterculture produced no lasting positive change. Jobs’s technological vision, rooted in a concern for how people use technology or could use it more intuitively, profoundly altered our world. He used to say that those who had never had anything to do with the counterculture had difficulty understanding his way of thinking.

Jobs was the biological son of Joanne Simpson and Abdulfattah Jandali (a Syrian Muslim then graduate student in political science from Homs, which is now in revolt against the Baathist regime).

That is, like Barack Obama, Jobs was the son of a Muslim.

Simpson young and unmarried, gave Jobs up for adoption, but she and Jandali later wed and gave Jobs a half-sister. He never appears to have met his father a political scientist who later went into the casino business, but he did get to know his half- biological sister Mona. That is, Jobs’s childhood was wrought up with a) Muslim immigration to the United States and b) the sexual revolution, both phenomena of the 1950s that accelerated in subsequent decades. Of course, these two parts of his heritage had only an indirect impact on him.

His adoptive parents were Paul Jobs and Clara Hagopian Jobs (his adoptive mother would therefore be of Armenian heritage.)

Jobs dropped out of college, gathered Coca-Cola bottles to turn them in for money, got free meals from the Krishna Consciousness Society (“Hare Krishnas”), and later made a trip to India, where he converted to Buddhism.

I’d be interested to know how that happened. There is very little Buddhism in India. Tibetan Buddhists have centers in places like Varanasi (Banares) in North India, because these monks are political or cultural exiles from Communist China. The Dalits or ‘untouchables’ of western Indian have had a conversion movement to Buddhism. Jobs is said to have gone with a college buddy to see a Hindu guru devoted to the monkey-god, Hanuman. I really wonder whether the Buddhism was not encountered in the US rather than in India, though the trip to India may have influenced his decision.

So the whole world made Jobs, and he remade the world. Homs in Syria is the city of his biological paternal forebears. It produced scientists and historians. Hilal al-Himsi, who died in the 9th century, translated from Greek into Arabic the first four books of Apollonius’s work on the geometry of cones.

Indic spiritual traditions were important to Jobs, especially Buddhism. The quest for states of altered consciousness, which characterized some in my generation, was central to his creative vision.

The DOS operating system was something that only an engineer could love, a set of odd commands entered on a blinking line against a black backdrop. Jobs preferred icons, and changed computing forever. He, at least, was convinced that without the liberal social and spiritual experimentation of his youth, his creative vision would not have been the same.

The conservative backlash of the past 30 years has put hundreds of thousands of people behind bars for drug use (though not for alcohol use, the licit dangerous drug), and Rick Perry’s insistence that the US is a Christian nation is an attempt to erase the Steve Jobses from American history. Herman Cain’s Islamophobia is an attempt to exclude people like Jobs’s biological father from American legitimacy. But you can’t take a Muslim Arab immigrant, a Hindu guru, Buddhist monks, and some little pills out of this great American success story without making nonsense of it.

Multiculturalism and cultural and religious experimentation, not fundamentalism and racism, are what make America great. Jobs showed that they are not incompatible with that other American icon, business success. Contemporary conservatism has given us over-paid and under-regulated financiers who add no real value to anything, unlike Jobs. If the Perrys ever do succeed in remaking the US in their own image, it will be a much reduced, crippled America that can no longer lead the world in creative innovation.