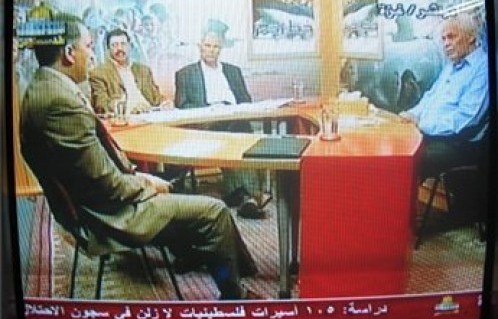 From quite a humble, but well-equipped studio in the West Bank city of Bethlehem, two young television anchors presented the first episode of a new daily newscast that could prove to be an important milestone in the Arab world. For the first time, Palestinians are initiating a process to make independent, high quality news for a Palestinian audience.

In general, local news has been delivered by non-Palestinians on channels such as Qatar’s famous Al Jazeera, Saudi Arabia’s Al Arabiya and sometimes the UK’s BBC. The producers of the Ma’an news programme say that their aim is to be “a Palestinian Jazeera”. The developments of the past year have apparently been conducive to this goal. Palestinian news has largely been side-lined while Arabic and foreign television channels have had to prioritise coverage of the revolutions across the Arab world.

Moreover, the fact that Palestinians are moving forward in institution-building and in enforcing law and order is creating a greater need for transparency in government – a need that can only be fulfilled by the presence of a free and independent media. Along with the free flow of information, the freedom to voice opinions and criticisms are essential for civic participation.

Ma’an is an unaffiliated, non-profit media organisation, which gives the newscast credibility on the Palestinian street. The competition comes from two politically affiliated channels: Palestine TV, associated with the Fatah-dominated Palestine Liberation Organisation and Al Aqsa TV, which is linked to Hamas. The fact that Ma’an is unaffiliated is good news for those who want to see the development of a viable civic culture. A media that is free to both praise the standard of government services on one hand, and criticise policies and report on corruption and mismanagement on the other, will support a shift to democratic and transparent politics.

Having a dedicated Palestinian newscast with a Palestinian agenda, broadcasting from the Palestinian Territories, has taken on an added importance in this period. The hour-long newscast receives reports from local television stations on a direct uplink, thus giving voice to people from different sectors, particularly those from marginalised areas.

An important topic featured in the newscast is the split between the West Bank and Gaza. Since the division in 2007 between the big two rival parties – Fatah (which governs the West Bank) and Hamas (which governs Gaza) – Palestinian media has also split along these lines. Ma’an adds important balance to the media scene because it maintains an office and correspondents in Gaza who deliver up-to-date news from there.

This independence also allows the channel to tackle issues and concerns neglected by other television stations. For example, a few weeks ago a Ma’an report discussed a civil servants’ strike over unpaid wages while other channels decided to ignore it. It also covered the high school general exam system, Tawjihi, and its flaws. These debates then prompt new reflection and discussion in Palestinian civil society. For example, Khalil Shaker, a university lecturer, states: ”When media raise issues that concern people, it gives them a platform to talk and reach decision makers.“

This noble ambition to seek best performance and high professional standards doesn’t imply that Ma’an’s work is yet perfect. As usual, beginnings are rough. Some of the news coverage, such as the reports on various workshops or courses happening in the Territories, are not considered compelling viewing. The editing of the newscast can still be improved, as can the arrangement of content.

These flaws are, however, improving rapidly and the programme seems well on its way to achieving the goal of becoming a different kind of television station on the Palestinian scene, one that gives voice to real people and their stories.