Time To Stand Up and Fight for Internet Liberty 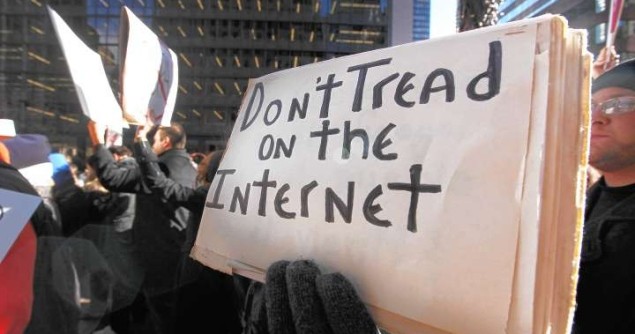 Can we live without the Internet?

Definitely! Should we? No.

Would our lives be any richer? Certainly not.

Billions of Internet connections are joining people around the world on desktops, laptops, mobile phones and tablets. And although this medium can be abused, for the most part it is a powerful platform that allows us to communicate, learn, share and be heard.

The Internet is now practically synonymous to freedom. What that freedom of expression can accomplish is written daily all over one’s face.

Two events this month cemented this yearning and defense of a free Internet: The Declaration of Internet Freedom and the landmark July 5 vote by the United Nations Human Rights Council endorsing a resolution upholding the principle of freedom of expression and information on the Internet.

The Declaration of Internet Freedom by Sascha Meinrath and Craig Aaron was published on July 2 and originally appeared in Slate.

They say, “Internet freedom isn’t a left or right issue — it should matter to everyone who cares about the health and future of democracy.

“Today a full third of the world’s population is now online. And as the importance of the Internet as a platform for participation and expression increases, it’s all the more vital that we keep it open and free from censorship, surveillance and discrimination.

“At this very moment, opposing political, commercial and ideological forces are fighting to determine how open or closed the Internet will become. Fundamentally, we are faced with the very real possibility that the most important communications platform in society today could devolve into a fragmented, censored archipelago.

“But there are signs that we can avoid that fate. On January 18, more than 100,000 websites and more than 7 million users [including Mich Café] spoke out against the Stop Online Piracy Act [SOPA] and the Protect IP Act [PIPA] — the two bills in [the U.S.] Congress that would have undermined participatory democracy and human rights by censoring the Internet. As much as this battle demonstrated the power of online organizing, it also demonstrated the need for a proactive vision for the future of the Internet.

“Today, we — representatives of the New America Foundation’s Open Technology Institute and Free Press — join more than 100 organizations, ranging from Amnesty International and the Electronic Frontier Foundation to Mozilla and Cheezburger, Inc., in announcing a Declaration of Internet Freedom. Centered on core principles of free expression, access, openness, innovation and privacy, the declaration’s goal is to spark a global discussion among Internet users and communities about the Internet and our role in protecting it.

“The Internet is now inseparable from the functioning of democracy. When corporations or governments undermine freedom of expression online or block innovative technologies, they manipulate the democratic process, marginalize important constituencies and often silence voices of dissent.

“In December 2011, Secretary of State Hillary Clinton warned: ‘Fragmenting the global Internet by erecting barriers around national Internets would change the landscape of cyberspace…’

“As a global interconnected platform, the Internet has tremendous potential for cross-cultural conversations and debate, but only insofar as the medium remains free from government and commercial censorship and abuse.

The authors of the Declaration emphasize, “The declaration is designed not to be the final word but rather to spark a much larger discussion. If you agree with the principles we’ve crafted, we welcome you to sign on. But we are just as interested in why you disagree with them or what you think is missing.”

At the UNHRC special event held in Geneva, under the theme Social Media and Human Rights, participants were universally of the view the Internet should remain an open and free forum, accessible to all at any time. However, there was also a common view the extraordinary freedom of expression offered by the Internet carried with it additional responsibilities which had to be accepted by everyone — governments, individuals and the companies providing the social media platforms.

The resolution is a landmark in view of the continuous blocking of the Internet in many countries as well as the harassment and imprisonment of bloggers and online activists. It also upholds the principle of freedom of expression and information on the Internet.

The governments of the Human Rights Council confirm for the first time that freedom of expression applies fully to the Internet. A global coalition for a global and open Internet has been formed. The challenge now, the Council says, “is to put these words into action to make sure people all over the world can use and utilize the power of connectivity without having to fear for their safety.”

The Human Rights Council resolution (A/HRC/20/L.13) was adopted without a vote. The Council affirms that the same rights that people have offline must also be protected online, in particular freedom of expression; calls upon all States to promote and facilitate access to the Internet and decides to continue its consideration of how the Internet can be an important tool for development and for exercising human rights.

Guided by the Charter of the United Nations,

Recalling all relevant resolutions of the Commission on Human Rights and the Human Rights Council on the right to freedom of opinion and expression, in particular Council resolution 12/16 of 2 October 2009, and also recalling General Assembly Resolution 66/184 of 22 December 2011,

Noting that the exercise of human rights, in particular the right to freedom of expression, on the Internet is an issue of increasing interest and importance as the rapid pace of technological development enables individuals all over the world to use new information and communications technologies,

Taking note of the reports of the Special Rapporteur on the promotion and protection of the right to freedom of opinion and expression, submitted to the Human Rights Council at its seventeenth session, and to the General Assembly at its sixty-sixth session on freedom of expression on the Internet,

1. Affirms that the same rights that people have offline must also be protected online, in particular freedom of expression, which is applicable regardless of frontiers and through any media of one’s choice, in accordance with articles 19 of the Universal Declaration of Human Rights and the International Covenant on Civil and Political Rights;

2. Recognizes the global and open nature of the Internet as a driving force in accelerating progress towards development in its various forms;

3. Calls upon all States to promote and facilitate access to the Internet and international cooperation aimed at the development of media and information and communications facilities in all countries;

4. Encourages special procedures to take these issues into account within their existing mandates, as applicable;

5. Decides to continue its consideration of the promotion, protection and enjoyment of human rights, including the right to freedom of expression, on the Internet and in other technologies, as well as of how the Internet can be an important tool for development and for exercising human rights, in accordance with its program of work.

If I sometimes look back in time, I wonder whether the Lebanon civil war would have lasted 15 years had the Internet existed in 1975. How different my life would have been…

Whereas now we can’t live for a couple of hours without being connected, we spent all the war years trying to forget telephones existed. The fax was the great novelty that we could only contemplate because there were no telephone lines!

I am a firm believer and defender of a free and open Internet as a Human Right as well as free WiFi.