How Blogging Can Be Your Company’s Voice 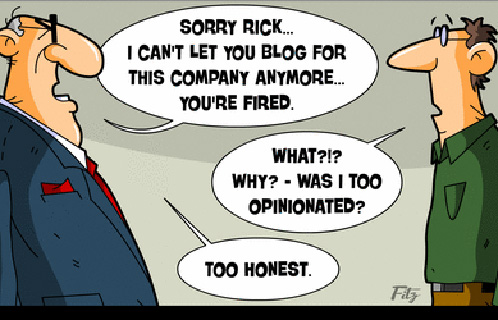 Here’s a written version of a talk I gave yesterday to a group of businesspeople in Bahrain about blogging for business. Not particularly profound, but hopefully useful to people whose companies haven’t woken up to the possibilities of getting their people to cast their bread upon the cyberwaters. Funny thing was, I was the oldest person there!

Most people use blogging sites like WordPress. It takes fifteen minutes to get up and running, and hey presto, you can tell the world about your miserable spouse, your cat, how depressed you are and how Osama has joined Elvis in a desirable residence on the moon.

But if you were more charitable, you would say that there are a few hundred bloggers, or a few thousand at most, whose views are highly influential, and whose sites attract visitors in the tens and even hundreds of thousands. You would also say that blogs give people a voice unmediated by the conventional media. Whether you want to listen to those voices is up to you.

What have blogs to do with business?

Let me start with a couple of personal stories. I started a business in Bahrain about twenty months ago. Throughout that time I have resisted glossy brochures. My business very much depends on personal credibility, and brochures don’t deliver credibility. Anyone can produce a brochure, just as anyone can produce a flashy website. But by and large, people buy from people. Provided you can convince your potential customers that you are not one man and his dog – that you have something real and valid to offer – the decision they will make about doing business with you largely rests on your personal credibility.

So when I arrived in Bahrain, I started writing a blog. I wrote articles about all the things likely to interest my customers – education, training, organisational development, and people issues. When I wanted to keep in touch with people, I not only made the obligatory visits and phone calls. I also sent them links to my blog. And the stuff I wrote was my take on issues – not the kind of starchy white papers you’re likely to find on a company website. Some of the stuff I wrote, and still write, is quite idiosyncratic – designed to provoke, to make people think. And by writing this stuff I forced myself to form opinions on a wide range of topics related to the Middle East. So even if people didn’t follow the links I emailed them, I still had “a view” on a wide range of topics close to their hearts

Eventually I started writing about other topics – history, sport, politics and religion for example – some of which you aren’t supposed to discuss in polite society.

So for those who bothered to read my stuff, there was the possibility that I would come over as a three-dimensional person rather than some boring apparatchik when I met my customers.

Has this helped me? Undoubtedly yes. To give an example of how, I was on holiday a couple of months ago, and I got a call from a PR person who subscribes to my blog. She had been given three hours to prepare some messages for the CEO of a local investment bank who had a TV interview the next day. He wanted to talk about examples of countries that have recovered from worse situations than the one Bahrain has found itself in over recent months. She contacted me because I was the only person she knew who in such a short time could give her a briefing on Truth and Reconciliation processes in other countries. Being highly susceptible to flattery from charming women, I said yes. And in that time period I was able to come up with briefings on South Africa, Argentina, Rwanda and a couple of other countries.

Blogging, together with the social networking tools such as Facebook, Twitter and YouTube, has developed beyond a community of angry, axe-grinding, lovesick  denizens of the night. CEOs are realizing that by writing a personal blog, they are giving their companies a human face. Techies are communicating with other techies, and talking about new products their companies have developed. And employees are giving a personal window into life at their companies that can significantly boost employer brands.

What’s more, everything you can say about companies even applies to politics. For goodness sake, even Mahmoud Ahmadinejad has a blog!

Finally, it’s worth noting that not only are companies using blogging to enhance their brands, but they are using monitoring tools to find out what people think about their products and their reputations.

So blogging is entering the mainstream – an important weapon in a communicator’s armoury.

Here There be Dragons

Ah, you might say, the thought of my downtrodden employees moaning about my company in a blog doesn’t bear thinking about. Fair comment – so there need to be guidelines. About what they can say and what they can’t. About confidentiality and intellectual property. In fact, if you haven’t inserted some clause in employee contracts about how and under what circumstances they can talk about the company – on the social media as well as blogs, you ought to start thinking about that now.

If you manage to persuade your CEO to write a blog, you’d better make sure he or she writes lively and engaging content. Otherwise their blog will have the opposite effect – people will think that the company is run by robots. So if they can’t write, get someone to write for them. And make sure that they post regularly – the occasional sermon from the corporate mount is not likely to inspire the multitude.

Remember also that blogging and the social media are only one weapon in the armoury. In other words, if your CEO or marketing people get the idea that you can cut your marketing budget by 80% by using the social media to the exclusion of more conventional methods of branding and marketing, politely put them right. The chances are that you will still need the dark arts of conventional PR. You still need TV, advertising, cozying up with the print media, especially if your audience is not social media aware. But don’t forget that there are plenty of retired 70-year olds on Facebook these days, and putting their life stories into interminable blogs. The social media is not just for the young and cool. Am I young and cool? I don’t think so.

Also, don’t think of blogging in terms of the conventional media. The best blogs are interactive – they are a conversation. So make use of the ability of readers to post comments to talk to people one-on-one. You will have a chance to rebut, elaborate and even learn from your readers. A much richer mix than “broadcast only”.

Finally, if you are going to blog for your business, do it properly. Take advice on how to reach the widest possible audience. Consider offering your stuff to blogs of blogs. Huffington Post and the Daily Beast attract audiences larger that most conventional print media in the US. Here in the Middle East, there are a few sites that use many bloggers, and they can usually attract larger audiences than you can. For example, a site in Dubai uses my stuff, and each of my articles has a respectable readership. Not huge, but great for my purposes. In time you will build up your own subscriber base – people who get an email every time you post – so you can start pushing your message as well as waiting passively for people to visit your site.

So that, in a nutshell, is blogging for business. If I’ve been preaching to the converted, I’m sorry for telling you what you already know. If not, I hope this talk has given you some food for thought.

It was interesting to find that on a show of hands, there was only one blogger present apart from me, and about 50% of the audience never read blogs. So maybe blogging is not so mainstream after all. I should also note that although I originally started blogging for a specific business reason, these days I write for love, and any business benefit is “collateral damage”. Evidence of that is that you will never see my company name on any post.