When Will West Have Its ‘Road to Damascus’ Moment? 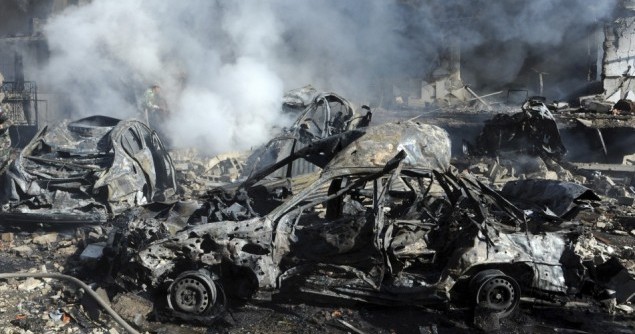 About 2000 years ago a zealot named Saul witnessed a blinding light on the road to Damascus; it was both a name changing and life changing experience. The great epistle writer and first missionary went on to create early Christianity, at least in the canonical sense. There are more blinding, life-and-death lights now ablaze on the road to Damascus as well as in Damascus. This time no one would mistake them for signs of the divine.

While the world watched as the Egyptian people elected a leader with religious convictions, the last entrenched dictator (sparing the kings and emirs who still live as though the 1001 Nights never ended) to the north is spilling the blood of his own people. Assad, the dentist turned family potentate, is more like a modern-day Nero than a latter-day hero. His siege mentality, propped up by Russian economic and political interests, is not viable in the long run, but how long can Syrians survive the short run?

The issue is not if Assad can survive, but how long the drama will continue. Obviously he continues to rule because he and his minority have the guns and few qualms about using them. In February of 1982 his father was pitiless in ordering a slaughter in the city of Hama in which perhaps as many as 20,000 were killed. Although in many ways the gaunt and lackluster Bashir is not the charismatic clone of his father, his modus vivendi for taking the life out of his enemies is the same.

There may not yet have been a blinding flash of light strong enough to overthrow Assad, but there is plenty of handwriting on the wall. Shooting down a Turkish plane, when relations with Turkey are as low as they can be without conflict , is a no-brainer dumb move. As a member of NATO, Turkey could call on its security allies to pull another Libya. If Assad thinks that such a provocation would stop Turkish support for the defectors from his regime, he is either desperate or deluded.

The American media have not lost interest in Syria, but the lack of reporters on the ground shifts the emphasis to what is happening outside Syrian borders. An article in The Washington Post focuses exclusively on the Turkish and NATO reactions to the downing of the Turkish plane. A New York Times article describes the situation of Syrian refugees across the border in Turkey. But the best coverage is from sources inside the Middle East. Al Jazeera today reports a new wave of deadly clashes inside Damascus, with attacks on military installations. Arabic sources are much fuller, including the Arabic site “Free Syria.”

Assad survives not just because he has the weapons to do so. Western waffling on what would happen if Syria became a conservative Islamic state is one of his strongest allies. This is the alibi used by Mubarak and Salih in their respective dictatordoms and it worked for many years. Despite the harsh words from our State Department, the fear of a Muslim Syria seems to outweigh disgust for the atrocities being committed. Would the secular system of Syria, where there are a number of minorities, transform so easily into another Iran? This is the question that needs to be seriously examined rather than hesitantly assumed.

Islamophobes paint and taint the results of the Arab Spring, in which Muslim majority countries espouse Islamic values, as a grave danger and threat to the West. Threat to the West, which supplies everyone but Syria and Iran with the weapons and technical know-how to control? Until we think beyond medieval mindsets, where religion is automatically othered as terrorism because of extreme elements, the shameful tragedy daily unfolding in al-Sham will not see a resolution. How many more Hamas scenarios will there need to be before the road to Damascus can be tree-lined rather than land-mined, freely passed through rather than fueled by hate?