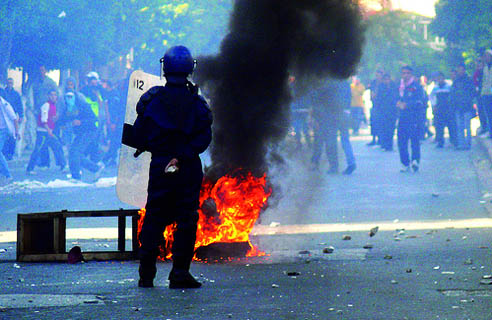 A rare wave of protests across the Arab world against widespread economic mismanagement, unemployment, corruption and lack of civil liberties as well as the probable partition of Sudan potentially set the stage for the redrawing of the political map of the Middle East and North Africa.

The protests and referendum likely to establish oil-rich southern Sudan as an independent state spotlight the failure of most Middle Eastern and North African regimes to provide economic prospects for their populations and guarantee security and equal rights for religious and ethnic minorities. A spate of recent deadly attacks targeting Christians in Iraq and Egypt has further focused attention on inflamed religious and ethnic tensions and the region’s lack of minority rights.

Middle Eastern governments fear, according to officials and Western diplomats, that an independent southern Sudan will fuel nationalist aspirations of rebels in Darfur, secessionists in southern Yemen; Shiite rebels in northern Yemen; non-Islamist controlled parts of Somalia; Kurds in Iraq, Iran, Syria and Turkey; Berbers across North Africa and Azerbaijanis in northern Iran. The region’s military and security dominated regimes also worry that the protests will further embolden their populations to vent boiling anger and pent-up frustration with long-standing authoritarian, corrupt and incompetent rule. Last week’s warning by the UN Food and Agriculture Organization (FAO) that record food prices are likely to increase even more as a result of erratic global weather patterns threatens to further tempers and tensions.

Several Arab states have moved to curb commodity prices in a bid to prevent the riots from spreading to their countries. Libya abolished taxes and custom duties on wheat-based products, rice, vegetable oil, sugar and infant milk. Morocco has begun subsidizing imports to ensure that the price of soft milling wheat does not rise in tunes with hikes on world markets.

Jordanian King Abdullah in a bid to prevent an escalation of mounting tension between Palestinians and East Bank Jordanians this week ordered his government to reduce prices of commodities, particularly rice and sugar,
freeze plans to raise public transportation fees and accelerate initiation of job creation projects. The order came as Jordanian trade unions called for nationwide demonstrations on Friday to demand better living standards
and the resignation of Prime Minister Samir Rifai. Jordan’s Islamist opposition said it had yet to decide whether it would support the protest, but warned that price hikes would spark “an unprecedented explosion” similar
to the turmoil in Tunisia and Algeria.

“The government is seeking to contain mounting public resentment. Events in Tunisia and Algeria are forcing it to act because Jordanians have seen that protests produce results,” says Mohammed Masri, an analyst at the University of Jordan’s Center for Strategic Studies. Masri was referring to Algeria’s weekend decision to reduce commodity prices in response to sustained daily protests that left at least three people dead, the Tunisian government’s inability to quell a month of demonstrations in which so far up to 50 people are believed to have been killed and Tunisian President Zine el Abidine Ben Ali’s bid this week to meet some of the protestor’s demands by announcing that he would not again run for office when his term ends in 2014, firing his interior minister, promising to release detained demonstrators and launching an investigation into corruption. “Price hikes are certain to increase anger at the government’s policies,” said Zaki Bani Rsheid, a Jordanian Islamic Action Front spokesman.

While the demonstrations in Tunisia, Algeria and Egypt as well as recent soccer riots in Jordan and Iran and human rights-related protests in Kuwait are unlikely to immediately overturn governments, they signal a growing
popular refusal across the region to continue to accept the status quo. Even in Saudi Arabia where public protests are particularly rare, unemployed teachers are publicly protesting government job creation policies. Tunisian trade unions have said they would continue their protests despite Ben Ali’s announced concessions.

The hardening of the region’s social and economic battle lines creates stark choices for both Middle Eastern and Western governments. Desperate to cling to power, Middle Eastern regimes are likely to increase repression coupled with window dressing measures that create the impression of responding to widespread discontent rather than opt for real political, economic and social reform. This week’s concessions by Ben Ali come after the president’s efforts to squash the protests by charging that the protesters were being manipulated by foreign terrorists failed. Ben Ali’s assertion contrasted starkly with the fact that Al Qaeda’s North African affiliate, Al Qaeda in the Islamic Maghreb (AQIM), has been conspicuously silent about the ongoing turmoil in its theater of operations and the fact that the protests were void of any Islamist tint.

Western diplomats say that the fact that a majority of the dead in Tunisia were killed by security forces after the Obama administration, the European Union and the United Nations called on Tunisia to exercise restraint in the use of force and respect fundamental freedoms point to a sense of alarm within the government that makes it less susceptible to US and European
pressure. “It’s inconceivable that they are not worried that this is the beginning of the end,” one diplomat said.

On a visit to Qatar this week, US Secretary of State Hillary Clinton nonetheless signaled that the United States and its European allies may be less persistent in their long-standing preference for stability in the Middle East and North Africa rather than democracy that could initially bring Islamic and more nationalist forces to power – a policy that has fueled anti-Western sentiment among large segments of the region’s population.

Addressing the Forum for the Future launched in 2004 by the G-8 group of industrial nations as a way to promote growth of nongovernmental civil group, Clinton bluntly challenged Middle Eastern leaders to open their
political systems and economies and warned that “the region’s foundations are sinking into the sand.” Clinton said the region’s governments need to share power with civic and volunteer groups to tackle issues like exploding
populations, stagnant economies and declining natural resources. Pointing to unemployment rates of 20% and up, the secretary said “people have grown tired of corrupt institutions and a stagnant political order” and are
demanding reforms, including eradication of corruption.