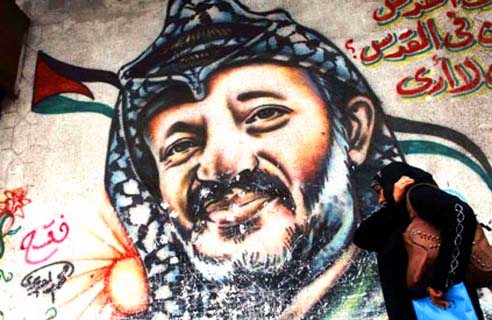 When late Palestinian President Yasser Arafat read the Declaration of the Palestinian Independence just over 22 years ago, Palestinians everywhere were enthralled. They held onto his every word during the Palestinian National Council (PNC) session in Algeria on November 15, 1988. The council members incessantly applauded and chanted in the name of Palestine, freedom, the people and much more.

Back in Nuseirat, a refugee camp in Gaza, a large crowd of neighbors and friends watched the event on a small black and white television.

The Declaration of Independence read, in part:  “On this day unlike all others…as we stand at the threshold of a new dawn, in all honor and modesty we humbly bow to the sacred spirits of our fallen ones, Palestinian and Arab, by the purity of whose sacrifice for the homeland our sky has been illuminated and our Land given life.”

Many tears were shed, as those watching the historic event recalled the innumerable “spirits of the fallen ones”. The Nuseirat refugee camp alone had buried scores of its finest men, women and children the previous year.

By then, the first Palestinian Uprising (December 1987) had swiftly changed a political equation that relegated both the Palestinian cause and Palestine Liberation Origination (PLO). Arab leaders had met in Amman in November 1987, where their discussions were focused almost exclusively on the Iran-Iraq war. The “central issue” of the Arabs didn’t even receive the usual lip service. The PLO leadership, exiled in Tunisia since the Israeli war on Lebanon in 1982, was being disowned, sidelined, and worse, discredited.

The Palestinian people watched in dismay – but not for long. Merely days after the disastrous Arab Summit, Palestinian streets erupted in fury. Tens of thousands took to the streets of the Gaza Strip, the West Bank, and even Arab towns throughout Israel, making their frustrations clear to everyone who contributed to their protracted misery and oppression.

While celebrating the people’s uprising, Yasser Arafat and the PLO leadership didn’t seem to have a concrete plan. They did, however, labor to seize the moment. PLO representatives were first consulted regionally and internationally, and then US and other Western powers attempted to court the PLO and to exact ‘compromises’. This ‘engagement’ was conditional, of course, as it continues to be till date.

The Palestinian Declaration of Independence was, then, a capitalization on all of this. Although it rekindled the ‘power of the people’ as a very relevant political factor in the Middle East equation, it also ushered the triumphant return of the PLO and Arafat.

“We call upon our great people to rally to the banner of Palestine, to cherish and defend it, so that it may forever be the symbol of our freedom and dignity in that homeland, which is a homeland for the free, now and always,” the declaration stated.

Abu Ashraf, of the Nuseirat refugee camp, was a poor man with six children. His barely treated diabetes had taken a toll on his body. Once a boxer who had competed at a ‘regional level’ (i.e. in other refugee camps in Gaza), his body was now contorted and withering. But when Arafat declared that the state of Palestine now existed – even if only on paper and largely symbolically – Abu Ashraf got up and danced. He waved his cane above his head and swayed around the room amidst the laughter of his children.

Around 100 countries now recognized “Palestine”. Ambassadors were deployed to new posts in many countries, excluding the US and European states. But this also seemed to matter little. Palestine had never sought legitimization from the very powers that had helped establish, sustain and defend Israel’s illegal occupation and violence.

The problem was that Arafat, his political party, Fatah and PLO leadership could only go so far. There was a subtle understanding among the ‘pragmatics’ in Fatah that without Western, and specifically American validation, a real, tangible Palestine could never follow the symbolic one. However, the US, the ultimate defender of Israel, had raised conditions, which the PLO readily accepted. The more conditions Arafat met, the more he was expected to meet. Among these were: acknowledging UN resolution 242, renouncing armed struggle, excluding PLO factions that the US considered too radical, and many more.

At first Arafat seemed to have a strategy: get some and demand more. But the concessions never stopped, and Arafat was constantly paraded following US demands. In return, he received very little, aside from, 6 years later, a Palestinian Authority that was merely responsible for managing small, disconnected, ‘autonomous’ areas in the West Bank and Gaza. The once glorious moment of independence was left at only that – a fleeting moment. Its political potential was prematurely and cleverly co-opted by US ‘engagement’, which yielded the Oslo agreement. Oslo, in turn, led to many disasters, which we are still witnessing today.

In late 2010 the fervor of recognitions returned, championed by Palestinian Authority leader Mahmoud Abbas. This time around, however, there is little fanfare and no genuine hope for meaningful political initiatives. Abu Ashraf died in his mid-40’s, broken and penniless. His children and grandchildren still live in the same house, in the same refugee camp. A minor difference in their life is that the Israeli military occupation of past has been rebranded and replaced by a very tight siege. The soldiers are still nearby, just a few miles away in any possible direction. And these days there seem to be few reasons to dance.

What Palestinians do have today is much gratitude to the Latin American countries that have recently joined the host of nations that recognize independent Palestine. Uruguay has promised to recognize Palestine in January 2011. Many Palestinians now understand that to capitalize on the growing international solidarity, the Palestinian leadership needs to free itself from the iron grip and political monopoly of the United States and embrace its partners of old, from the time before Oslo, the “peace process”, the Roadmap and all the other broken promises.