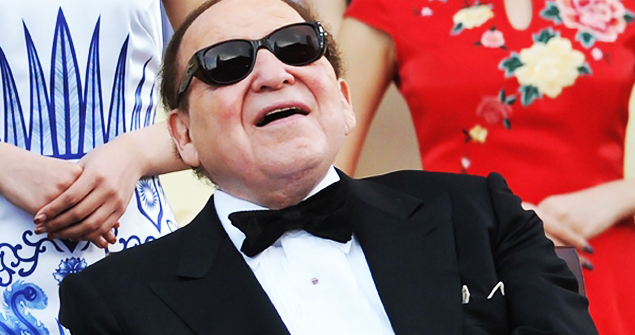 Gamblers around the world have made Sheldon Adelson not just rich, but super-rich. Forbes ranks him 8th wealthiest in the U.S. and 14th in the world. Having greased a few palms along the way in Macao and Las Vegas helped him build his monuments to greed, avarice and addiction. Now, Adelson proposes to shower a bit of that manure on the American political process.

I say “a bit” only because the $100+ million he’s whispering about donating is such a paltry part of his overall $25-billion fortune. In fact, a $100-million gift by Adelson would be equivalent to a $400 gift from an American of more modest means ($100,000 net worth). Gives you an idea of what sort of wealth we’re talkin’ about here.

The Huffington Post has the latest numbers on Adelson’s gifts and pledges to Gingrich, Romney and the Republican super-PAC machine. We’re now at $71-million and counting.

The Chamber of Commerce is raising $50-million in campaign contributions for a pro-business Republican push of which Adelson is expected to give a sizable portion. He historically gives a few million each election cycle to the Republican Jewish Coalition, which says it plans to spend at least $5-million.

All told, the current sum is $71-million, but that’s not all. Not by a long-shot. The campaign is young, and Citizens United has been very, very good to men like Adelson, who wish to remake the American political landscape into a mirror image of their own particular mix of avarice and extremism.

The talk is that he’ll give $100-million “at least,” by the end of the campaign. That’s what I used to think and wrote here a few months ago when he’d only given $20-million. But I think Adelson is a bit like his own gambling customers. Not only is he addicted to far-right politics, he’s going to sink more money into this campaign as it sucks him in even deeper, in order to prevent an Obama victory.

All of which is likely to have been in vain since it appears fairly likely at this point (barring any possible Obama screw-ups) that Romney will lose. I wouldn’t put my money on it (Shelly might take my bet!), but it appears likely. Adelson isn’t putting all his money on one horse though. Just in case Romney tanks, he’s going to sink a lot of dough into turning Congress even redder than it already is (‘red’ as in Republican, not as in socialist, God forbid).

How many rubes are there out there who actually believe that any of this embarrasses the SCOTUS solons who brought us this new sort of politics as casino gambling? And do Americans even care that this is prostituting our political process? I guess they care, but not enough to do anything about it.

The biggest zinger of today’s news is that John McCain (remember that Oldie, but goodie the McCain-Feingold Act?). He called Adelson’s donations “foreign money.” At first, my anti-Semitism meter was deep in the red zone, thinking he was calling Jews a foreign element in American political life. Of course, given that McCain comes from a ramrod straight, WASP military family, there might be a healthy dose of anti-Semitism creeping in his closet.

But after reading the Washington Post version of the story, I realized McCain was attacking the origin of much of Adelson’s wealth–Macao and China’s nouveau riche. In this, he has a valid point. Imagine that China has an urgent interest it needs addressed in its relations with the U.S. Why wouldn’t it turn to Adelson as its water carrier? If, like me, you’re deeply suspicious of Chinese motives on a variety of issues, it’s not at all far-fetched to see Adelson as an agent of a foreign power. Can he afford not to carry water for China when it’s the moving engine of his gambling empire?

Regarding Adelson’s obsession with Israel, McCain’s comments are also dead spot on. He is an ardent supporter of Bibi Netanyahu and his maximalist ultranationalist political agenda. He will bend any Republican candidate he backs into an abject, slavish supporter of such an uber-Israel agenda.

Not that the Republicans have ever been lacking in fealty to Aipac. Just that for Adelson, even this isn’t enough. He doesn’t just want support for Israel, he wants support for a Pax Israeliana in the Middle East. That is, a Middle East in which Israel dominates the region and sets the military and economic agenda. Any power that threatens Israeli hegemony, whether it be Iran or Turkey, will be swatted down viciously.

Today’s political news brings a further reminder of this. Speaking to Ralph Reed’s new evangelical political vehicle, the Faith and Freedom Coalition, Romney said that given a choice between an Iranian bomb and an Israeli attack on Iran, he’d gladly choose the latter:
Romney got applause when he said he would be “the opposite” on U.S. relations with Israel and Iran to President Obama. “He’s [Obama] almost sounded like he’s more frightened that Israel might take military action than he’s concerned that Iran might become nuclear,” Romney said.

And John McCain has the temerity to think that Republicans might have a few other valid items on their agenda that might depart from this obsession of Adelson’s!

On one thing McCain and I agree: Sheldon Adelson does have an agenda that involves promoting the interests of a foreign power (two, actually) inside the American political system. But unlike a lobbying group that might be required to register as an agent of a foreign power, Adelson will eventually own the entire political discourse (if we’re not careful).

Of course, what’s hypocritical in this is that if McCain were running for president this year, he’d be crawling hat in hand to Adelson’s suite at the Las Vegas Sands, just as Romney has done.

As Jess Unruh said decades ago: “Money is the mother’s milk of politics.” Sheldon Adelson may not have breasts, but he sure has the money and the power.