Promise of Arab Spring Failing to Deliver for Middle-Eastern Women 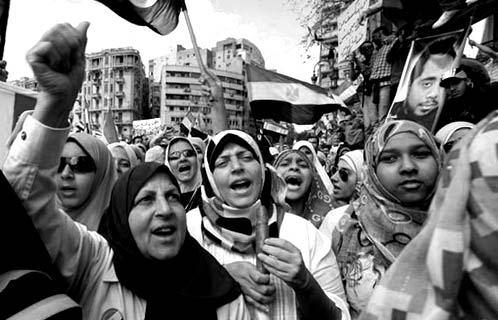 The Arab Spring has, not for the first time in the history of Middle-Eastern protest movements, proven beyond doubt that the women of the region are willing to, and capable of, taking their equal place alongside men in society, in both their public and private lives.

Over the past months women have been participating in sit-ins and marches, from Tahrir Square, to Tunis, to Benghazi. Prominent young female activists, including Lina Ben Mhenni, author of the award-winning blog ‘Tunisian Girl’, and Gigi Ibrahim, the Egyptian social activist and blogger featured on the front cover of Time Magazine, are raising the profile of politically engaged women in the Middle East.

These are not isolated examples. Women can be seen chanting in groups, or with their husbands and children, in cities across the region, yet despite their wholehearted involvement in the Arab Spring they have continued to attract criticism and judgement from some male protestors and society as a whole for their disregard for traditional gender roles.

On March 8th when around 200 women gathered in Tahrir Square on International Women’s Day they were denied the right to freedom of expression. They were surrounded by a rival protest of men and attacked with insults including “This is against Islam”, “go home, go wash clothes” and “you are not married; go and find husbands”.  The situation then turned violent. The women were outnumbered and set upon by the men, who pushed them to the ground, and in some cases subjected them to sexual harassment. Men who were sympathy-protesting with the women received similarly violent treatment. Military personnel stood by and failed to act.

The outrageous story of female protestors being subjected to virginity testing in March was responded to by an army official  who justified the actions on the grounds that these women  “were not like your daughter or mine.  These were girls who had camped out in tents with male protesters.” Such comments as these reveal a deeply rooted attitude problem. The implication is that women must know their place, and that place is not to take part in political struggles.

The problems women face in Egypt are both legally and culturally imposed. One of the most discriminatory aspects of Egyptian law has long been the Personal Status Law, which governs things such as marriage, divorce and child custody. These laws apply only to muslims (Coptic Christians have their own religious authorities to make rulings on similar disputes) are based primarily on Shari’a law, and are seriously prohibitive for women. According to personal status law a muslim women may not marry a non-muslim man, (although a muslim man may marry whomsoever he chooses) and the divorce proceedings when initiated by a women are cumbersome and difficult, while men need do little more than inform their wife of the fact.

Domestic violence is not designated as a separate crime from general physical assault, and the law allows for those who commit violent acts in “good faith” to be let off, as long as the injuries sustained by the victim are not serious. As a conservative reading of Shari’a law allows for the punishment of “disobedient women” with physical violence, this can often lead to a failure to convict.

A further legal injustice is the lenient approach the penal code takes towards honour-killings, where women are killed for bringing shame and disrepute on the family, often based on no more than rumour. The last available statistics are from 1995, and they estimate that 52 of the 819 murders committed that year were honour-killings. In many of these cases, sentences of only 6 months were given.

The Tunisian pre-revolutionary example of secularism is one that Egypt would do well to follow. Tunisia has long had the most progressive and liberal stance towards women in the region, thanks largely to their separation of church and state. In recent years successive steps have been taken to further improve women’s rights. Domestic violence has been criminalised, and carries a punishment of life imprisonment, on par with that of manslaughter, and harsher than the punishment for an ordinary assault and battery charge. Contraceptives have been made available, and since 1973, regulated abortion has been legal.

However, despite these legal measures, traditional gender roles still very much remain in Tunisian society proving that legislative reform is only half the battle; for women to be truly equal in this region, attitudes must also be changed.

Patriarchal values remain the norm, and Tunisia’s gender inequality has worsened with increasing poverty and rising social conservatism. There is little concept of sharing household or childcare responsibilities, and women who work still have to shoulder the domestic burden in its entirety. Although forced marriages are not longer legal, family opinion is weighted heavily in the decision making process, and restrictions on women’s legally guaranteed freedom of movement by husbands, fathers, and brothers is widely tolerated, particularly in rural communities.

A common problem of Egypt and Tunisia is that women often lack the economic resources to petition courts. Legal battles are expensive, and they could risk alienation from their families as a result. Even if their financial situation allows, cultural attitudes dissuade women from filing complaints in court, which is seen as a shameful public exposure of personal problems, and judges often doubt women’s credibility as either witnesses or victims.

In Egypt, a general failure to uphold laws regarding gender discrimination can also be seen. Female Genital Mutilation (FGM) is estimated to be one of the highest in Africa, where the trend is most prevalent. In 2005 an estimated 95.8% of women aged between 15 and 49 had undergone the procedure. Although it has been illegal since 2008, it is known to still be widely practiced.

Street harassment, and the long-term failure of the state to address it, is a further infringement on women’s rights. The basic right to go about their day free from intimidation is consistently undermined and at no level is the problem being addressed. The state appears to be in denial about the problem, the community turns a blind eye as it goes on around them, and young boys catcalling is often ignored by parents.

This period of rebuilding will provide a unique opportunity to start again from scratch. Despite shortcomings, Tunisia has a solid basis on which to build, and a history of progressive legislation, but they must seek to prove that their policies are more than empty words. It has been demonstrated that legal equality can only do so much to influence entrenched cultural norms. The main challenge will be whether they can also change attitudes, and reach out to rural communities, through education and public awareness campaigns.

In Egypt there have already been red flags in the process of creating a new, more equitable and democratic society. The wording of a proposed constitutional amendment in March stated as a provision that the President of Egypt could not be married to a non-Egyptian wife, implicitly stating that the President of Egypt had to be male. Egyptians, male and female, must be alert to this kind of gender-discrimination being inserted into their new constitution. Women need to continue to make their voices heard, and demand equality in the new state that they have jointly created. They need to further ensure that the laws, once created, apply regardless of geographical location, or socio-economic condition.

Fantastic concessions are being won from the Supreme Council of the Armed Forces at the moment, from pushing back elections, to the setting up of an assembly to draft a new constitution, and the dismissal of nearly 700 senior police officers. Now is not the time to let “women’s issues” fall to the back of the agenda, and they must not allow themselves to be deprived of the dignity that they have fought so hard for.