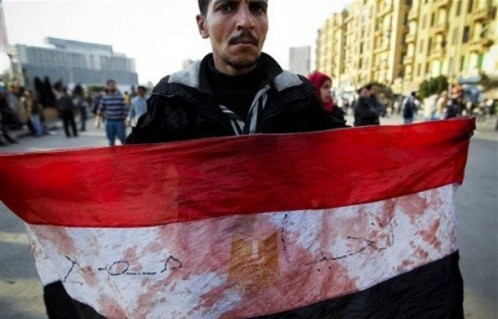 Egyptians appreciate the attention they’re getting these days.  They take great pride in their revolution, which is portrayed in the international media as being not just inspirational, but classy.  It was swift, peaceful, and led by a generation of technology-savvy activists, so the narrative goes.  This exemplary revolution has earned Egyptians a new platform with which to provide leadership in regional and international affairs.  But with this platform, Egyptians would like you to know a few things.  In fact, a desire to debunk conventional knowledge about Egypt’s revolution has become commonplace in statements from activists and academics alike.

Firstly, the Egyptian revolution was not sudden or unexpected, but was the culmination of more than a decade of popular struggle.  New theories emerging from academics like Dina Shehata from the Al-Ahram Center for Political and Strategic Studies- and backed by prominent activists- explain that the protests the world saw on January 25th in Egypt actually began in 2000 with the second Palestinian intifada.  An organization called the Popular Committee for the Support of the Palestinian Intifada provided a new model for activism characterized by street protests with pro-democracy demands led by a new generation of activists who came from a variety of ideological backgrounds but were uniformly jaded by formal politics.  This new trend of action was then recycled to animate campaigns such as Kifaya, the April 6th Youth Movement, the National Association for Change (the campaign backing Mohamed ElBaradei), and finally the January 25th protests.

This is not to say that protests grew and grew, exploding in early 2011- in fact, momentum waned significantly throughout this evolution.  But the Egyptian revolution did not “come out of nowhere,” as the world seems to believe.

Secondly, what happened in Egypt was not merely a “Facebook” revolution, nor one of young activists.  It was the participation of Egypt’s subaltern- lower class segments of society who are excluded from power structures and are certainly not plugged into the internet- that truly boosted the revolution’s momentum.  Rabab El Mahdi from the American University in Cairo explains that these people not only amplified the size and scope of protests but also contributed important revolutionary know-how to them, for example tactics in dealing with the riot police.  Let’s face it- internet gurus did not lead the charge on January 28th, picking up tear gas canisters and chucking them back at the riot police,  building effective barricades to defend Tahrir Square, or halting ambulances that were carrying ammunition to Mubarak’s forces.

Furthermore, the actual fall of Mubarak can be attributed to the millions of workers who went on strike during the last few days of the revolution.  It was they who tipped the scale of collective action in Egypt, prompting the military to force Mr. Mubarak out.

Along similar lines, the revolution was not peaceful.  Protesters fired RPGs at a police station in the Northern Sinai and burned others to the ground.  Hossam el-Hamalawy, Egypt’s best known activist, explained in a recent talk that although some Egyptian protesters chanted “silmiyya,” meaning “peaceful,” others threw rocks and molotov cocktails at the police.  Some did both simultaneously.  In el-Hamalawy’s words, “This [the revolution] was not a dinner party… People died.”  Activists’ assertion that the revolution was indeed violent is in part a reaction to rather obtuse claims from Western media outlets and academics that political scientist Gene Sharp’s theories of nonviolent resistance inspired Egyptian strategies of mobilization.

Lastly, the revolution is not over.   What Egyptians have achieved is to disassemble the country’s old order (or perhaps, to borrow a phrase from Steve Heydemann from the U.S. Institute of Peace, simply “decapitated” it).  It’s clear from unmet demands and the subsequently continued presence of protesters in Tahrir Square that the Egyptian revolution has not yet brought about revolutionary change.  Citizens are quite aware that the Supreme Council of Armed Forces, currently managing Egypt’s transition, is no less authoritarian than the Mubarak regime.  Overthrowing Mubarak was in reality the first step in a much longer-term, fluid, and transformational process.

Democracy should be not assumed as the end goal of this process.  If Egyptians are to establish a functional democracy- an elusive goal, as democratization is an open-ended pursuit- it will take much time and many setbacks.

Much of the world sees Egypt’s revolution through rose colored glasses.  While uplifting portrayals of the event are flattering, they can also prove reductionist.  In the authoritative words of Hossam el-Hamalawy himself, the notion of a spontaneous, youth-led uprising that brought democracy to Egypt via Facebook and Twitter is actually quite insulting.  It diminishes the real struggle of the Egyptian people, to which there is no happy ending in sight.

Sarah Grebowski is a freelance journalist and blogger based in Cairo. Previously, she worked as a research assistant to Dr. Amr Hamzawy at the Carnegie Middle East Center in Beirut. Sarah graduated from Boston College in 2009 with a degree in international studies and Islamic civilizations and society. For more, read her blog Cairo Comment and follow her on Twitter @grebowskisarah