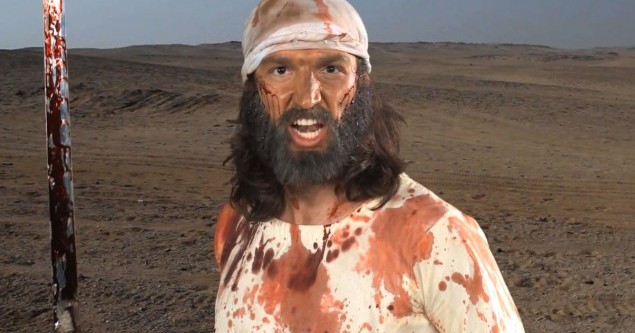 THE anti-Muslim film produced by Christian extremists may have sparked the violence that spread across the Middle East and South Asia this week. But the core issues in the following days of protests were unemployment, politicizing religion and the deep resentment against the United States for its wars that cost thousands of innocent lives in Iraq and Afghanistan. Protest organizers just got a lucky break when Egyptian television aired and dubbed in Arabic the “Innocence of Muslims” film trailer. The movie simply got the ball rolling.

The debate in America is not whether rage against the US government’s meddling in Arab affairs is justified, but why Muslims get so riled up when the Prophet Muhammad is ridiculed. After all, other prophets get the same treatment in a secular society in which free speech rights are sacrosanct. Muslims in the Middle East get the free speech thing, but often wonder why its advocates take such great pleasure in beating them over the head with it.

On Al Jazeera television the other day the news host brought in Arab and Western media types to talk about “Innocence of Muslims” and its impact in the Middle East. TJ Walker, a media-training consultant who works with Bloomberg TV and Fox News among other outlets, gave Al Jazeera’s mostly Arab and Muslim audience a brief lesson on the First Amendment, its importance to Americans and why all religious figures are equal opportunity targets for mockery and ridicule. Really, Walker implied, what’s the big deal about making fun of religious figures? We do it all the time. His tone and message was clear: Muslims should lighten up and accept the American standard of free speech.

Walker’s cluelessness about sensibilities of the audience he was addressing can be forgiven. His experience is how to train people to deal with the American media and not interpreting global news events. But he encapsulates many Americans’ “live and let live” approach to free speech. Yet the extremists who made the film are not clueless, and have much darker goals in mind. It’s one thing to parody religious figures on “South Park” and quite another to deliberately produce a film filled with falsehoods with the intention to provoke violence.

Steve Klein, the Californian who provided technical assistance for the film, acknowledged in interviews that he knew the film was provocative. He announced that it was a success. “We have reached the people that we want to reach,” Klein told the New York Times. “And I’m sure that out of the emotion that comes out of this, a small fraction of those people will come to understand …, and also for the people who didn’t know that much about Islam. If you merely say anything that’s derogatory about Islam, then they immediately go to violence, which I’ve experienced.”

Most people wouldn’t admit to falsely shouting fire in a crowded theater, but Klein seems to be proud of this accomplishment, even if it helped lead in some way to the deaths of four American citizens in Libya. We are seeing a rise in violence prompted by hate speech. Norway mass murderer Anders Behring Breivik cited the writings of America’s leading Islamophobes as inspiration. The same Islamophobic gang and their confederates are now boasting of their success. They continue to defend their right to pursue objectives that result in violence.

The US Supreme Court had addressed the issue of false and dangerous speech in 1919. Justice Oliver Wendell Holmes Jr. used the metaphor of “shouting fire in a crowded theater” when considering whether distributing anti-military draft leaflets during World War I was imminently dangerous to the nation’s security. The court ruled there was no violation of free speech because the leaflets presented a clear and present danger to the US government’s efforts to recruit soldiers during wartime. Although subsequent decisions watered down the ruling, the issue of speech posing a “imminent lawless action” remains an exception to free speech rights.

Columbia University law professor Tim Wu told the Washington Post that, “Notice that Google (which posted the film on its website) has more power over this than either the Egyptian or the US government. Most free speech today has nothing to do with governments and everything to do with companies.” Google, according to legal experts interviewed by the Post, “implicitly invoked the concept of ‘clear and present danger’ ” when it blocked access to the film in Egypt and Libya. “Innocence of Muslims” is a perfect candidate as an exception to free speech rights since its creators deliberately focused on fermenting violence. But rather than leave it to corporations, the US government must take the initiative to prosecute future purveyors of violence.