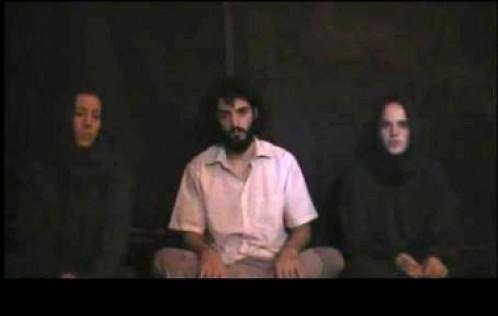 Taking hostages is hardly a new phenomenon. In far too many cases a hostage is nothing more than a political pawn, perhaps for a showcase video or as an “eye-for-an-eye” beheading. In Yemen the majority of hostages in tribal areas are negotiation acts. When Hunt Oil worked the Marib fields, local tribes would periodically “detain” American workers in order to get the government to do what they wanted or needed. The workers were treated as guests, for the most part, and it was a recognized game which generally led to the government doing what it should have done all along. This changed in the mid 2000’s with several high-profile al-Qaida killings of tourists. But generally when someone is taken hostage, the point is to get something out of it and not just to get publicity for a cause. This is especially the case when the context is tribal, since there are mechanisms within customary law for mediating such disputes.

Three French hostages kidnapped by al-Qaida fighters in Yemen more than five months ago have arrived in the Omani capital Muscat after being freed. Al Jazeera is reporting a recent release of three French aid workers who had been kidnapped last July in Hadramawt, one of the safer areas in Yemen at the moment, by suspected Al-Qaida operatives. They were released to Oman after a round of negotiations, as discussed in the news report:

A Yemeni businessman, Ahmed al-Souraimeh Ferid Ben, who was exiled to Oman in the 1990s and who worked for the hostages’ release, accompanied the French citizens on the plane.

At the military base, the freed hostages were greeted by France’s ambassador to Oman, Malika Berak.

The hostages disappeared on May 28. News of their release broke early on Monday with a statement from the French presidential palace.

At the time of their abduction, the former hostages’ car was found on the road some 20km from Shibam, a city known as the “Manhattan of the Desert” because of its spectacular high-rise mud-brick buildings, a Yemeni security official said at the time.

On July 27, tribal sources said the kidnappers were from al-Qaeda and were demanding a ransom of $12m.

A Yemeni mediator told The Associated Press that the Omani government and a Yemeni businessman paid a ransom, though he gave no figure and the ransom couldn’t immediately be confirmed.

The three appeared in an online video in September, saying their abductors’ demands had not been met.

Local sources on Monday said that leaders of the Al-Awalaq tribe led negotiations with Fahd al-Qussa, a tribe member and a leader of al-Qaeda in the Arabian Peninsula (AQAP), which kidnapped the three.

Foreigners have frequently been kidnapped in Yemen by tribes who use the tactic to pressure the authorities into making concessions.

More than 200 foreigners have been kidnapped in Yemen over the past 15 years, with almost all of them later freed unharmed.

The point of all this is that there is hostage taking and there is hostage taking. All such activity is odious, but in the Yemeni context there are rules that invariably come into play. There are a few individuals styling themselves as Al-Qaida who do not follow the rules of engagement, but they do not have free play in tribal areas. It is interesting to note that the negotiations were led by leaders of the Awaliq tribe, which is in fact the tribal origin of the recently killed Anwar al-Awlaqi. Had this been Lebanon at the height of the Civil War, there probably would have been retaliation and dead hostages, but this is Yemen. Far from being a safe haven for radical anti-Western terrorists, tribal areas maintain civil society (since the present inept government surely does not) with rules that stem back for generations.