Maspero: Has Anything Been Learned At All? 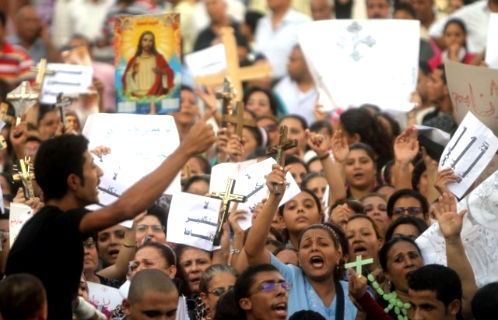 When we say history repeats itself, we never mean recent history, never as recent as 10 months ago. But the Sunday massacre in Maspero has shattered all our references, taking us back to a dark place we thought we left behind not so long ago.

Has anything at all changed? Is October 9 any different from January 28?

The lack of collective outrage at the Maspero events is itself outrageous. The brutality and premeditated excessive force used against the Copts, who were pelted with stones and bottles from the very start when they began their march in Shubra, is undoubted. Those who attempt to window-dress and justify the army and security’s criminal behavior, themselves have blood on their hands. They are part of the bigger incitement machine that culminated in the Sunday bloodshed, but started months ago when the first church was burnt in Atfih, near Fayoum in March, less than a month after we all thought we had toppled the ancient regime.

Even though on the face of it the Sunday violence is a blatant confrontation between security and Coptic protesters, its roots lie in a growing sectarian tension that has infiltrated society as a whole. Despite popular belief, this undercurrent of animosity is not fuelled by the so-called Salafis, who at best play the role of the willing agents of a much more sinister grand scheme.

It is no secret that the state security apparatus over the past decades has played an instrumental role in aggravating sectarian tension as a means to reinforce the 30-year dictatorship’s stranglehold on power on the pretext that the “secular regime” is the only guarantee for the protection of Egypt’s Copts. The lie has been so deeply engrained that most of Egypt’s Copts, and indeed its Muslims, continue to believe it until today.

It therefore came as no surprise that many are also willing to believe the Supreme Council of the Armed Forces’ spin that the military police did not fire on protesters on Sunday and did not run them over with their armored personnel carriers. That, despite the fact that they saw the footage with their own eyes, heard and read the eyewitness testimonies of those unfortunate enough to witness the massacre firsthand, many of them Muslims who were marching in solidarity with the Copts in protest at the burning of a church under construction in Aswan the week before.

True that an independent fact-finding committee has yet to investigate the entire incident including, one should assume, ordering ballistics examinations of the shell casings collected by protesters at the scene, reviewing footage and images — but no matter what the findings are, they will not answer the single most important question of all: Why is there no overwhelming sympathy for the Copts?

Why has Cabinet not resigned to object against the gross mismanagement of the transition period and specifically SCAF’s failure to handle the Maspero protest as the people’s army is expected to?

If the protesters planning a sit-in at Maspero were any other sector of society — textile workers, bank employees, teachers, doctors — would they have elicited more sympathy at least from state television whose “over-wrought” anchor, to use the unfortunate expression of the Minister of Information Osama Heikal, stopped short of calling on Egyptians to take matters into their own hands to “support” our assailed troops against the “violent” protesters who had already killed three of them and injured many others?

The answer is simply yes.

Egyptians on most levels had very little sympathy with the Aswan church protesters partly because of the way the issue has been covered by the media — ignoring completely that a crime was committed and only focusing on the fact that the constructor violated the terms of his building license and in turn by some thwarted logic deserved to be burnt down — and partly because it’s a Coptic issue.

It’s time to call a spade a spade. There is an overwhelming sentiment that Copts have no right to make “petty” demands at the expense of national unity and that if they don’t like it, they “might as well leave.”

I have heard this said many times, sadly by people who try to come across as liberal, cultured and progressive when it comes to other issues that serve their own narrow interests. True that this feeling is fueled by calls made by some extremist Copts for international protection from persecution, which reinforces skepticism that Copts’ loyalty lies with the Western (Christian) world, but to me the generalization is completely out of place.

And with the bloody events of October 9, for the first time pitting the army against peaceful protesters in an armed confrontation, it’s hard not to understand the roots of these extremists’ calls for outside protection, though one does not condone them.

A revolution in Egyptians’ attitudes towards the religious other is what we need today. The tense focus on identity politics will only take us on a path towards the hell of sectarian violence and kill all possibilities of a peaceful transition to democracy.

One Response to Maspero: Has Anything Been Learned At All?