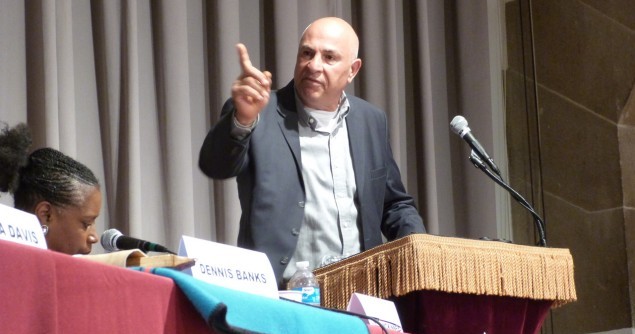 After two long days of expert testimony, the Russell Tribunal on Palestine wrapped up Sunday night (see Ethan Heitner’s reports and sketches of the days here and here). Then yesterday, the tribunal’s jury presented its findings to a United Nations committee–findings that Israel “has achieved a status of immunity and impunity by [its] complete disregard for the norms and standards of international law facilitated by the US.”

The executive summary of these findings has now been published.

The conclusion was essentially preordained, but its importance lies in the fact that the findings were presented by a jury full of luminaries like Angela Davis and Alice Walker to a United Nations body.

Among the other findings, the Russell Tribunal found that “various well-documented acts committed by Israel constitute violations of several basic rules of international law.” These violations include the right of self-determination and violation of various Security Council resolutions. Other Israeli violations of Palestinian human rights noted by the tribunal include: “the establishment of Israeli settlements”; “the expulsions of Palestinians from their territory”; and “military attacks against civilians, indiscriminate and disproportionate attacks against Gaza and Palestinian refugees camps.”

The United Nations was also singled out for opprobrium. The UN “cannot simply denounce and condemn Israel’s violations of international law. Since these oft-repeated condemnations have not resulted in the cessation of Israel’s internationally wrongful acts, it follows that the UN must do more,” the Russell Tribunal notes. The executive summary continues:

In conclusion, the UN’s failure to take action proportionate to the duration and severity of Israel’s violations of international law (war crimes, crimes against humanity, crime of Apartheid, genocide), and by not exhausting all peaceful means of pressure available to it, the UN does not comply with the obligations that States have conferred on the UN

The focus on the U.S. enabling of Israel concluded with equally harsh findings. “The Tribunal finds that Israel’s ongoing colonial settlement expansion, its racial separatist policies, as well as its violent militarism would not be possible without the US’s economic, military, and diplomatic support,” the executive summary states.

This echoes what many of the speakers at the tribunal said. Most notably, Diana Buttu, former adviser to Palestinian negotiators, gave a presentation on the U.S.’s record of shielding Israel from any accountability for its violations of international law. Buttu, as usual, was lucid and concise.

What the US has attempted to do in Palestine is “make what is unjust, just, and what is illegal, legal,” said Buttu. As an example, Buttu pointed to the 83 vetoes the U.S. has exercised as a permanent member of the UN Security Council. Of those, half of them were for the benefit of Israel. The most recent example was the Obama administration’s February 2011 veto of a UN resolution that labeled Israeli settlements as “illegal.”

The conclusions of the executive summary include a call for the “mobilization of international public opinion, especially in the US and Israel, towards a just society based on equality before the law.” The boycott, divestment and sanctions (BDS) movement was included as a “manifestation of civic society” toward the end of a just society.