Child Brides: Action Is Being Taken At Last 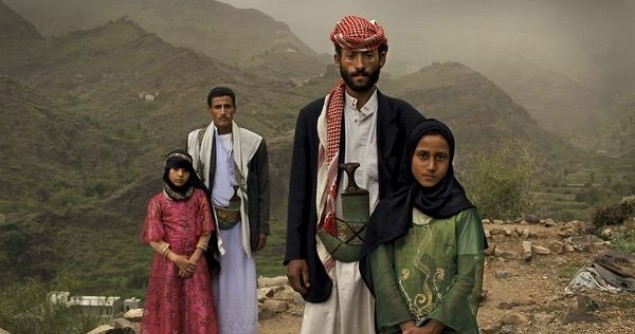 Yet, last month, another Child Bride in Yemen bled to death on her wedding night. The 13-year-old’s uterus was torn during intercourse with her 30-year-old husband.

Local rights group Save the Children said the tragedy underscored the need for the state to issue a legal age limit for marriage and to begin a national awareness campaign. The husband rejected all liability, blaming the tragedy on his late wife’s “poor health and refusal to be considerate to his needs.”

Save the Children activists warned against Yemen’s new trend of marrying off daughters too early, saying “abject poverty and a lack of education” were to blame.

Support Yemen, a non-profit independent campaign to establish a democratic civic state in Yemen where “the constitution gives people freedom, equality and social justice to every citizen,” is also fighting to preserve the childhood of little girls.The group composed of young female and male activists, journalists, videographers, photographers, web designer and bloggers have released a video (above) asking:

“How much innocence of little girls’ childhood must fade away? How many mothers must die due to inadequate healthcare? How much illiteracy must develop before education becomes free and mandatory? How many victims must suffer before a law criminalizing domestic violence is issued? How many revolutions do women need participate in so that they find place in the government and parliament?

While there are great efforts to tackle the issue of “child marriage,” it is still a common practice in many countries worldwide.

A recent article in Dubai’s Gulf News notes the UAE is at the forefront in tackling this issue and the minimum age for marriage has been set at 18. Permission to marry at a younger age is needed from a judge who must seek approval from the Ruler’s Court.

The minimum age in the UAE is higher than in Kuwait and Bahrain, which is set at 16. Yemen in 1999 eliminated the age limit altogether. Attempts by MPs to re-instate it in 2009, coupled with protests on the streets and campaigns by Yemeni Nobel Peace Prize winner Tawakkul Karman, have not succeeded.

Application of this policy in the UAE led to a significant decrease in early marriages. Gulf News says the percentage of young women married between 15 and 19 years of age dropped from 57 percent in 1975 to an astonishing eight percent in 1995.

On “child marriage,” UNICEF says: “The right to free and full consent to a marriage is recognized in the Universal Declaration of Human Rights (1948) with the recognition that consent cannot be ‘free and full’ when one of the parties involved is not sufficiently mature to make an informed decision about a life partner.Child marriage is a worldwide problem but is most prevalent in Africa and Southern Asia. Although its practice has decreased somewhat in recent decades, it remains common in rural and some other areas and among the most poverty stricken, according to the map released by UNICEF.

Child marriage is a violation of human rights, whether it happens to a girl or a boy, but it represents perhaps the most prevalent form of sexual abuse and exploitation of girls. The harmful consequences include separation from family and friends, lack of freedom to interact with peers and participate in community activities, and reduced education opportunities. Child marriage can also result in bonded labor or enslavement, commercial sexual exploitation and violence against the victims.

Because they cannot abstain from sex or insist on condom use, Child Brides are often exposed to such serious health risks as premature pregnancy, sexually transmitted infections and, increasingly, HIV/AIDS.

UNICEF says the role of government and civil-society institutions is to develop and implement systems to prevent or discourage this practice. Because child marriage is closely associated with poverty, government commitment to poverty reduction is likely to lead to a decrease in child marriages.

Governments also need to establish 18 as the legal age of marriage for girls, as well as boys, and ensure the rule is upheld. Addressing attitudes and customs that promote or condone the practice is vital to changing the acceptable age for marriage.

As always, education is the magic world. Expanding children’s knowledge and empowerment is crucial, particularly for girls. Educated girls are less likely to agree to marry at a young age. Attempts to close gender gaps in education can include the establishment of child-friendly schools, cash incentives for parents and the expansion of non-formal education.

One way UNICEF is addressing the issue of child marriage is through the promotion of girls’ education. Research shows that higher levels of education for girls prevent child marriage. (United Nations Children’s Fund, Early Marriage: A harmful traditional practice: A statistical exploration, UNICEF, New York, 2005, pp. 12-13.) UNICEF is the lead agency for the UN Girls’ Education Initiative, which works to ensure that by 2015, all children everywhere will be able to complete primary schooling.

FORWARD notes Child Brides are likely to become pregnant at an early age and there is a strong correlation between the age of a mother and maternal mortality. Girls aged 10-14 are five times more likely to die in pregnancy or childbirth than women aged 20-24. Girls aged 15-19 are twice as likely to die. Young mothers face higher risks during pregnancies including complications such as heavy bleeding, fistula, infection, anemia and eclampsia which contribute to higher mortality rates of both mother and child. At a young age a girl has not developed fully and her body may strain under the effort of childbirth, which can result in obstructed labor and obstetric fistula. Obstetric fistula can also be caused by the early sexual relations associated with child marriage, which take place sometimes even before menarche.

There is also a clear link between Female Genital Mutilation (FGM) and child and early marriages. Communities that practice FGM are also more likely to practice child marriages. In some FGM-practicing communities, FGM is carried out at puberty and then marriages are arranged immediately afterwards. It is also common in FGM-practicing communities for a man to refuse to marry a girl or woman who has not undergone FGM, or to demand that FGM is carried out before marriage.

According to a 2008 study by the Gender Development Research and Studies Center in Sanaa, just over half of the girls are married before their 18th birthday — some as young as eight. Admittedly, the problem is not unique to Yemen. In April 2012, Saudi Arabia’s Grand Mufti Sheikh Abdulaziz al-Sheikh suggested girls can be married by age 10-12.

As with all change, child marriages may take generations and decades to eliminate completely. It is certainly through education, awareness and enlightened government. Each Child Bride death is one too many…

11 Responses to Child Brides: Action Is Being Taken At Last