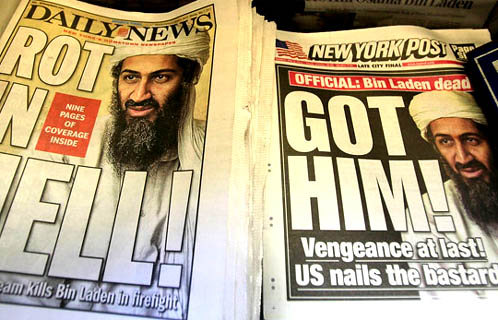 It is inevitable that the capture and killing of the world’s most wanted terrorist should have developed into the news story of the century.

What is less obvious is that the killing and its immediate aftermath were minutely choreographed with public opinion and the media clearly driving the US agenda.

The Osama bin Laden story has everything: US special forces operating in the dead of night  in another country’s jurisdiction and, apparently without that country’s permission;  a ‘hidden’  village fortress that, according to Pakistani intelligence was raided in 2003 and then ‘fell off the radar’’;  the world’s no 1 terrorist living a more or less normal existence with his family just moments from Pakistani military academy; accusations and counter-accusations of how much the Pakistani authorities knew; and how bin Laden’s presence in a luxury villa just two hours’ drive from the country’s capital remained undetected for years.

Ignoring the obvious lapses in intelligence and alleged ‘leakiness’ of the ISI, Pakistan’s secret intelligence service, that resulted first in bin Laden’s escape from US special forces in 2001, and secondly, had him holed up in a cave on the Afghanistan/Pakistan border when – if the recent news reports are accurate – he was, in fact, living in relative comfort and had been doing so since 2005/6, the bin Laden killing has been a study in news management excellence.

From the moment that President Obama alerted the world’s news media to an important announcement, and then kept them waiting for two hours before delivering it, it was clear that whatever the story, it was going to lead the world’s news for days.

Bin Laden’s immediate burial at sea was a masterstroke. It removed at once the oxygen of publicity a funeral or burial would have provided, still less deprived his followers of a shrine or rallying point for protests and from which to announce reprisals. No martyr’s shrine, no photos, no TV footage glorifying his memory for eternity on the Internet to radicalise the next generation of Islamic fundamentalists.

This provided the cue for the world’s conspiracy theorists to imply a CIA plot designed to bolster flagging domestic ratings for President Obama. No body, therefore no dead bin Laden. Instead, it was left to a small caucus of advisers – and Obama himself in an interview with CNN  – to control this most sensitive of issues: to ratify that they had seen images of the body and to confirm it was bin Laden.

The reported became reporters of one of the world’s most dramatic news stories – and who was going to doubt the word of the President of the United States of America on such an issue and then voice it publicly?

The President’s media advisors also clearly recognized the outpourings of grief and promises of retaliation that would follow publication of photos of bin Laden’s corpse. The decision not to publish must have been taken at the planning stages. However, the ‘will they, won’t they publish’ debate was allowed to run and dominated the news, within the news, for a full two days before the decision was taken not to publish the ‘gruesome’ image.

This neatly holed the conspiracy theorists’ case: acknowledge at the very highest political level that photos exist to prove bin Laden’s identity and death, then trump it with the argument for non-publication on the grounds of public decency and taste.

Even the BBC’s Washington correspondent, Mark Mardell, was moved to note in one of his reports how adroitly the US administration had trod the line between triumphalism and glee at bin Laden’s death and the need for sensitivity in case of inflaming Muslim opinion.

Today, nearly five days after the killing of bin Laden, President Obama’s administration is basking in the plaudits. Public opinion is with them and a US feel  good factor at the clinical decisiveness of the Abbottabad operation and the diplomatic handling of its aftermath is there for all to see.

One wonders if the air-punching, gung-ho approach of previous US administrations would have prompted considerably more anti-US rhetoric and demonstrations than the isolated incidents of flag-burning to date.

Only time can tell whether bin Laden’s death – coming just shy of the symbolic 10th anniversary of 9/11 and the potential for further gloating by Al Qaeda –  will prove to be President Obama’s ‘Falklands Factor’ that ensured a second term for Margaret Thatcher as UK Prime Minister on a wave of patriotic goodwill 30 years ago.

But there can be no doubt that, in the space of a week, a US President frequently accused of weakness and indecision has, in the eyes of the watching world, been transformed into the man of the moment.

2 Responses to Bin Laden: A Study in News Management