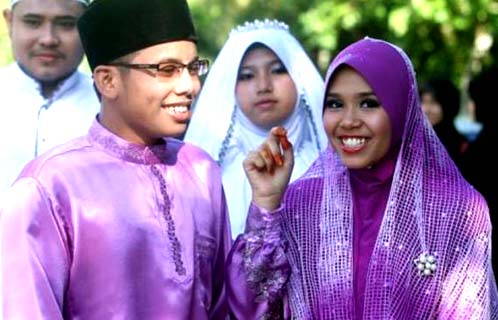 A dangerous liaison is taking place in the Arab and Muslim world that merits serious consideration. Faced with the new sweeping “Arab Spring” anxious governments and conservative Muslim clerics are advancing outlandish religious views and edicts by utilizing the voice and views of Muslim conservative women.

The women are used as intermediary mediators to maintain the status quo and squelch calls for equitable social economical and political reforms. It is important to note the use of women to counteract social and political reform is a natural evolution that is often manifested in the face of inevitable change. Nevertheless this new evolving phenomena must be well understood and counter measures must be employed – measures that are organically relevant to the cultural context and social fabric of the Arab and the Muslim world at large.

Opposition to social reforms and gender equity is not uniquely Muslim or Arab. Similar anti political social reform movements were employed here in the US in the late 19th and 20th Century. When the US faced the inevitable social and political reforms that were perceived to challenge authority; political and social norms religious and conservative groups banned together to quell the tide of change.

The American anti social reform movement  claimed to be engaged in a spiritual religious struggle to preserve Biblical principles and uphold Biblical representation of women as modeled in the Christian scripture.  According to sociologist Michael Kimmel strong opposition to women’s  equity and entry into the public sphere in the US was justified through the use of religious ideology, biblical text and accepted cultural norms. Their purpose was to “save men from pollution”, defend traditional family , morality and  preserve gender arrangements.

In the 19th Century, women suffrage opponents in the US argued against women’s entry into institutions of higher learning suggesting that education was too great a physical burden on women. Among them Harvard University professor Edward Clarke who predicted in 1873 “if women went to college, their brains would grow bigger and heavier, and their wombs would atrophy.”

In a predictable pattern opposition to social reform and calls for larger transformative social, economical and political role for men and women is manifested in the Muslim and Arab world.  The new unfolding tectonic shift in the Middle East, North Africa and the Muslim world are causing a great deal of uncertainty and fear among conservatives whether governments, Muslim clerics and even among some Muslim men and women. Although each is reacting from their own self-centric interest, nevertheless a meeting of the minds is emerging, which deserves consideration.

The recent popular revolts calling for sweeping social and political reforms, openness and accountability, worries conservative Arab and North African governments who fear the end of their reign. While some Muslim clerics fear a greater social and political role for women. Both reform rejectionists disguise their apprehension by claiming to be protectors of Muslim family and religious values. Their claims are resonating with some Muslim men and women who share a common fear of any ideas or concepts that may devalue or alter the centricity of the family in their society and culture.

It is also important to note that women in every society and culture are not monolithic.  Their diverse understanding and views on social, political reform and gender equity can range from supportive to dismissive. Political and religious leaders to control the inevitability of social change have historically used women who strongly object to gender equity, social and political reforms.

Our own history here in the US is littered with similar efforts to stop the tide of social and political change. The 19th Amendment affirming women’s right to vote in1919, ran into stiff opposition by religious leaders and women, who believed that the amendment would threaten Christian family values.

Conservative ideologues and anti social reformists activists Phyllis Schlafly and Elaine Donnelly in the late 60’s and early 70’s were supported by a coalition of Christian fundamentalist and orthodox religious leaders, conservative businessmen, Republicans, radical groups and assortment of women groups to stop the Equal Rights Amendment that was first drafted in 1923. Schlafly’s opposition to the ERA granted her praise and prominence among a collection of religious and political leaders including Reverend Pat Robertson and Reverend Billy Graham, President Ronald Reagan and conservative Republican Edwin Meese. Robertson, Graham, Reagan and Meese also claimed to be protectors of traditional family and religious values.

Interestingly, much like our own anti social reform movements a trend in the Middle East and Muslim world is unfolding where conservative women and groups are used and leveraged to contain and suppress social and gender reforms in the name of saving family and religious values.

Last month the Malaysian “Obedient Wife Club” was launched to promote the submission of women to men. Its declared purpose is the protection of family from divorce and social ills such as prostitution. Global Ikhwan the founders and funders of the Malaysian “Obedient Wife Club” were once linked to the now defunct Malaysia-based Al-Arqam fanatical religious sect that was banned in 1994. Although, their purpose is objectionable by most Americans today, in 2007 a similar message was echoed by non other than Phyllis Schlafly who said in a speech at Bates College “By getting married, the woman has consented to sex” and accordingly  “obedient wives” must comply regardless of physical and mental condition or reason.

Soon after the launching of the Malaysian “Obedient Wife Club” a Kuwaiti woman political activists, TV host, and former parliamentarian candidate Salwa al-Mutairi, suggested that to protect Muslim men from adultery it is necessary to “revive the institution of  (female) sex-slavery.” Substantiating her statement fanatical Muslim cleric Abu Ishaq Al-Huwaini suggested that more than 1430 years ago Muslims were allowed to buy and sell female “sex slaves.” Mutairi and Al-Huwaini also claimed their views are rooted in their interest in protecting moral, family and religious values.

Today Saudi Arabia is the only country that has yet to allow women to drive. In April Arab News published an article quoting Saudi women who don’t wish to claim a right shared by every woman in the world.  Since the 90’s Saudi officials and clerics have based their objection to merit Saudi women the right to drive on moral grounds and their desire to protect of the sanctity  of the Saudi family.

It is important to note that Malaysian women are credited for their important contributions to Malaysia’s social and human capital development , so are Egyptian, Syrian, Lebanese, Palestinian and Jordanian women. Kuwaiti women boast one of the highest literacy rates in the world at 92%, while according to the 2009 World Bank report Saudi female college students outnumber Saudi male students. History suggests that religion and the protection of family values are often employed by conservatives to control, procrastinate or stop the tide of social and political change. Faced with the unprecedented calls for sweeping political and social reforms, Muslim rejectionists are employing similar political and social tools that were once employed by prior anti social reform groups.

Today Arab and Muslim conservatives and social reform rejectionists are trying to maintain the status quo by using a host of conservative women to control the advancing social reform movements. Amusingly the use of women to suppress or slow  social change is indicative of the transformation-taking place across the Middle East and Muslim world. It is telling of the evolving role of women and suggests governments and clerics understand well the usefulness of women to spur or slow the tide of social change. They have come to appreciate women as effective social messengers whose voice can add credibility to their anti reform message.

The potential harm of this unfolding trend in the region  must not be underestimated. Progressive Arab and Muslim women and men must challenge these antiquated messages and messengers, otherwise the integrity of the democratic reforms they wish to see shaping the new Middle-East, North Africa and the Muslim world may be sidetracked and/or altered.

Progressive reformists must counter these provocations based on their own organic cultural context and perspective, while aware of prior and similar anti social, economical and political reform schemes.  Moves to alter or reject the full participation and equity of Arab, North African and Muslim women in the new reforms will hamper and delay the future development of the entire Middle-East and Muslim world; limit the possibilities of the social and political progress envisioned by reformists; and is a waste of an important critical talent pool and potential of more than half of the entire Arab, North African and Muslim world.

Women are essential to achieving the desired and envisioned social and political reforms sweeping the region.  They are crucial partners to the successful attainment of the social and political transformation envisaged –without their full participation the new reforms are in jeopardy.