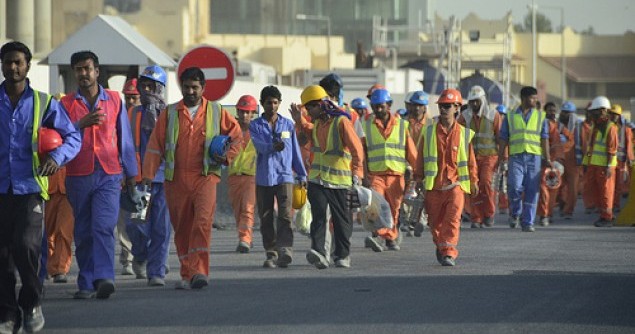 A leading human rights group has joined the international trade union movement in using Qatar’s hosting of the 2022 World Cup to pressure the energy-rich Gulf state to bring migrant labor conditions in line with international standards and allow for the emergence of independent trade unions that can engage in collective bargaining.

At the launch of a 146-page report, “Building a better World Cup: Protecting migrant workers,” Human Rights Watch joined the International Trade Union Confederation (ITUC) in rejecting Qatari moves to fend off a global campaign calling for a boycott of Qatar and stripping its right to host the tournament because of migrant labor conditions.

During the meeting on the side line of the general assembly of the International Labor Organization in Geneva, Mr. Hamidi refused to go beyond proposed changes for workers’ councils rather than independent trade unions and the replacement of Qatar’s sponsorship system with a system of contracts between employers and employees that does not give workers full freedom to seek alternative employment. Ms. Burrow was quoted after the meeting as saying that Qatari concessions failed to meet ITUC demands for application of international standards.

Qatar has repeatedly denied that it exploits foreign labor. The Qatari Labor Ministry denies that workers are being exploited. “The Ministry has received no complaint of forced labor and it is inconceivable that such a thing exists in Qatar as the worker may break his contract and return to his country whenever he wishes and the employer cannot force him to remain in the country against his will,” the ministry said in a letter to Human Rights Watch.

The human rights group published the letter as part of its report on the same day that Qatar-owned Al Jazeera English broadcast interviews with foreign workers standing in front of the labor ministry in Doha to complain about the fact that their employers had not paid them for months.

Foreign labor accounts for more than 90 percent of Qatar’s workforce in a country with the highest percentage of migrants to citizens in the world.

The ITUC with 175 million members in 153 countries has threatened Qatar with a boycott campaign of the 2022 World Cup if it fails to bring the conditions of up to one million primarily Asian workers engaged in construction of stadiums and other huge infrastructure projects in line with international standards. It is has prompted world soccer body FIFA to also pressure Qatar and is demanding that FIFA make labor conditions one of its criteria in awarding future world cups.

The Human Rights Watch report documents what the group describes as “pervasive employer exploitation and abuse of workers in Qatar’s construction industry, made possible by an inadequate legal and regulatory framework that grants employers extensive control over workers and prohibits migrant workers from exercising their rights to free association and collective bargaining.” It also addresses the government’s failure to enforce laws that on paper are designed to protect worker rights and lays bay that workers face in reporting complaints or seeking redress.

“The government needs to ensure that the cutting-edge, high-tech stadiums it’s planning to build for World Cup fans are not built on the backs of abused and exploited workers,” Human Rights Watchs’s Middle East director Sarah Leah Whitson said at the launch of the report in Doha. “Workers building stadiums won’t benefit from Qatar’s general promise to end the sponsorship system. They need a deadline for this to happen before their work for the FIFA games starts.”

The report focuses among other issues on worker safety, highlighting the discrepancy between the number of construction worker deaths reported by foreign embassies and the number reported by the government. Like ITUC, the report uses the reporting on Nepali deaths as one of its case studies.

While the Nepali embassy reported 191 Nepali worker deaths in 2010, and the Indian embassy reported 98 Indian migrant deaths — including 45 deaths of young, low-income workers due to cardiac arrest, so far in 2012 — the labor ministry listed only six deaths in the past three years.

The Human Rights Watch follows an earlier ITUC study that equated the working conditions of primarily Asian foreign laborers in Qatar as modern-day slavery. Ms. Burrow said in a statement prior to her meeting with Mr. Hamidi that she would “set out for Qatar’s Labor Minister the legal steps the government needs to take to ensure freedom of association and collective bargaining for its huge migrant workforce. Labor laws introduced in Qatar should be in line with international standards as set out by the ILO.  The law needs to allow workers the right to form and join their own unions, and freely elect their own representatives without the government dictating who they can vote for,” she said.

Ms. Burrow noted that labor conditions were one reason why the International Olympic Committee (IOC) last month disqualified Qatar’s bid to host the 2020 Olympics. “The IOC’s evaluation of Doha’s Olympics bid stated ‘training and accommodating an experienced Olympic Games workforce to deliver this infrastructure within the required timeframe presents a major challenge and risk,’” she said.

One Response to Qatar 2022: Report Puts Focus on Worker’s Rights