Turning A Blind Eye To Underage Workers in Jordan 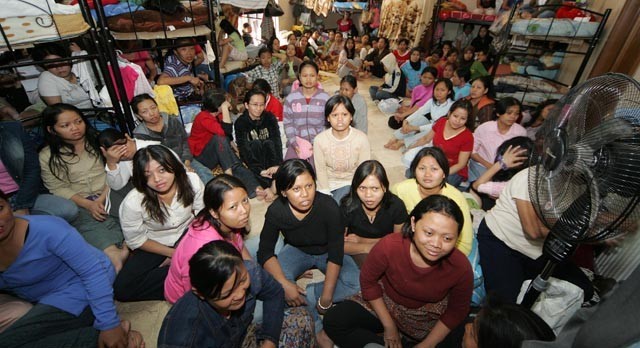 When Basima Fayez hired a domestic helper to live with her and take care of her home, she felt a sense of relief that someone was finally coming to her aid.

But soon after Nour arrived in Jordan from Indonesia, she fell ill and did not leave her room for two days. Worried about her health, Fayez urged her to visit the doctor only to find menstrual blood on her mattress.

Nour was completely oblivious to her body’s sudden changes.

It wasn’t until Nour made a tearful admission to stealing toy dolls that Fayez felt completely certain that Nour was well under the minimum age requirement of 21.

Like many others in Jordan, Fayez was distraught over her domestic helper’s age, but she chose to not report her to the Indonesian embassy. Nour continues to work in her home and she was never reported as an underage helper.

There are no official reports on how many underage, foreign domestic helpers reside in Jordan. With over 35,000 undocumented domestic helpers, the numbers could be in the thousands. And like Fayez, 90% of Jordanian employers keep their underage domestic helpers even after learning their real age.

Linda Kalash, president and founder of Tamkeen Centre for Human Rights and Legal Assistance, said it all comes down to money.

“These families pay a lot of money to bring them, and they consider it as an investment,” Kalash said.  “The domestic helpers agree to do the job because they need the money.”

Fayez knew she wouldn’t be refunded the 2,000 JD she invested in bringing Nour to Jordan. Like thousands of other domestic workers in the Middle East, Nour was providing a stable source of income for her family in Indonesia.

“Part of the problem is the public doesn’t know it’s a crime,” Kalash said. “They think if the worker agrees to work then nothing is wrong.”

Who is at Fault?

Kalash warns that the blame is shared among many parties.

Jordan is home to over 33,000 local children in the workforce. While government officials began cracking down on labor companies who employ young boys for cheap labor, it is difficult to monitor what occurs in the privacy of people’s homes. Recent statistics find that between 2008 and 2012, child labor in other sectors has declined, but the number of children working as domestic laborers increased by 9 percent.

Kalash maintains that investigations should start at the border. Yet Jordan officials do not properly screen the domestic helpers, and medical workers fail to raise any flags during the girls’ health checkups.

“These girls pass through many agencies and people. They all know they are underage,” Kalash said. “How did we discover it? We simply asked these girls how old they were. They would answer, ‘You want my actual age or the age on my passport?’”

Fayez insists she never thought Nour was underage when she selected her from a yearbook-like magazine of potential domestic helpers. While many Indonesian parents like Nour’s pressure their underage daughters to work abroad, recruitment agencies share most of the blame.

Recruitment agencies don’t tend to allow employers to exchange their domestic helpers, but if a domestic helper broke the law or was found to be underage, they must be deported.

The employer, however, does not get reimbursed, and the recruitment agency chooses to do as they please with the underage worker.

“The recruitment agencies don’t even send the girls back home,” Kalash said. “They are shuffled to other families. If a girl is transferred, the agency makes more money and benefits.

Kalash compares this to trafficking and says the crime of employing an underage worker becomes more and more multifaceted.

“In Jordan it’s difficult to prove that this is trafficking,” Kalash said.  “The court may not consider it to be so, but we are working on this.”

A recruitment agent, who spoke on the condition of anonymity, denied that his company recruits any underage girls from Indonesia.

“We do not have any such girls with us, and we would never allow it,” he said. “Their passports prove this.”

The Tamkeen Centre believes the most effective solution is to report all underage domestic helpers, but this will continue to be the largest challenge.

“Jordanians need to report these cases to the police,” Kalash said. “And these girls have to refuse to stay and refuse to work.”

None of the recruitment agencies in Jordan have been fined or shut down for bringing underage workers into the country.

Tamkeen Centre is conducting training for judges, lawyers, prosecutors, and the Ministry of Health. Their focus is to help them identify trafficking victims and punish agencies in line with current anti-trafficking laws. Jordan currently sentences child traffickers to 6 months to 3 years in jail.

The Tamkeen Centre also meets with underage workers who have left their employers.

33 young girls from various Asian countries recently met with Kalash to discuss their struggles of being underage and overworked. Most workers were originally from Indonesia, which stopped sending female workers to the Middle East near two years ago after multiple reports of abuse emerged. Since the moratorium was implemented, however, the flow of workers into the country never stopped, and more than 3,000 Indonesian workers have arrived in Jordan by booking flights via a third country.

Kalash hopes to raise awareness about underage domestic helpers in Jordan and stresses that the topic should be discussed, and the moratoriums must be respected.

“Many won’t admit that this is an issue,” she said. “We need the officials help and the media’s help to remind people that this is a crime.”

Domestic helpers around Jordan also do not openly admit that child labor is prevalent in the region, fearing that the country could prohibit future employment opportunities.

“There aren’t any helpers who are younger than 18 in Jordan,” said Aneesa, a Bangladeshi domestic helper. “If you think you met one, then you are wrong.”

Sawsan is an Arab-American freelance reporter and is currently in California. She has a Bachelor's degree from UC Davis in International Relations, with minors in Communication and Middle East South Asia Studies. When Sawsan is not in the U.S., she is freelancing in Amman, Jordan.