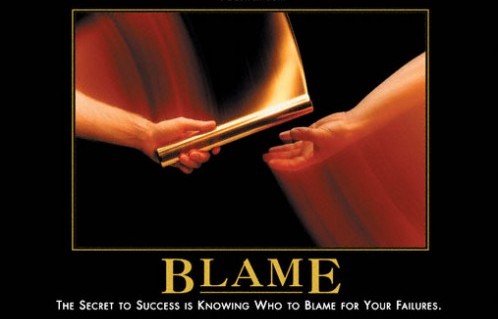 I missed this Arab News piece from a couple of days ago. It’s an op-ed by Dr. Khalid Alnowaiser, a Saudi columnist and attorney, saying it’s time for Arabs to give up the simplistic—and useless—game of blaming America for everything that goes wrong in their lives, the region, the world. As one who’s confronted the inane blame arguments for more than two decades, I can only agree. No, the US is not pure. No, not every element of its history is faultless. No, just because other people do worse things does not excuse bad behavior by America. But to think it responsible for all wrongs in the world is seriously demented. (Commenters to the article note that Jews and Israel are also and often cited as ‘the cause of it all’ with no more logic.)

It’s refreshing to see an article calling for Arabs to stand up and take responsibility for their own failures. The lack of that willingness to acknowledge that one’s own self might be a fault is distressing, but all too common in the region. It seems that it’s always somebody else’s fault. That is a tiresome argument.

Let’s stop blaming America
We are still the prisoners of a culture of conspiracy and inferiority
DR. KHALID ALNOWAISER | ARAB NEWS

AM a proud and loyal Saudi citizen, but I am tired of hearing constant criticism from most Arabs of everything the United States does in its relations with other countries and how it responds to global crises. No nation is perfect, and certainly America has made its share of mistakes such as Vietnam, Cuba and Iraq. I am fully aware of what happened when the atomic bombs were dropped on Hiroshima and Nagasaki and the unprecedented abuses at Guantanamo and Abu Ghraib. However, what would we do if America simply disappeared from the face of the earth such as what happened to the Soviet Union and ancient superpowers like the Roman and Greek empires? These concerns keep me up day and night. It’s frustrating to hear this constant drumbeat of blame directed toward the United States for everything that is going wrong in the world. Who else do we think of to blame for our problems and failures? Do we take personal responsibility for the great issues that affect the security and prosperity of Arab countries? No, we look to America for leadership and then sit back and blame it when we don’t approve of the actions and solutions it proposes or takes.

One Response to ‘Time for Arabs to Stop Blaming America’: Commentator