The Trials of A Moroccan Cab Driver in Ramadan 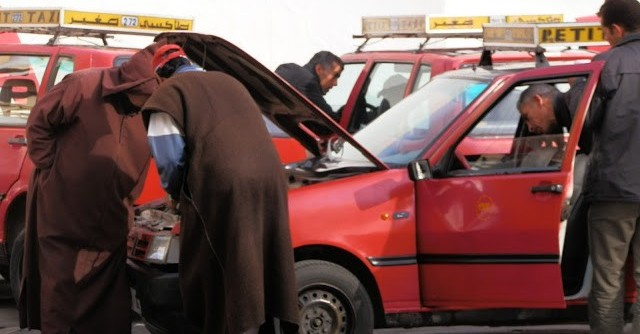 The effects of fasting and particularly lack of water on a human being is the reason that airline pilots are forbidden to fast during Ramadan. A lapse of concentration in the street is one thing, but a lapse at the controls of an airbus could have major consequences. Sadly the same logic that bans airline pilots from fasting does not apply to people driving cars.

For the record, after not seeing a traffic accident for several weeks; two days into Ramadan a driver of a private car and a taxi had a minor bingle on a main road in Fez. A day later and I had witnessed three more accidents.

As Hamid, a taxi driver for the last three years, told me, “People don’t concentrate as hard when they are fasting.” At this point he is driving fifteen kilometres over the speed limit on a main city street. As we swerve to avoid a pedestrian who has decided that crossing against the lights is a good idea, he shakes his head. “Totally crazy! You get my point?” I get it and at the same time wonder if I would have been better off as a pedestrian myself.

“And the passengers?” Hamid shakes his head again. “They argue about the fare, they change their mind about where they want to go and they even criticise my driving.” I grip the side of the seat as we take a roundabout at full speed and just make it through some lights that are blinking orange.. I say nothing. “And they complain about everything.”

“Like the fact this year Ramadan coincided with the holidays and so people all think they have made the wrong decision. Do you go on holiday while you’re fasting? Or do you fast and wait until Ramadan is over? And the lucky ones have escaped to France where nobody cares about fasting and feasting.”

He looks at me as if shocked. “Me? You think I can afford a holiday?”

As the taxi pulls into the supermarket, the mood is on the lower end of convivial. Getting out of the taxi is made more difficult by the fact that five middle-aged Moroccan women, laden with shopping bags, have decided that this taxi is theirs. The driver shouts that he can only take three people and then asks them politely if they can stop fighting long enough to let me out of the cab. I finally make it to the pavement and walk away quickly while the women discuss the fact that four into three is not a viable proposition.

The plus side of these minor explosions of human temperament is that they are like fire-crackers rather than volcanos. A heated argument erupts and then ends just as quickly. Few have the energy to prolong a conflict.